How looking for cancer's causes became a political act 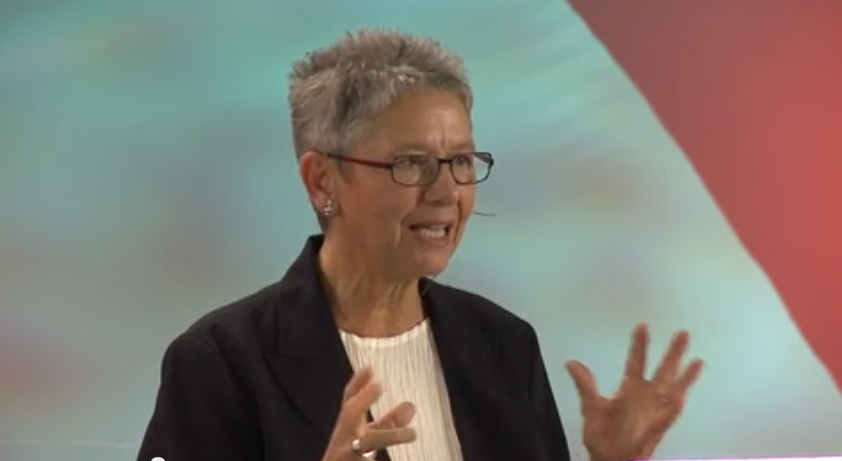 How looking for cancer’s causes became a political act

How does real political change happen?  Jeanne Rizzo has spent decades figuring that out — but not along any typical route. First a psychiatric nurse, then a concert hall manager and film, music, and theater producer, she gradually became more and more involved in the Breast Cancer Fund — a national nonprofit that is unusual in focusing on investigating what causes breast cancer rather than how to cure it.

Recently, Rizzo spoke to me about how a music producer gets pulled into the world of legislative politics — and how she figures out what to do when she gets there.

Q. You ran the Great American Music Hall in San Francisco, and worked as a music and film producer. How did you go from that to President and CEO of the Breast Cancer Fund?

A. Right — that’s a progression you wouldn’t expect to see on a resume. I started out as a nurse. I always did some pro bono volunteer work. I did a lot of work around AIDS. I held benefits at the Great American Music Hall. Later, many of the women who stepped up and volunteered to help with the AIDS epidemic began getting breast cancer diagnoses, so I began to work around that too.

Andrea Martin, who founded the Breast Cancer Fund, asked me to be on the board, and while I was there I did things like get the fund to go on the road with Lilith Fair. The whole time I was learning more, getting more into the science around breast cancer. I kept my nursing license up. Science doesn’t scare me. I know how to read a study.

Then, in 2001, I was at a board meeting and Andrea, the founder — something clearly wasn’t right. I took her to the hospital and it was a brain tumor. She lived for another two years, but she was never able to work again.

I told the board, I will stay on and manage this for three months, and then you have to find someone else. Then I said, “Okay. I’ll stay for 18 months. After 18 months I won’t be here anymore.” We had a lot of missions back then. I cut out most of them and focused ours on the environment — the possible causes of cancer. To me it was obvious that we ought to be investing more in prevention.

Q. And that’s unusual, because most breast cancer organizations seem to focus on early detection and treatment.

A. The easy money is there. In the ’90s that’s what people wanted. They wanted a pink ribbon on everything and a mammography machine on every corner. The American Cancer Society was spending money on cosmetics and wigs to make patients feel better.

Andrea had been finance director for Senator Dianne Feinstein. She had breast cancer twice, and the cost of treatment chemicals and radiation — that piqued her curiosity. She wondered, why are breast cancer rates going up in Marin County? They’ve been dramatically higher since they first started collecting data.

Q. Did anyone ever figure out why they are higher?

A. The thing about women in Marin and cancer was very high-profile when it came out. But the way that stats are put together — that’s a very demographically similar group of people in one place. 98 percent of the women in Marin were white, and middle class. A lot of them were on hormone replacement therapy. If you looked anywhere and started separating out white middle class women, those statistics began to look less unusual. They aren’t the only high-risk group. We are very concerned about women firefighters — the occupational exposure research for them is totally underfunded. Premenopausal African American women have the highest cancer increase across the board, possibly because of obesity rates and early puberty. And early puberty is partly caused by endocrine disruptors in the environment.

When we first started doing State of the Evidence documents on science linking breast cancer to environmental contamination, there were 138 citations. There’s a lot we didn’t know then that we know now. We didn’t know that low doses over time were more dangerous than a single exposure to a high dose. We didn’t know that certain women have a genetic disposition to get cancer from hormone replacement therapy. Now when we put together a State of the Evidence paper we have over 900 citations, and that’s about half of what’s out there. We’re always having to think, how can we unveil, unwrap this and make it into policy that is understandable for the consumer?

A. The big goals would be the reform of the Toxic Substances Control Act (TSCA) at the EPA and a complete overhaul at the FDA. At the FDA, the Cosmetics Safety Act needs more authority and leverage. And the TSCA is antiquated government. We’ve been trying to get that replaced for so many years. We haven’t even been able to ban asbestos in this country. The interagency part is totally flawed between the FDA and the EPA, too. Right now the two organizations don’t have to harmonize.

I start with “What do I really want?” and then go to: “What can I get?” Part of it is we’re not a political organization. We don’t do electoral politics. So we have to live with who gets elected.

Q. How did you learn how to navigate politics?

We have to look at legislation closely to see if it’s something we still support, or if we have to fall on our sword and say “We won’t support this bill.” The cosmetics database wasn’t everything we wanted, but it did more good than harm.

Q. What was something you had to withdraw support from?

A. We’ve been trying to reform the TSCA for years. And then there was this bill: The Chemical Safety Improvement Act (CSIA). It was a bipartisan effort. One of the sponsors, [New Jersey Sen. Frank] Lautenberg, wrote it on his deathbed. People really wanted to get it passed.  “It’s bipartisan. It’s Lautenberg’s legacy. It’s going to reform TSCA.”

I sat up all night reading it and I realized, “No it’s not.” There were no timelines for when things should be done. There was a fear that it would take away the power to regulate that the states had. It didn’t define and explicitly protect vulnerable populations. It became clear that this was a really bad bill.

We continue to work on getting some form of toxic reform. We really want to see safer alternatives. We need a set of standards for substitution, so that someone can’t take BPA out and put BPF in.

We’ve been going back and forth on cosmetics legislation for so long. With the California Safe Cosmetics Database I thought, “What are companies most afraid of? Companies don’t want people to know what’s in their products. These ingredients are trade secrets. The database was a way to get people information without giving away those secrets. And we wanted a way that if anyone was violating Prop 65, we could find out. The fact that they fought us so hard in the beginning let us know that we were right.

We got it passed in 2005, after working on it for three years. They kept stalling. It wasn’t in the budget. The industry fought it tooth and nail. They knew it was happening and were reformulating their products even as they were fighting it.

Q. Has the Obama administration changed anything?

A. We had a sweetheart period — a couple of years when we could move things through. But now, you’ve got such adversarial politics. He’s got his own hands full getting Obamacare through. You think of what administrative things can you do that will not require more legislation.

Q. What about California. Are things easier now that Jerry Brown is governor?

A. We actually got a lot done with Schwarzenegger. Under Schwartzenegger we got the Green Chemistry Bill.

Brown is a fiscal guy. He’s not the biggest environmentalist. But he has made some really good appointments. And there are other things. The flame retardants. Kamala Harris, going after the salons that do the Brazilian blowout. I don’t think another Attorney General would have been so actively engaged in an environmental case.

A lot of what we do — it’s not sexy. I will say some part of our time is spent against bad things. It’s hard to put that in an annual report: “We stopped this bad thing from happening.” I spent two and a half years working on a report on the environment and cancer after The Breast Cancer and Environmental Research Act passed. People said “Jeanne, do you really want to do this? Do you want to spend Saturdays working on this? Do you want to travel all over the country for meetings on this?”

The report came out in February. This is bona fide research. Twenty-one people and two and half years in the making. Outside peer reviewers. It was an answer to what could be done with breast cancer and the environment. There’s been nothing. Radio silence.  I would hope that the NIH and the Cancer Institute has read it. Health and Human Services. Congress mandated this. Howard Berman is the only person who has talked about the report in public and embraced it.

Now we use it.  We bring it forward and we say, “This is the President’s Cancer Report.” It’s very demoralizing if you let it be. We have to just say, “Well, we have a great document.”

If the report came out and said “We should be doing chemoprevention” or “We should be looking for a virus” you can bet the drug companies would have ponied up for more research in a second.

A. And you should never hear about it. Because it’s a terrible idea. But that’s what the pharmaceutical companies tout. Under primary prevention in the report, I got it put in that chemoprevention was not recommended. That was worth fighting for.

But then, sometimes, you will get a victory. We didn’t get a ban on toluene in nail polish — companies just took it out because consumers began to realize it was bad.

We had this toxic toy bill. We had meetings for awhile. We had hearings for awhile. And then Dianne Feinstein — we have a long relationship with her, because of Andrea — her office calls: “We want to take that toy bill to the senate.”

Really? What does Dianne Feinstein care about toys? But for her — most of the toys are imported from China. There had to be something there that had nothing to do with us. Getting three phthalates banned from toys in Washington D.C. is a miracle. We still don’t know how we did it. We like to claim total victory. But there are larger forces at work.