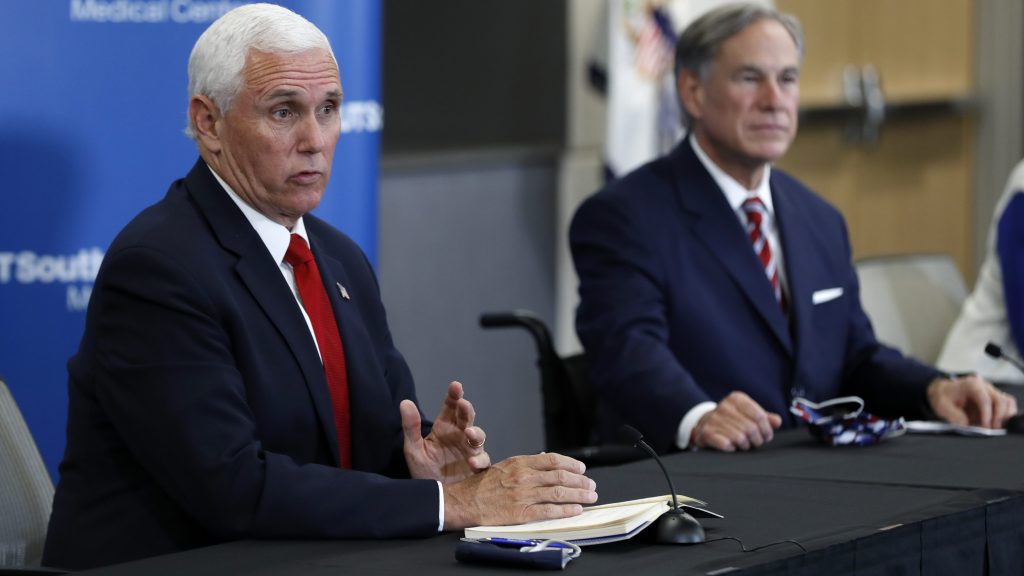 Taking no responsibility for coronavirus infections raging to new records amid the rash reopenings of businesses, beaches and bars, the White House and governors are now playing the role of Aristotle: They blame the young for bringing us down.

Leading this ancient lament on excessive juvenile gratification is Vice President Mike Pence. Over the last week, as infections rose in 38 states and Puerto Rico, according to tracking by the New York Times, Pence admonished Americans under 35, saying they bear “particular responsibility” to not infect their elders. He urged them to wear masks to blunt the spread of the virus. On CBS’s Face the Nation, he wagged his finger at partying younger adults, saying they may “have disregarded the guidance that we gave.”

It is impossible to regard Pence as the nation’s nanny when he and President Trump have actually offered little guidance during the worst pandemic in modern medical history. Despite 126,000 Americans being dead, Trump rarely wears a mask. Rather, he has speculated on efficacy of ingesting disinfectant, promoted off-label use of the anti-malaria drug hydroxychloroquine — which the National Institutes of Health says confers no benefit — and went the last half of May without speaking with his infectious disease expert Anthony Fauci. The president’s March prediction of 50,000 deaths will likely be tripled in a month and may soar beyond 175,000 fatalities by October.

Both Pence and Trump are back at rallies and appearances where supporters and choirs shout and sing unencumbered by masks. There was no scolding by the administration of 20-somethings at Trump’s recent young conservative voter rally in Phoenix where masks were roughly as evident as Black Lives Matter t-shirts.

Following suit in viral hypocrisy are Trump-supporting governors who have overseen some of the nation’s most disastrous reopenings. Take Florida, which according to public health experts, has had a more than 200 percent spike in cases in its rolling 14-day average. The state saw 9,585 new coronavirus cases on June 27, seven-and-a-half times more than the previous high during April and May. Governor Ron DeSantis blamed younger adults for creating cramped conditions in bars – that, mind you, he reopened — where “caution was thrown to the wind.”

In Texas, Governor Greg Abbott blames 20-somethings for that state’s nearly 140 percent rise in its rolling 14-day average of cases. That includes a new record of high of 6,584 infections on June 24, more than triple the single-day record during April and May. Abbott complained that young adults are “not wearing face masks, they’re not sanitizing their hands, they’re not maintaining the safe distancing practices.” (This is quite the umbrage from a governor who banned municipalities from issuing mandatory mask orders with penalties, and only just now is looking the other way as localities are implementing them anyway in a desperate bid to fight the virus.)

To be clear, the frolicking of the young is being noticed in Democratic strongholds where the virus is ablaze, but they are not being assigned complete blame. In California, Governor Gavin Newsom is also blaming playdates, birthday parties, and adult family gatherings. Such events invariably are organized by parents and older adults.

As for the White House, DeSantis, and Abbott, even Aristotle might shake his head over a septuagenarian president who is burying science wherever he can, a sexagenarian vice president who was slow to address HIV/AIDS as governor of Indiana, and a host of lapdog governors past the age of 40 telling us to behave as they reopened unsafely, without a sustained decline in cases and without robust testing and contact tracing in place. National Public Radio and Harvard’s Global Health Institute reported Tuesday that only four states are doing enough testing to suppress the virus. DeSantis, Abbott, and Georgia Governor Brian Kemp are among the COVID hotspot governors who have been accused of cherry-picking, manipulating, or ignoring data to justify reopening.

Their own poor behavior on COVID-19 is a logical outcome of their general disregard for science, public health, and the environment. DeSantis this winter received a D from the Florida chapter of the Sierra Club for his performance on environmental protection. Abbott runs a state where environmental spending was cut 35 percent between 2008 and 2018. The governor’s blaming of the young is the latest volley in a generational battle, where baby boomers and older Gen Xers create a hot mess and then place an undue burden on younger people to save humanity.

That is literal with climate change and the planet frying up. Witness the sharp rise in youth climate activism over the past several years, where 20-somethings and teens — like Greta Thunberg and the members of the Sunrise Movement — have pointed their fingers at the older generation for dragging its feet on climate change. Instead of being moved by the pleas of the young, Trump and Treasury Secretary Steven Mnuchin have belittled them, specifically Thunberg. Our supposed leaders, instead of mandating or modeling the behaviors needed to stem a crisis, are passing the buck to younger people even as their cowardice robs our youth of weddings, proms, and graduations.

Worse, it appears that game of relying on the young has infected more than the older fogies who told us to get back to work, get back in the barber’s chair, roll one down the bowling alley, and eat, drink and be merry. Administration officials who still have some credibility at coronavirus task force briefings or congressional hearings are joining the chorus.

Fauci and Centers for Disease Control and Prevention Director Robert Redfield recently singled out people under 40 as having a societal responsibility not to spread the virus. After saying last week that the coronavirus has “brought this nation to its knees,” Redfield on Tuesday told a Senate hearing: “It is critical that we all take the personal responsibility to slow the transmission of Covid-19 and embrace the universal use of face coverings. Specifically, I’m addressing the younger members of our society, the Millennials and the Generation Zs — I ask those that are listening to spread the word.”

As necessary as it is for all of us to take personal responsibility on COVID-19, it is scary to see Fauci and Redfield creep down the same road as Pence and the red-state governors. Surely they know in their hearts who told America that the water was fine and firewater could flow again. If health officials are going to tell us that the young are silent time bombs for the virus, they also have to tell us who lit the fuse. It was not the 20-somethings.