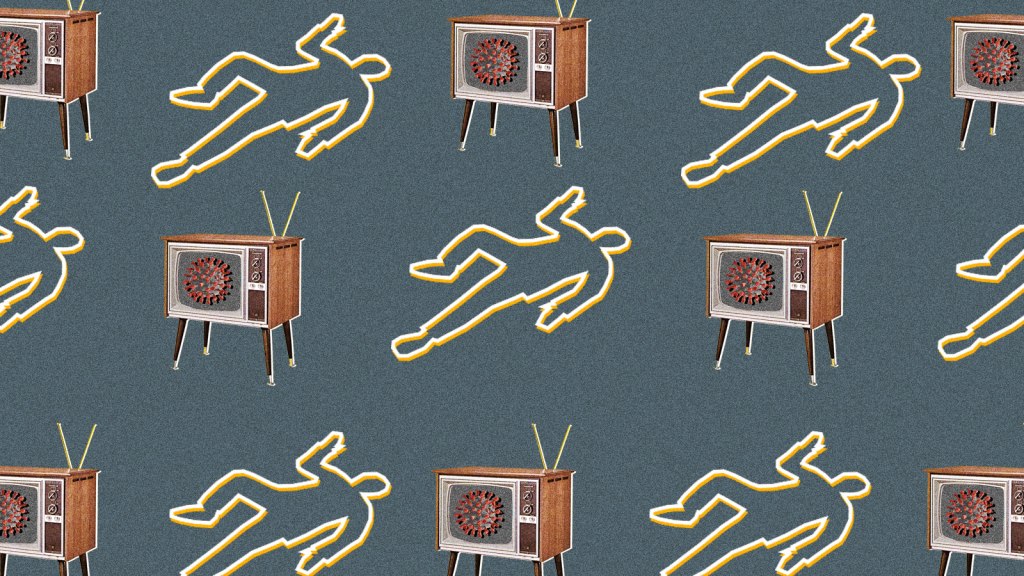 Salmon Arm is a little town of 17,000 in central British Columbia, not far from busy ski slopes in the Canadian Rockies. It’s home to stunning blue lakes, tree-covered mountains, and a worrying number of signs claiming that COVID-19 is a hoax.

But maybe less than there used to be. Tim Walters, a professor of English at Okanagan College, has been tearing down the signs one by one since they started appearing a few months ago. The signs demand B.C. “wake up” and sport a hashtag tied to QAnon, a far-right conspiracy movement. By June, Walters was walking three or four hours a day, wandering in ever-widening circles, yanking down the signs wherever he went.

It’s become a “low-level obsession,” he said. “Because of how crazy they are, people don’t take these conspiracy theories seriously enough.”

The conspiracy theorists responded by putting their signs higher, 8 or 9 feet off the ground. But Walters is 6 feet 6 inches tall with long arms to match. People have been sending him directions to new signs in their neighborhoods that they can’t reach.

The reality is that fake news is killing people. Research shows that wearing masks could reduce the spread of COVID-19 by half, yet misleading claims about the safety of mask-wearing have proliferated. If everyone wore face masks in public, according to a model from the Institute for Health Metrics and Evaluation at the University of Washington, it could save an estimated 33,000 American lives by October.

“Misinformation about COVID is spreading faster than the virus itself,” said Gale Sinatra, a professor of education at the University of Southern California who’s writing a book about fake news and the public’s understanding of science. Epidemiological experts say that a pandemic is as much of a communications crisis as it is a public health emergency. It’s reminiscent of climate change — despite a mountain of evidence showing the devastating effects on our overheating planet, only two-thirds of Americans say they’re worried about it. That’s a sign that these messages aren’t reaching people, or perhaps that fake news resonated with them more.

As an added challenge, the climate crisis and COVID-19 have both gotten sucked into the vortex of polarization in America. And as the pandemic has stretched on, becoming the background of our lives, it’s activating many of the same psychological barriers that people face when confronted with climate change. “Everyone’s got COVID fatigue now,” Sinatra said.

Coronavirus denial shares many similarities to climate denial, the dismissal of the scientific consensus around global warming. It’s spread by many of the same people, and the arguments for these bonkers theories often sound a lot alike: a rejection of mainstream science, a story of governments plotting to manufacture a crisis, and a message that the best thing to do is just continue business as usual. So why should I wear a face mask?

Studies have shown that fake news spreads faster on social media than real news does. People on Twitter are 70 percent more likely to share false news than the real stuff. And it’s difficult to shut down. “Misinformation is unfortunately a bit more compelling than regular information,” Sinatra said. Conspiracists spin tales that are surprising and dramatic, like a plot twist in a movie — a contrast to the drumbeat of “COVID-19 cases are rising!” seen on the news every day. So short of tearing down posters, what can people do to shut down the spread of misinformation?

Taking misconceptions head-on is one option, Sinatra said. But it has to be done carefully, or it can backfire, because repeating wrongheaded claims in the course of refuting them risks spreading them even further. Repeating things makes them stick. As the linguist George Lakoff pointed out, when you tell people “Don’t think of an elephant” they can’t help but picture an elephant.

“Just saying ‘You’re wrong’” — that does not work,” Sinatra said. You have to explain why something is incorrect and offer a good explanation for a convincing counterpoint.

“My thing is, you always have to confront them head-on,” said Walters, who incorporates rebuttals into his English classes. He recently taught a college course about the climate crisis and found that many of his students were on the fence about the science at first, unsure of what was true, before reading assignments like David Wallace-Wells’ The Uninhabitable Earth, which educated (and terrified) them. Walters equipped his students with the facts about climate change and encouraged them to discuss what they learned with their friends and family.

One resource that could help them is the new Conspiracy Theory Handbook, written by two cognitive scientists, Stephan Lewandowsky and John Cook. It’s a free online source that offers tips on how to debunk conspiracy theories and talk to people who believe in them.

Even so, the best way to counter fake news might be to equip people with the tools to evaluate what’s fake and what’s real from the get-go. “It’s better to inoculate people preemptively against conspiracy theories rather than trying to go in afterward and undo the damage,” said Cook, a professor at George Mason University, in a recent interview with The Verge.

The problem, of course, is that those under the sway of misinformation aren’t willing to take the vaccine.

One nonprofit, the News Literacy Project, aims to help students across the country get savvy when it comes to identifying fake news and think critically about what they come across online. There’s evidence that this approach helps for people of all ages. One study from the University of Michigan found that people are less likely to trust, “like,” or share fake climate change news on Facebook if they read a few questions beforehand such as “Do I recognize the news organization that posted the story?” and “Does the information in the post seem believable?”

Scientists and public health experts are having a tough time in the COVID-19 pandemic, because they’re learning basic facts about the virus and how it spreads from week to week. They’re trying to communicate new findings to the public in real time, and evolving recommendations are bound to sow confusion. That’s one big difference between the two crises: Climate scientists got the basic story nailed down ages ago. “The science around climate change has been developing for decades,” Sinatra said. “COVID’s only been on the planet for the last six months.”