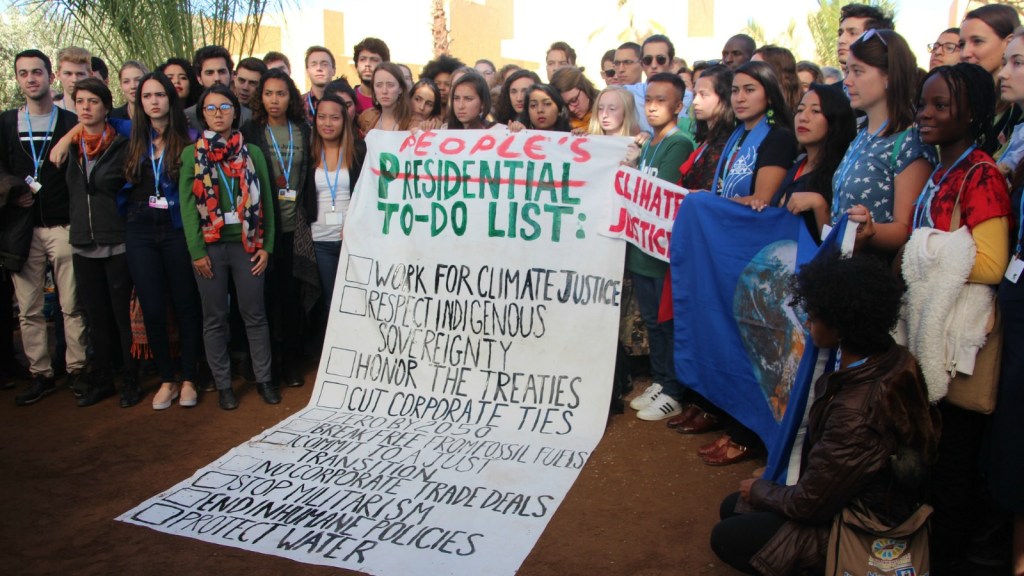 In the days leading up to Election Day, climate negotiators preparing for the U.N. climate conference in Marrakech, Morocco — aka COP22 — sidestepped questions about Donald Trump with cautious smiles. Now, participants are doing their best to sidestep global panic.

Still, among post-election feelings of fear, outrage, and physical danger lies a commitment to keep the current climate talks on track. In fact, there’s even cautious optimism.

“Everybody recognizes that there may be a challenge lying ahead,” says David Waskow, who’s in Morocco as director of the World Resources Institute’s (WRI) international climate initiative. “There’s planning going on, thinking through what are the next steps and how responses might be built. But in the negotiating room, everything we’ve heard, the tone has continued to be a positive one.”

Though President-elect Donald Trump has called the historic Paris Agreement “one more bad trade deal” and promised he would “cancel” it, negotiators are plowing on with or without him. If Trump were to reject the Paris Agreement on his first day in office, it would still take four years for the United States to fully extricate itself: the three years the government must wait before exiting the agreement and a one-year withdrawal period. Trump’s transition team is currently looking for a legal work-around that could see the U.S. gone from the agreement in a year.

“It’s not a matter of simply saying, ‘Sorry, see you later,’” says Waskow.

The agreement was built for some resilience. “The Paris Agreement was designed to be durable and survive shifts in political currents. There are plenty of signs that its goals are being internalized in the economy,” says Elliot Diringer, executive vice president at the Center for Climate and Energy Solutions (C2ES). “Countries are acting because they feel the impacts of climate change and see the economic opportunities in a clean-energy transition. None of that’s changed.”

The United States’ domestic drivers of change may also hearten the international community. Negotiators point to the cities, states, and businesses pushing a transition to renewable energy and integrating climate action into policies and plans. According to WRI CEO and president Andrew Steer, there’s “a huge amount at the subnational and corporate level” spurring progress. Alden Meyer, at the Union of Concerned Scientists, says the election won’t stall that movement. “The drive to de-carbonize the U.S. economy will continue regardless of what a President Trump does,” he said.

Waskow agrees. “That will be an important factor,” he says, “the context in which a new administration finds itself.”

Still, feelings of disappointment are palpable among conference attendees and the environmental community. “We cannot pretend that [the] election outcome was anything less than deeply disturbing,” said Nathaniel Keohane of the Environmental Defense Fund.

But that doesn’t mean all momentum is lost. Amidst the uncertainty, a renewed dedication from other countries has emerged. Celia Gautier with Climate Action Network (CAN) France points to how the European Union stepped in to the leadership vacuum left when the United States exited the Kyoto Protocol. “Regardless of how Donald Trump decides to act on climate, all countries — including the E.U. — have to step up,” she says. “The political landscape in the U.S. may have changed, but the reality of climate change hasn’t.”

Other parties at Marrakech remain hopeful that even if Trump intends to drag down global progress, he’ll be overpowered. “With the momentum we’ve seen this year, there’s no question that no one government, no one head of state — no matter how powerful — can stall the transformation unfolding before our eyes,” said Catherine Abreu, executive director of CAN Canada.

And according to Waskow of WRI, U.S. state department negotiators, led by Jonathan Pershing, are keeping their heads down in Marrakech. During the conference, the U.S. contingent will work to make good on the Obama administration’s climate commitments with the time they have left.

“The path forward has never been a straight line,” says Diringer of C2ES. Nov. 8 may have made the road through Paris more treacherous, but the international community insists it will stay the course.