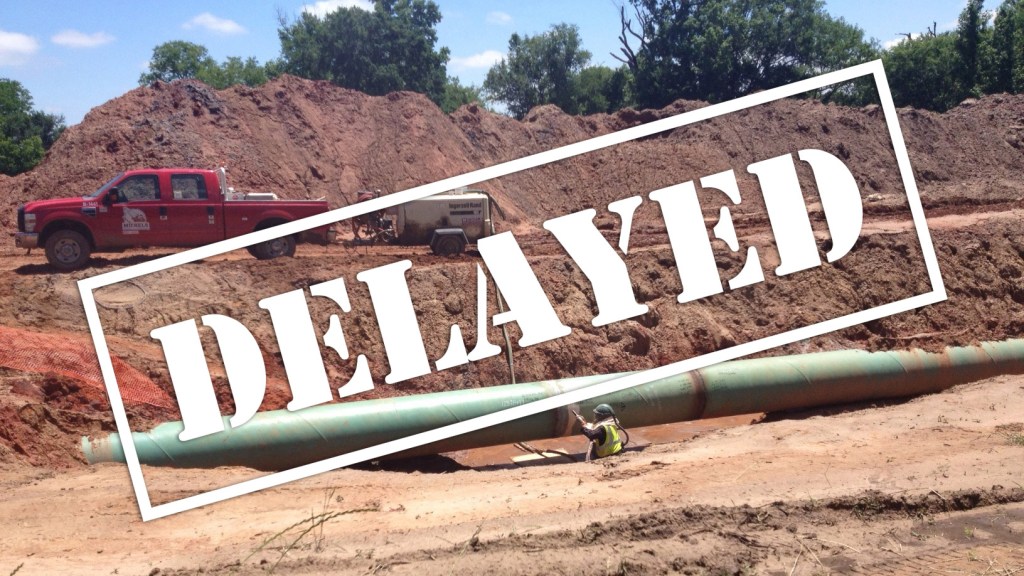 Stop me if you think that you’ve heard this one before: The Obama administration is delaying a decision on whether to approve the Keystone XL pipeline.

But this is different from all those past delays. This is a brand new delay — and it might push the final determination past the midterm elections. As Politico notes, “A delay past November would spare Obama a politically difficult choice on whether to approve the pipeline, angering his green base and environmentally minded campaign donors — or reject it, endangering pro-pipeline Democrats such as [Sen. Mary] Landrieu, who represents oil-rich Louisiana.”

The Washington Post explains the reasoning behind this latest delay:

The Obama administration has — again — postponed a decision on the proposed Keystone XL pipeline by giving eight different agencies more time to submit their views on whether the pipeline from Canada’s oil sands to the Texas gulf coast is in the national interest.

The 90-day period for interagency comments was supposed to end May 7, but the State Department extended that deadline, citing “uncertainty” created by a Nebraska Supreme Court ruling that could lead to changes in the pipeline route.

The State Department, which must make the final decision on the permit because it crosses an international boundary, said it would use the additional time to consider the “unprecedented number” — 2.5 million — of public comments that were submitted by March 7.

Queue the predictable outcry from pipeline supporters. That includes not just Republicans (though outcrying is their specialty) but also the 11 Democratic senators from red and swing states who recently wrote Obama a letter calling on him to quickly approve the project. “This decision is irresponsible, unnecessary and unacceptable,” said Landrieu, who organized the letter writers. She vowed to use her new position as chair of the Senate Energy and Natural Resources Committee to force approval. (Good luck with that.)

Republican Sen. Lisa Murkowski from the oil-loving state of Alaska called the delay “a stunning act of political cowardice” and said that “the timing of this announcement — waiting until a Friday afternoon during the holy Passover holiday in the hope that most Americans would be too busy with their families to notice — only adds further insult.”

The State Department is taking the most prudent course of action possible. … Getting this decision right includes being able to evaluate the yet-to-be determined route through Nebraska and continuing to listen to the many voices that have raised concerns about Keystone XL. The newly extended comment period will show what we already know: the more Americans learn about this project, the more they see that the Keystone XL tar sands pipeline is not in the national interest.

But 350.org slammed the administration for its procrastination. “It’s disappointing President Obama doesn’t have the courage to reject Keystone XL right now,” the group said in a release. “It’s as if our leaders simply don’t understand that climate change is happening in real time — that it would require strong, fast action to do anything about it.” Still, the group claimed a partial victory: “this is clearly another win for pipeline opponents.”

Anti-Keystoners will, of course, keep fighting the proposal. On Earth Day, April 22, they’ll kick off a Reject and Protect protest on the National Mall. “The encampment will feature 15 tipis and a covered wagon, and begins on Tuesday with a 40-person ceremonial horseback ride from the Capitol down the National Mall,” says 350. “Ranchers from Nebraska, tribal leaders from Nebraska, Minnesota and the Dakotas, actor Daryl Hannah, the Indigo Girls, environmental and social justice leaders, and others will take part at the encampment over the week.”

And Steyer has promised to help fund political candidates who oppose the pipeline. Politico reports that he “pledged Thursday to leverage his largely self-funded super PAC to support members of Congress who come under attack for their opposition to the proposed Canada-to-Texas pipeline.”