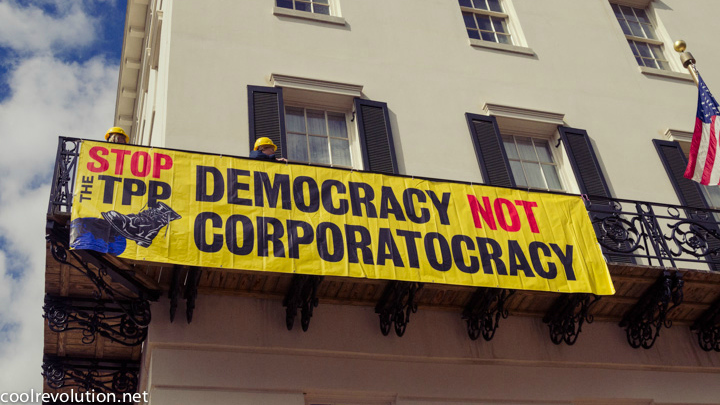 In a State of the Union address that hit most of the right notes on the environment and other progressive issues, Obama pushed one policy that has green groups up in arms: fast-tracking of trade deals. In a letter sent this week to every member of Congress, environmental advocates warned that two particularly far-reaching deals that are in the works could “significantly weaken public health and environmental protections.” The letter was signed by nearly 50 groups.

They warned that the Trans-Pacific Partnership (TPP), a deal with Asian and Pacific nations, not including China, and the Transatlantic Trade and Investment Partnership (TTIP), a deal with Europe, contain “rules that would grant foreign corporations the right to sue governments, in private tribunals, over environmental, public health, and other laws and policies that corporations allege reduce the value of their investment.” These agreements also contain “rules that would require the United States Department of Energy to automatically approve exports of liquefied natural gas to countries in the pacts with no analysis to determine whether exporting natural gas is in the public interest.”

That all sounds pretty bad. Obama, though, presented things in a different light in the State of the Union. He claimed that his trade policy will “level the playing field” for American workers as Asian economies grow. “I’m asking both parties to give me trade promotion authority to protect American workers with strong new trade deals from Asia to Europe that aren’t just free but are also fair,” he said. Labor groups disagree with about “leveling the playing field”; they say the deals might generate more income for American companies, but would do little to protect American workers’ jobs.

Negotiations on both deals have been going on for years, more or less in secret. Advocates and even members of Congress still don’t know exactly what’s in them. As details leak out, partisans are finding themselves with odd bedfellows. In a twist on the usual, mainline Republicans are on board with this Obama initiative. Senate Majority Leader Mitch McConnell (R-Ky.) has pledged to push for the fast-track authority the president wants, which would prevent Congress from amending any trade deal he presents — legislators would simply vote “yes” or “no.” Opposing Obama and McConnell are many Democrats, environmentalists, unions, civil libertarians, and a handful Tea Party Republicans who don’t want to give Obama any more power.

But, as Carter Dougherty reports at Bloomberg, the administration is successfully rallying the business lobby to get behind the deals — the same lobby that, 20 years ago, supplied the push needed to make NAFTA a thing. Caterpillar, of bulldozer fame, got its employees to write 17,500 letters to members of Congress supporting fast track. IBM has executives from all 50 states inviting members of Congress to tour plants that produce products that could be sold abroad.

For awhile, former Senate Majority Leader Harry Reid (D-Nev.) was standing in the way of fast-track authority going anywhere. But Republicans control the Senate now, and enough of them seem inclined to follow the lead of McConnell and the business lobby. “I’ve got a lot of members who believe that international trade agreements are a winner for America,” McConnell said after the midterms. “And the president and I discussed that right before I came over here, and I think he’s interested in moving forward. I said, ‘Send us trade agreements. We’re anxious to take a look at them.'”

Sen. Orrin G. Hatch (R-Utah) plans to introduce some legislation to give the president expanded trade powers next week. So, unless environmental groups and their motley assortment of allies can raise a loud enough alarm, the TPP — the president’s top trade priority — might get pushed through this year.