In his first State of the State address, a little over a year ago, Ohio Governor Mike DeWine took time out to recognize his “amazing” health and human services team, asking them to stand in the House Chamber of the Statehouse for applause.

“This strong, compassionate team will work together across agencies to save lives,” remarked DeWine, who had vowed to tackle major health problems afflicting Ohioans, including opioid addiction, infant mortality, and childhood exposure to lead paint. “They understand that kids have only one chance to grow up and that there is an urgency, therefore, in absolutely everything they will do.”

That team — led by Dr. Amy Acton, director of the Ohio Department of Health — has steered the Republican governor’s efforts to limit the spread of coronavirus and prevent fatalities. In mid-March, before Ohio even had its first confirmed case of COVID-19, DeWine closed K-12 schools ahead of any other governor in the country, limited mass gatherings, and postponed the state’s March 17 primary election. Today, Ohio has about 29,000 total coronavirus cases and over 1,700 related deaths, though Acton said Ohio “flattened the curve” of peak cases in early April.

“I’ve been very plain to the people of Ohio,” DeWine said during a May 12 audio panel hosted by the New York Times. “They’ve done a good job in keeping distance, by and large, but we have to continue to do that. The virus is still very much out there. It’s very tough, it’s very lethal, it spreads very, very well.”

DeWine, 73, has served in Ohio politics for over four decades, most recently as Ohio’s attorney general. A self-described “conservative Republican,” he took the governor’s office in January 2019. About 86 percent of adults in Ohio said they approve of how DeWine has handled the crisis, the highest rating for any governor, according to a recent Washington Post-Ipsos poll. Overall, DeWine’s response has won over 90 percent of Ohio’s Democrats and 84 percent of its Republican constituents.

Now, as Republican legislators and President Donald Trump pressure states to reopen their economies —and pockets of mask-less protestors urge the governor to lift restrictions while disparaging state health experts — DeWine has maintained a cautious approach. He has opened sectors slowly and requires facilities to meet safety protocols, even as the state shifts from stay-at-home orders to “strong recommendations,” as he put it.

Yet while DeWine has been willing to buck party politics and uphold scientific evidence on coronavirus, his performance on other health-related issues — namely, climate change and the environment — has been less consistent. Green groups have applauded him for his efforts to curb Lake Erie’s toxic algal blooms, which contaminate drinking water and harm human health. But they have derided him for signing a sweeping rollback of Ohio’s clean energy policies, a measure critics called the “worst” anti-renewables law to pass in any state.

Some environmentalists told Grist they’re cautiously optimistic that DeWine’s science-driven response to the outbreak will influence future decisions on climate policy — particularly given that Ohio’s warming summers, intensifying rainfall, and enduring air pollution threaten the health of adults and children. Other activists, like Addy Zenko, said they’re skeptical that lessons from coronavirus will carry over — or that the current governor would come to mirror his Republican predecessor, John Kasich, who has lately called for policies to address climate change.

Zenko, an ambassador for the nonpartisan climate group Defend Our Future, attributes DeWine’s mixed environmental record to “selective hearing” on science. “Throughout the coronavirus pandemic, he’s expressed the importance of science and listening to scientists,” said Zenko, who is an incoming sophomore at The Ohio State University in Columbus. “I hope that he can listen to the same facts about the climate.”

To Heather Taylor-Miesle, executive director of the Ohio Environmental Council, DeWine’s science-led strategy on coronavirus didn’t come as a shock. She co-chaired a task force that works with the governor’s office to tackle water pollution — primarily by keeping farm fertilizer and manure from flowing into watersheds and feeding nasty blooms of toxic algae. Past attempts to limit agricultural runoff met strong opposition from the state’s farm interests or fell victim to political infighting. But last year, DeWine successfully secured $172 million from the Republican-controlled legislature to launch H2Ohio, a statewide initiative to improve water quality in western Lake Erie and beyond.

“My experience with that process was all-star; he brought in scientists and economists, people who were unassociated with the stakeholders,” recalled Taylor-Miesle, who endorsed DeWine’s Democratic challenger Richard Cordray in the 2018 election. “I sat in meetings in [the governor’s] dining room with some of these scientists, and he’d be like, ‘Welp, that’s what they say we gotta do!’ So I have not been surprised by that kind of leadership [during the outbreak].” 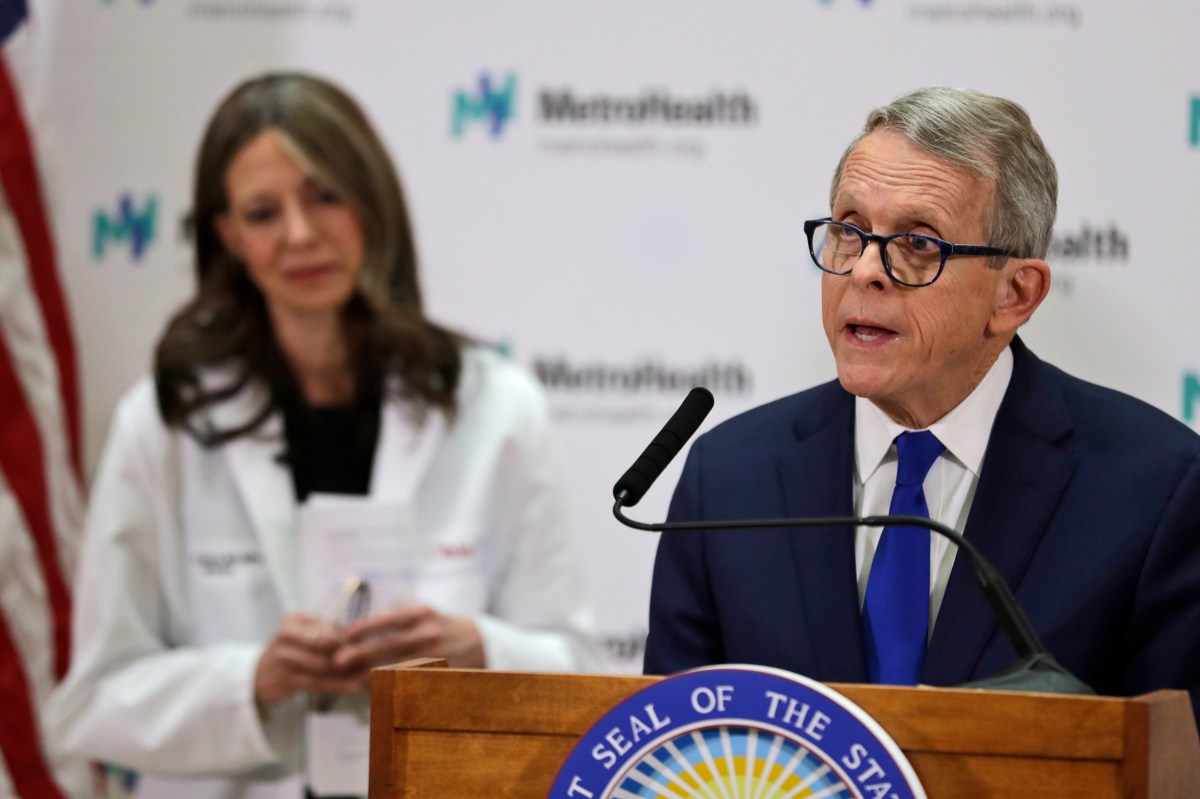 Ohio Governor Mike DeWine gives an update at on the state’s efforts to limit the potential spread of the novel coronavirus, while Amy Acton, director of the Ohio Department of Health, looks on. Tony Dejak / AP

Even so, Taylor-Miesle said she “still has bruises” from the fight over House Bill 6. The measure repealed Ohio’s renewable and energy efficiency standards and enabled more than $1 billion subsidies for the owners of aging coal and nuclear power plants. DeWine signed the bill into law last July, after years of lobbying by large utility companies. Kasich had opposed similar measures, citing the higher costs for electricity customers.

Ohio ranks sixth among U.S. states in carbon dioxide emissions and is the third-largest consumer of coal, behind Texas and Indiana. Ohio Environmental Council and other opponents said the measure will hinder Ohio’s efforts to develop clean energy projects, reduce energy use, and shift away from fossil fuels.

The bill’s passage “is a fairly good indicator [DeWine] won’t come around to being a leader when it comes to climate change,” said Amanda Woodrum, a senior researcher at Policy Matters Ohio, a nonprofit progressive research institute. “I think Governor DeWine is politically ambitious, and this unfortunately has become more and more of a divisive issue in Ohio.”

Isabella Guinigundo, a leader in the grassroots Ohio Climate Strike movement, echoed Woodrum. “Politically, it’s okay to listen to the scientists on COVID-19, because that’s the current crisis we’re in,” said Guinigundo, a high school senior in Cincinnati. “For the climate crisis, it doesn’t get him any of those political points to listen to what climate scientists have to say.”

As Ohio’s attorney general, DeWine was openly opposed to federal climate regulations. In 2015, his office joined a 24-state legal challenge against the Obama administration’s Clean Power Plan, which aimed to curb carbon emissions from coal- and gas-fired power plants. DeWine called it a “power grab” that would harm Ohio’s coal industry. (Trump replaced the Clean Power Plan with a much weaker rule last year.) As governor, DeWine has said he’s committed to reducing carbon emissions and supports an “all-of-the-above” energy strategy — reasons he offered when signing the measure that subsidizes Ohio’s nuclear plants.

Over the past year, in an effort to appeal to DeWine’s broader interest in protecting public health, green groups have sought to frame climate and air quality issues as explicit threats to Ohioans’ wellbeing.

Ohio advocates told Grist that COVID-19 has given new urgency to their efforts to link climate action and public health. “As painful as it is, we’re really hoping that this is an opportunity for Governor DeWine and his administration to look at both health and the environment and see them together,” said Kristi Tabaj, an advisory board member for Ohio Clinicians for Climate Action, a statewide group of health professionals. “I am optimistic there will be shifts in our conversations.”

Alan Lockwood, a member of the group and a retired neuroscientist, said he hoped that, as Ohio recovers from coronavirus, the state will transition to energy sources like solar and wind, which don’t pollute the air and imperil residents’ health. “Out of every disaster there are opportunities, and this is an opportunity,” he said, “that we can’t afford not to grasp.”

As the virus rages on, it’s still unclear how Ohio and other states will manage to rebuild their battered economies. On May 5, DeWine announced shrinking tax revenue would mean budget cuts of $775 million for May and June. He also halted new grant applications for H2Ohio, which could stymie the rollout of his landmark water quality program. State officials told reporters that H2Ohio “will continue to be a priority” even as future funding remains uncertain.

Meanwhile, climate groups are thinking similarly to Lockwood and are laying out new visions for Ohio and the region.

Policy Matters Ohio is helping to draft a blueprint for building a “21st century Appalachia,” Woodrum said. Her group and a variety of other organizations in Kentucky, Pennsylvania, and West Virginia are creating a regional investment plan that would put people to work by modernizing the electric grid, laying rail for passenger trains, building electric vehicle infrastructure, and boosting sustainable manufacturing.

Guinigundo of Ohio Climate Strike said her organization is part of a coalition developing a statewide Green New Deal. The policy will likely aim to repeal House Bill 6 and require Ohio to achieve net-zero emissions by 2050. It could also call for improving public transportation, providing stronger legal protections for wetlands, and ensuring that people who will lose their jobs in fossil fuel sectors will be taken care of, including through programs like employee retraining.

“We’re not incredibly hopeful he would pass it,” Guinigundo said of DeWine. “But we’re going to keep pushing him.”