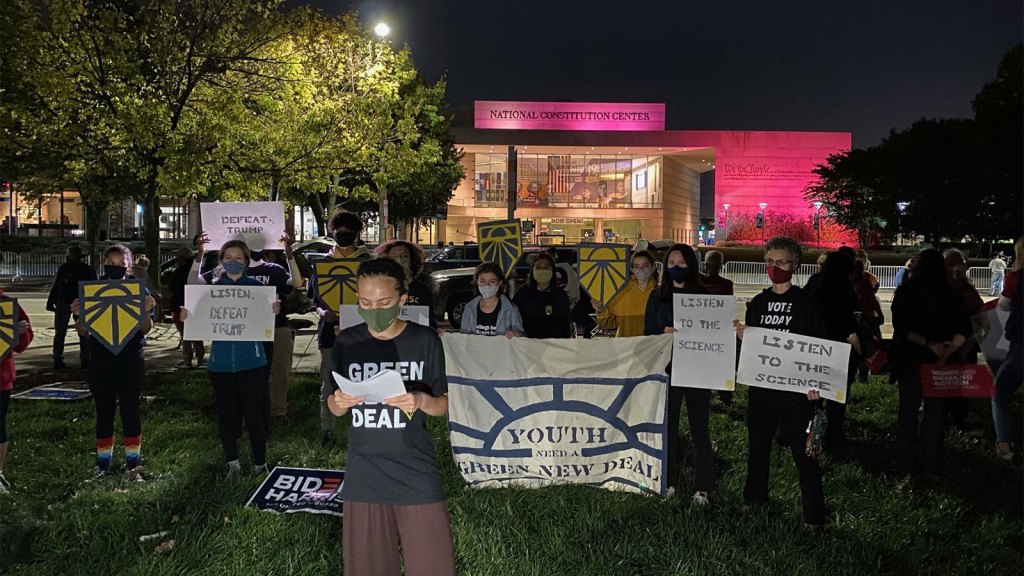 President Donald Trump and former Vice President Joe Biden held dueling town halls on Thursday night, broadcast on different networks, to answer questions about their plans for the country. Biden’s televised interview was generally more subdued than a debate with Trump would have been, but just outside the doors of the National Constitution Center in Philadelphia where the event was held, a group of protestors, not yet old enough to vote, were demanding that he think bigger about climate change.

A dozen or so members of the Sunrise Movement, many of them middle schoolers, stood on the lawn out front with signs that read “Listen to the science” and “Youths need a Green New Deal.” They weren’t protesting against Biden, per se — in fact, they were imploring people to vote for him. But they also wanted to raise pressure on the former vice president to take more aggressive action than he’s committed to so far.

“Joe Biden may not be the perfect candidate, but he has expressed his agenda to fight climate change,” said Eva McIver-Jenkins, an eighth-grader from Penn Alexander middle school, in an impassioned speech. “And although it may not be much, it is a greater deal than what Trump can ever dream of. Biden is the best chance we have to end this climate crisis.”

Leading up to the rally, McIver-Jenkins told Grist she was nervous but excited. It was her first time taking part in a Sunrise Movement protest. She joined the group, a progressive climate advocacy organization run by young people, this summer, after attending trainings with a few classmates where they learned how to start a new chapter at their middle school. The group had only met a few times when one of their mentors mentioned Biden’s town hall and asked if they wanted to plan a rally. They spent the next six days recruiting classmates to come, making posters and banners, and writing speeches.

“I have to say I was like, dreading and stressing it,” McIver-Jenkins said. “And then I got up and I started talking and I was like, ‘This is so cool.’”

McIver-Jenkins said she’s known about climate change since she was in second grade and was taught “the basics” — “our world is warmer, the ice caps are melting, polar bears are dying.” But she said it wasn’t until fifth grade that she really understood that climate change is the product of human activity, namely, the burning of fossil fuels. Now, as an eighth-grader, she’s passionate about the Green New Deal and wishes Biden weren’t wavering in his support for it.

“I’ve been seeing our country and our world be affected by climate change so much,” she said. “And people losing their lives and homes. So, the Green New Deal is a set of goals to get us past this climate crisis and to get us back on track.”

During the town hall, ABC News anchor George Stephanopoulos asked Biden about his hot-and-cold relationship with the proposal. “You say you’re not for it, but on your website it says you call it a crucial framework.”

“My deal is a crucial framework,” Biden replied. “Not the New Green Deal.”

Biden was actually the first to bring the Green New Deal up during the town hall, in response to a question from the audience about which clean industries he would bring to southwest Pennsylvania to replace fracking. First, he clarified that he did not propose to ban fracking but said he did intend to eliminate methane emissions from the practice. He also said the country would still be able to use some natural gas after developing new technology to capture the carbon emissions — a proposal listed in his current climate plan but that the former vice president has not embraced so publicly before.

Then Biden described how his plan would create millions of jobs to construct transmission lines, solar and wind farms, electric vehicle charging stations, batteries, and to retrofit buildings to be more efficient. He also proposed hiring former oil and gas workers to plug abandoned wells that leak methane, an idea that Biden also espoused during a previous town hall in September.

Although all of that sounds a lot like the portrait of the Green New Deal painted by Representative Alexandria Ocasio-Cortez of New York, one of its key proponents, Biden differentiated his proposal primarily by timeline: He said the Green New Deal’s goal to eliminate all non-renewable energy by 2030, a decade from now, is impossible.

But to the middle schoolers protesting outside, that deadline is important.

“We do not have another four years to waste. We do not have another year to waste,” McIver-Jenkins’s classmate, Betsy Okrant, said in her speech. “While any climate plan is a victory right now, his is timid and not the ambitious fight we need to wage in the next decade before what we are doing to this planet becomes irreversible.”