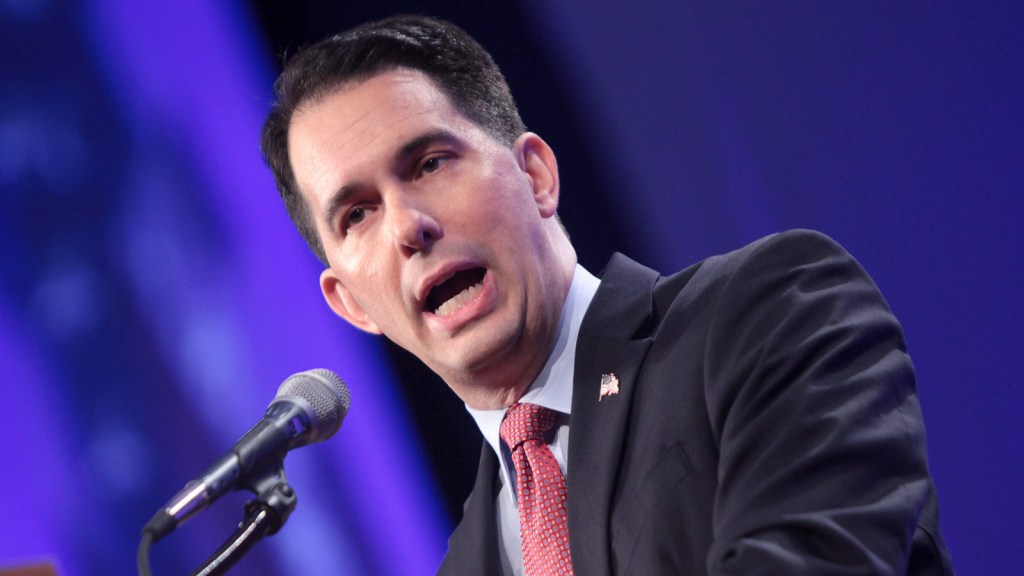 Despite being an intensely partisan conservative Republican, Wisconsin Gov. Scott Walker has never said outright whether he accepts the scientific consensus on climate change. This might lead you to incorrectly assume he is less of an extremist or deliberate ignoramus on environmental issues than his climate change-denying opponents for the Republican presidential nomination.

You would be wrong. Walker is not on record about whether climate change is real, but he is clearly opposed to doing anything about carbon pollution. As I noted in my guide to Republican presidential candidates’ climate change records, Walker has promised never to tax carbon emissions, and he has tried to suppress clean energy development in Wisconsin. From my piece:

Walker is a favorite of the Koch brothers — he notoriously kissed ass during a call with a prankster pretending to be David Koch. The oil oligarchs like him because he opposes governmental regulations, except for when the regulation stymies clean energy. Walker imposed regulations to keep wind turbines further away from homes and signed a pledge never to pass a carbon tax. He has also raised money for the Heartland Institute, an organization that spreads climate misinformation.

Now it turns out that Walker’s administration has also discouraged state agencies from discussing or studying the effects of climate change. Walker has attempted to disempower civil servants, including scientists, and tried to politicize the scientific fact-finding process. Scientific American posted a deep dive on the subject last week. Here are some highlights from the piece:

Walker has targeted the science and educational corps at the state’s Department of Natural Resources (DNR), which has responsibility for protecting and managing forests and wildlife, along with air and water quality. In his 2015–17 budget, released in February, he proposed eliminating a third of the DNR’s 58 scientist positions and 60 percent of its 18 environmental educator positions …

The Walker administration’s policy changes have been accompanied by efforts to weaken scientists’ role in policymaking. Even before taking office, Walker signaled his environmental agenda by appointing former Republican state senator and construction-company owner Cathy Stepp as DNR secretary, explaining that he wanted “someone with a chamber-of-commerce mentality” at the agency’s helm. Stepp, who does not have a background in science or natural resource management, had publicly derided DNR staff as “unelected bureaucrats …”

Although DNR researchers haven’t been explicitly forbidden from mentioning climate change … they nonetheless describe a “chilling effect” on discussion about politically controversial subjects. In November 2010 the DNR’s main climate change Web page was a rich portal containing detailed information about climate trends, forecasted impacts of climate change and DNR programs aimed at addressing the problem. The page also acknowledged that “the most renowned group of scientists working on climate change, the Intergovernmental Panel on Climate Change (IPCC), stated that it is very likely [more than 90 percent probability] that human activity is responsible for rising temperatures.” Today, the page contains a single paragraph describing, in general terms, a partnership with the University of Wisconsin to study the impacts of climate change and a link to the university’s project Web site.

The chilling effect is also evident in internal discussions, DNR scientists say. Sally Kefer, a land use expert who retired from the DNR in 2014, says that she encountered increasing institutional resistance to discussing climate change in the course of helping communities prepare for a warmer and wetter future. “I was being told to quit contacting the communities to determine their level of interest in having a discussion about climate adaptation,” Kefer says. “I was told to wait until they called me. And can’t I figure out a way to call it something other than ‘climate adaptation’? Can’t we just call it ‘sustainability’?” A current DNR scientist, who requested anonymity, says that the term “climate change” has become a red flag in internal grant proposals

Walker may not be the only Republican governor running for president who has discouraged or even prohibited civil servants from discussing climate change with the public. In New Jersey, as I reported last year, “The NJ [Department of Environmental Protection] avoids any mention of climate change or sea-level rise in its public communications pertaining to [Superstorm] Sandy.” New Jersey Sierra Club director Jeff Tittel says that civil servants in the NJ DEP told him that Gov. Chris Christie’s appointees instructed them not to discuss climate change or sea-level rise in relation to Sandy. (When asked by Grist, a spokesman for NJ DEP unequivocally denied that accusation.)

Republican governors have plenty of political incentive to discourage their state’s employees from honestly researching or discussing climate change with the public: They’re competing for the vast donations and outside expenditures of fossil fuel magnates. Walker has previously proven that he’ll pander to the Koch brothers, so it should come as no surprise that he would use even his state agencies to appeal to them.