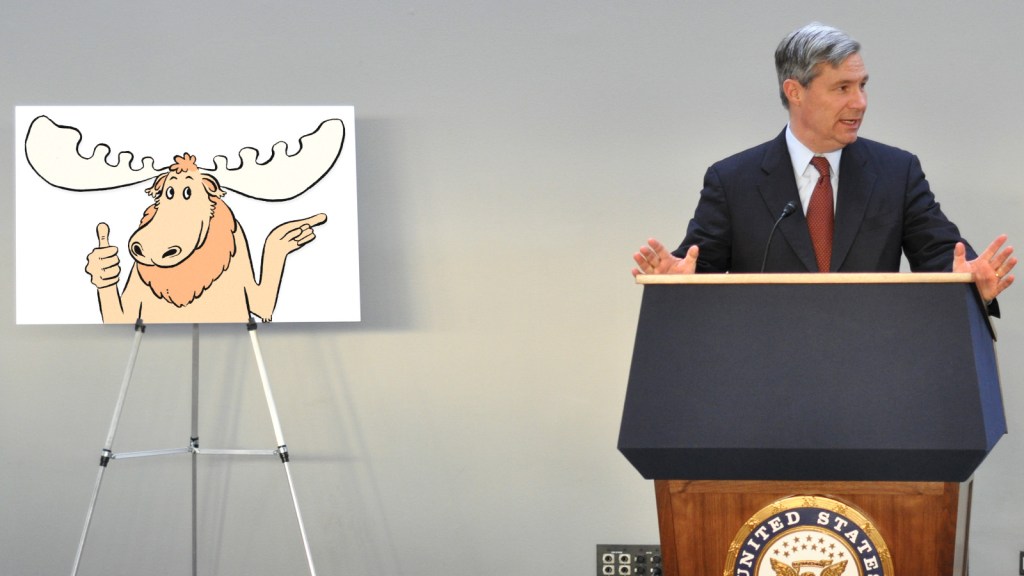 You may know Sen. Sheldon Whitehouse (D-R.I.) from such climate change-related events as the all-night talkathon in the Senate this past March, or the League of Superfriends-style Climate Action Task Force that he formed with fellow Sen. Barbara Boxer (D-Calif.). But being that senator who really cares about climate change is a gig that can take a person to some interesting places besides Washington, which is how, the Friday before Memorial Day, Whitehouse came to be seated at a folding table in the back of Zimmerman’s Ski & Snowboard in Nashua, N.H., surrounded by last season’s snowboarding gear.

“I’m very sad our maple sugar farmer couldn’t be here at the last minute,” said Rep. Annie Kuster (D-N.H.) to Whitehouse, with genuine regret. Over the last several months, Whitehouse has been touring different states, gathering information about the risks that climate change poses to each state’s economy.

It’s a practice that has led some to speculate that Whitehouse is laying the groundwork for a presidential run in 2016. But he maintains that he’s just out to make sure that climate is a key issue in 2016 and, ideally, get Hillary Clinton elected in the process. So if this is groundwork, it’s pretty small-scale: There are 10 people here, not counting all of the various aides and a few local reporters. It’s like a town hall meeting that just happens to involve a U.S. senator.

Things are, indeed, pretty hairy in the maple syrup industry right now, but that’s not the biggest of New Hampshire’s worries. Tourism is second only to manufacturing in the state’s economy, much of it snow-based. “Clearly,” said Whitehouse to the assembled group, “when people go to New Hampshire they think of skiing. They think of going camping and hiking. They think of maple syrup and they think of moose. They think of the shoreline and they think of lakes. Every single one of them is being affected by what’s happening.” Attempts to mitigate climate change, like the bipartisan energy efficiency bill sponsored by Sen. Jean Shaheen (D-N.H.), are a good start, Whitehouse continued. “But, because of — frankly — a spirit of mischief, a bill that should have passed easily with a huge vote got tied up and politically blocked.”

Whitehouse went on to describe how, in the course of discussing that bill with the caucus, Shaheen gave a presentation on climate change and New Hampshire. “She showed a picture that was so haunting that Chuck Schumer (D-N.Y.) asked her to take it down because it was lunchtime.”

“THAT’S why we didn’t have this discussion during lunchtime!” Kuster said, smugly.

“We think of the importance of a large mammal like moose as far as people wanting to come and see them,” added John Kanter, nongame & endangered wildlife coordinator at the New Hampshire Fish & Game Department. “The effort it took to protect moose to get their populations back — we were just starting to see the fruits of these efforts.” Now, he said, many of the moose they study die of anemia, thanks to the ticks, which thrive in the warmer climate.

“The moose tours know how to find them,” chimed in Kuster.

“The big picture is,” said Cameron Wake, who teaches climatology at the University of New Hampshire, “we’re getting wetter and we’re getting warmer. The most rapid rate of increase we’re seeing is in temperature — two times the global average. That’s linked to snow cover dynamics. You lose a little snow, it exposes bare ground, that warms up. That’s obviously affecting winter recreation.” Local traditions like pond hockey are disappearing, and skiing on actual snow is increasingly something that you have to pay for.

Another issue, adds Kuster, is the rains. They’re heavier than they were, and they’re washing out roads and bridges more regularly than budgeted in the state’s 10-year road plan. When these repairs are made, they are being performed in areas where perhaps they shouldn’t, because all of the site analysis is based on the state’s old weather. “It’s difficult,” Wake said, “for communities to rebuild for a future climate instead of a past one.”

“Well,” said Kuster. “The fact that we can’t say that it’s going to be warmer or colder doesn’t mean that we can’t prepare to adapt to uncertainty.”

“It’s interesting,” said Ben Wilcox of Cranmore Mountain Resort. “I got into the alpine business in the ‘80s, right out of college. Snowmaking originated as a complement. ‘Oh, we’re going to have enough to get by and stay open a few extra days.’ Today, it’s a totally different ball game. All of us who are running resorts today are investing in the infrastructure of snowmaking.” Everyone who didn’t, he added, is out of the skiing business.

Sporting goods suppliers are in the same boat, added Stefan Hausberger, owner of Zimmerman’s Ski & Snowboard. As snow becomes less frequent, skiing becomes a more expensive and elite activity. The store sells more high-end skis than it used to because the kind of people who would buy cheaper equipment — beginners and budget-conscious people — aren’t skiing any more. A lot of the infrastructure around the ski business is eroding too, he added. “People are coming up on a great winter with skis I sold them and they’re driving through these horrible run-down towns. Their perceptions of New Hampshire start to change. They might never come back.”

“You know,” said Whitehouse, “each one of you is a trusted voice in your community.” He stopped and looked at Cathy Corkery, chapter director for the local Sierra Club. “Maybe not Cathy,” he said, jovially. “The Sierra Club has a reputation.”

He continued, and at that point it became clear that this was more than just a fact-finding exercise. Senators have aides to do that sort of thing. This was grassroots organizing, and this was the Come to Jesus moment.

No matter what they had heard about the gridlock in Washington, D.C., Whitehouse said to the group, they were much closer to making progress on the issue of climate change than most people believed. “I see where the public is. I see how increasingly isolated the denier cohort is. And I see how increasingly uncomfortable Republicans who aren’t in the hard denier cohort are with being stuck where they are. I think there’s a pathway to significant reduction in carbon pollution, possibly as soon as next year, if we play our cards right and get lucky.”

All it would take would be breaking the barricade around Congress – which the public has a lot of say in. “America’s like a big pan full of water,” said Whitehouse. “If you tip it a little bit, you can get a big slosh of public opinion. And right now’s the time.”