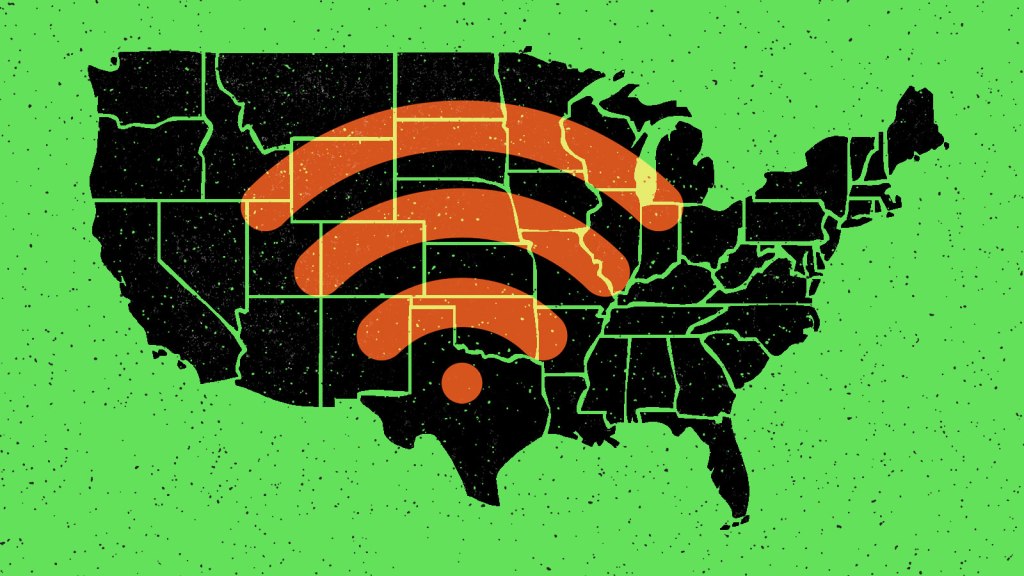 One of the starkest inequalities exposed by the coronavirus pandemic is the difference between the digital haves and have-nots. Those with a fast internet connection are more able to work and learn remotely, stay in touch with loved ones, and access critical services like telemedicine. For the millions of Americans who live in an internet dead zone, fully participating in society in the age of social distancing has become difficult if not impossible.

But if the pandemic has laid bare America’s so-called “digital divide,” climate change will only worsen the inequality that stems from it. As the weather grows more extreme and unpredictable, wealthy urban communities with faster, more reliable internet access will have an easier time responding to and recovering from disasters, while rural and low-income Americans — already especially vulnerable to the impacts of a warming climate — could be left in the dark.

Unless, that is, we can bring everyone’s internet up to speed, which is what Democratic lawmakers on the House Select Committee on the Climate Crisis are now hoping to do.

Buried in a sweeping, 538-page climate change plan the committee released last month is a call to expand and modernize the nation’s telecommunications infrastructure in order to prepare it, and vulnerable communities around the country, for future extreme weather events and climate disruptions. The plan calls for increasing broadband internet access nationwide with the goal of getting everyone connected, updating the country’s 911 emergency call systems, and ensuring cellular communications providers are able to keep their networks up and running amid hurricane force winds and raging wildfires. This plan isn’t the first to point out that America’s internet infrastructure is in dire need of an upgrade, but it is unusual to see lawmakers frame better internet access as an important step toward building climate resilience.

To Jim Kessler, executive vice president for policy at the moderate public policy think tank Third Way, this framing makes perfect sense. “You’ve got to build resilience into communities but also people,” Kessler said. “And you can’t do this without people having broadband and being connected digitally.”

While the internet is often described as a great equalizer, access to the web has never been equal. High-income people have faster internet access than low-income people, urban residents are more connected than rural ones, and whiter counties are more likely to have broadband than counties with more Black and brown residents. And we’re not just talking about a few digital stragglers being left behind: The Federal Communications Commission (FCC) estimates that more than 18 million Americans lack access to fast broadband, which the agency defines as a 25 megabits per second download speed and 3 megabits per second upload speed. Monica Anderson, who studies the digital divide at Pew Research Center, says that many more Americans do have broadband access in their area but don’t subscribe because it’s too expensive. “What we see time and again is the cost is prohibitive,” Anderson said.

A lack of broadband reduces opportunities for people in the best of times, but it can be crippling in wake of a disaster, making it difficult or impossible to apply for aid or access recovery resources. Puerto Ricans experienced this in the aftermath of 2017’s Hurricane Maria, which battered the island’s telecommunications infrastructure and left many residents with terminally slow broadband more than a year after the storm had passed. Three years later, with a global pandemic moving vast swaths of the economy online for the foreseeable future, internet-impoverished communities around the country are feeling a similar strain.

To some extent, mobile networks have helped bridge the broadband gap in recent years. More than 80 percent of Americans now own a smartphone, with similar rates of ownership among Black, white, and Hispanic Americans. Nearly 40 percent of Americans access the internet primarily from a phone. As far as disaster resilience goes, this surge in mobile adoption is good news: Our phones allow us to receive emergency alerts and evacuation orders quickly, and first responders rely on them to coordinate on the fly. Of the 240 million 911 calls made every year, more than 80 percent come from a wireless device, per the FCC.

But in the age of climate change, mobile networks are becoming more vulnerable. The cell towers, cables, and antennas underpinning them weren’t always built to withstand worsening fires and storms, a vulnerability that Verizon, T-Mobile, and AT&T have all acknowledged in recent climate change disclosures filed with the CDP (formerly the Carbon Disclosure Project). And when these networks go down — as nearly 500 cell towers did during California’s Camp and Woolsey fires in 2018, according to the new House climate change plan — it can create huge challenges for emergency response.

“Everything from search-and-rescue efforts to sending out warnings to getting people directions to shelters is facilitated through various telecommunications and internet,” said Samantha Montano, an assistant professor of emergency management at Massachusetts Maritime Academy. “We’re pretty reliant on them.”

Democrats’ new climate plan seeks to address many of the problems created by unequal and unreliable internet access in order to build a more climate-hardy web and society.

To help bring about universal broadband access, the plan recommends boosting investment in FCC programs like the Rural Digital Opportunity Fund, a $20 billion fund earmarked for broadband infrastructure deployments across rural America. It also calls for increased investment in programs like the FCC’s Lifeline, which offers government-subsidized broadband to low-income Americans, and it recommends mandating that internet service providers suspend service shutoffs for 60 days in wake of declared emergencies. Broadband improvements should be prioritized in underserved communities that are “experiencing or are likely to experience disproportionate environmental and climate change impacts,” per the plan.

As far as mobile networks go, House Democrats recommend that Congress authorize states to set disaster resilience requirements for wireless providers as part of their terms of service. They also recommend boosting federal investments in Next Generation 911, a long-running effort to modernize America’s 911 emergency call systems and connect thousands of individually operating systems. Finally, the plan calls for the FCC to work with wireless providers to ensure their networks don’t go offline during disasters for reasons unrelated to equipment failure, citing Verizon’s infamous throttling of data to California firefighters as they were fighting the Mendocino Complex Fire in 2018.

Kessler of Third Way said that Democrats’ climate plan lays out “the right ideas” for bridging the digital divide. “You want to be able to get the technology out there, the infrastructure out there, and you need to make sure people can pay for it,” he said.

The call for hardening our internet infrastructure is especially salient to Paul Barford, a computer scientist at the University of Wisconsin, Madison. In 2018, Barford and two colleagues published a study highlighting the vulnerability of America’s fiber cables to sea level rise, and he’s currently investigating how wildfires threaten mobile networks. In both cases, he says, it’s clear that the telecommunications infrastructure deployed today was designed with historical extreme conditions in mind — and that has to change.

“We’re living in a world of climate change,” he said. “And if the intention is to make this new infrastructure that will serve the population for many years to come, then it is simply not feasible to deploy it without considering the potential effects of climate change, which include, of course, rising seas, severe weather, floods, and wildfires.”

Whether the House climate plan’s recommendations become law remains to be seen. Many of the specific ideas in the plan have already been introduced to Congress in various bills, including the LIFT America Act, which would infuse Next Generation 911 with an extra $12 billion in funding, and the WIRED Act, which would authorize states to regulate wireless companies’ infrastructure.

Perhaps most significantly, House Democrats recently passed an infrastructure bill that would invest $80 billion in broadband deployment around the country overseen by a new Office of Internet Connectivity and Growth. The bill would mandate a minimum speed standard of 100/100 megabits per second for federally funded internet projects, a speed stipulation that can only be met with high-speed fiber optics, says Ernesto Omar Falcon, a senior legal counsel at the Electronic Frontier Foundation, a digital civil liberties nonprofit. Currently, Falcon estimates that about a third of Americans have access to this advanced internet infrastructure, with a larger swath of the country accessing the web via older, slower, DSL copper or cable lines. “It would connect anyone who doesn’t have internet to a 21st century line,” Falcon said. “That’s a huge deal.”

The infrastructure bill seems unlikely to move forward in a Republican-controlled Senate. But the urgency of getting everyone a fast, resilient internet connection isn’t going anywhere. In fact, the idea that internet access is a basic right seems to be gaining traction every day, even making an appearance last week in presumed Democratic presidential candidate Joe Biden’s new infrastructure plan. With the pandemic continuing to transform how we work, live, and interact with one another, and with climate change necessitating even larger transformations in the future, our need to be connected digitally is only becoming greater.

“I think every day the pressure mounts, because the problem is not going away,” Falcon said. “It’s really going to come down to what we want the recovery to look like. And which of the problems COVID-19 has presented us with do we want to solve.”