Tom Steyer is not running for Senate, and that’s a good thing 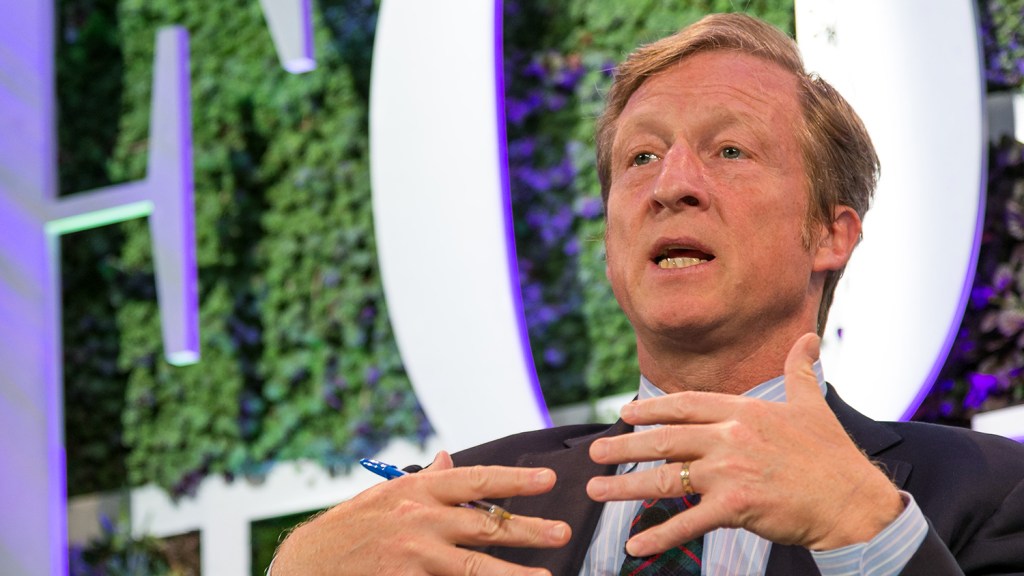 Tom Steyer is not running for Senate, and that’s a good thing

Tom Steyer, billionaire anti-climate change activist, announced Thursday afternoon that he will not be running for the open Senate seat in California in 2016. The seat is currently held by Barbara Boxer (D), leading climate hawk and ranking Democrat on the Environment and Public Works Committee. Steyer — who retired from his hedge fund, divested his personal holdings of fossil fuels, and launched the NextGen Climate Action super PAC to take out climate-denying politicians — publicly mulled jumping into the Democratic primary. Instead he has left the field to frontrunner California Attorney General Kamala Harris and her likely challenger, former Los Angeles Mayor Antonio Villaraigosa.

You might expect your climate change correspondent to be disappointed. But this is actually a cause for celebration. In the Senate, Steyer would have been one of 100 members and without any seniority. He would have been limited — by personal political considerations, if not legal ones — from making full-throttled attacks on Republican Senate candidates who block climate action. His NextGen Climate apparatus, which includes advocacy groups as well as the PAC, would have been effectively neutered.

Instead, Steyer will be free to invest in combatting fossil fuel-backed misinformation campaigns and electing more climate hawks. His money and leadership will be needed, given the huge amounts that self-interested pollutocrats like the Koch brothers will be spending on the other side. The most important race in 2016 will be the presidential campaign. If President Obama is not succeeded by a climate hawk, all the progress of his regulatory proposals could be halted. Steyer alluded to that in his statement Thursday when he noted “the imperative of electing a Democratic president.”

California progressive and climate activists are inclined to agree. Prior to Steyer’s announcement, some of them expressed trepidation about his potential campaign. He would be a super-rich white man running against a woman of African-American and South Asian heritage. The Senate currently has plenty of rich white men and only one woman of color. Harris has the support of the California and national Democratic establishment, and considerably more political experience than Steyer. Steyer would likely have lost, blown tens of millions of dollars that could have been better spent elsewhere, and kneecapped NextGen Climate.

Now the big question is whether Steyer will make a future bid for another political office — the California governorship will be up for grabs in 2018, and the state’s other Senate seat might be as well.

“Steyer’s/NextGen’s work has opened up a huge space for Democratic politicians to take strong positions on climate, and continuing on that path is a wise choice,” says R.L. Miller, cofounder of Climate Hawks Vote, a California-based national super PAC that endorses congressional candidates with a record of climate leadership. “We hope that the national media won’t automatically assume that everything he does is a setup for a 2018 run for governor, when Jerry Brown’s term expires, or California’s other Senate seat if Dianne Feinstein decides to retire. Such a drumbeat of speculation would diminish NextGen’s advocacy for strong climate candidates across the country.”

Miller is confident that Harris would be a climate hawk in the Senate based on her record as attorney general. “I’m favorably impressed with Kamala Harris,” says Miller. “Her office has intervened, on the pro-climate side, in a San Diego County transit plan that would encourage cars over more climate-friendly transit alternatives. She’s been highly critical of a Chevron refinery expansion plan.”

This doesn’t mean Climate Hawks Vote is endorsing Harris. When the field has taken shape, the PAC will examine all the candidates. Villaraigosa also took climate-friendly positions as mayor of Los Angeles, especially by working to expand the city’s historically anemic mass transit system. And other candidates may yet get in the race.

But, as Steyer realized, the battlefield will be much larger than any one Senate race. And when it comes to electing climate hawks, California’s seat will be the least of his worries.