Zombie pipelines, EPA under attack, and that's just Week One 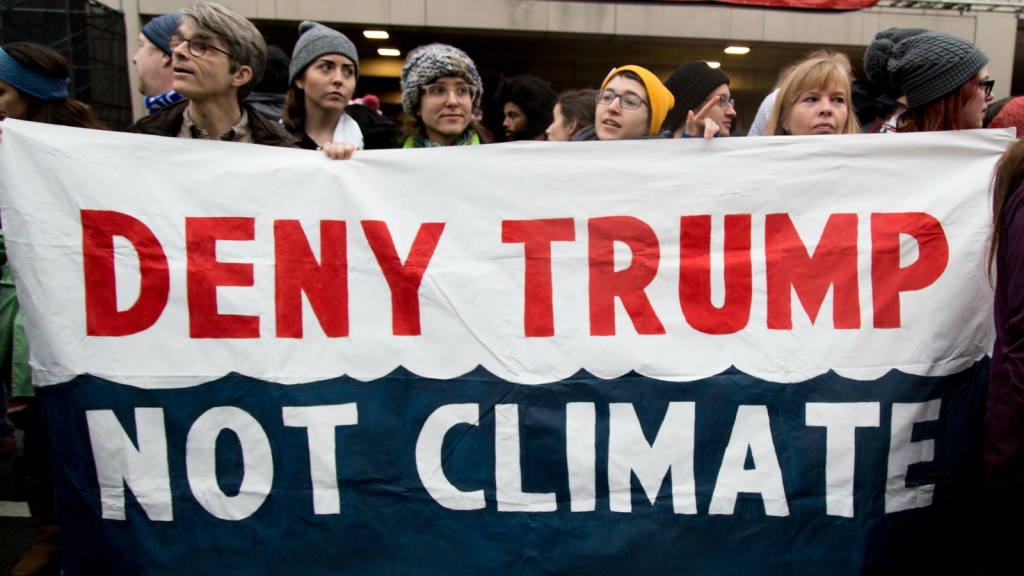 Zombie pipelines, EPA under attack, and that’s just Week One

Did someone say carnage? The environment — and government agencies charged with protecting it — saw a lot of that this past week. Still, some headlines mattered more than others. Here’s a rundown of President Trump’s first week in the White House and which actions should worry you the most.

Rise of the zombies:
Pipelines resurrected

What happened? On Tuesday, Trump revived both the Keystone XL and Dakota Access pipelines. He invited TransCanada to reapply for a border-crossing permit for Keystone — which the company promptly did just two days later — and told the State Department to make a decision on that application within 60 days. (KXL, in case you’ve forgotten, would transport dirty Canadian tar-sands oil across the American farm belt and one of its most important drinking water sources and encourage the further development of one of the most climate-threatening fuel sources on the planet. President Obama rejected it as “not in the national interest.” That’s an understatement.)

Trump also directed the Army Corps of Engineers to hurry up with review and approval of a permit for the disputed segment of the Dakota Access Pipeline, which the Standing Rock Sioux say threatens their sacred land and water, and to skip additional environmental review if possible. Trump also signed an executive order that would speed up environmental reviews and approvals for other “high-priority infrastructure,” which could include still more pipelines and fossil fuel projects.

How much should you worry? Some. There are still procedural, legal, and financial hurdles in the way of the KXL and DAPL pipelines, but both pipelines are now a lot closer to getting built than they were a week ago. At the same time, environmentalists and Native American activists are riled up and ready to use every possible tool to try to stop the pipelines, from lawsuits to direct action. Obama’s rejection of KXL and reconsideration of DAPL were two of the highest-profile victories for environmental justice and the “keep it in the ground” movement under the previous administration, and activists aren’t going to give those wins up without a monumental fight.

What happened? The Trump team is hammering particularly hard on the Environmental Protection Agency. At the start of the week, the administration froze EPA grants and contracts, which fund everything from cleanup of toxic sites to testing of air quality, though most grants and contracts have now been unfrozen. The admin is vetting all external meetings and presentations that employees are planning to give over the next three weeks, reviewing studies and data that have already been published by EPA scientists, and has put a “temporary hold” on the release of new scientific information.

Myron Ebell, who until recently led Trump’s EPA transition team, said on Thursday that his “aspirational” goal would be to see the agency’s staff slashed by two-thirds, from about 15,000 people down to 5,000, and that Trump could be expected to cut about $1 billion from the agency’s annual budget of roughly $8 billion. Ebell is not part of the administration, but his views sound like what you’d expect to hear from Scott Pruitt, Trump’s nominee to head EPA.

How much should you worry? A lot. The EPA is responsible for implementing federal laws that protect air and water, and determining what the latest science tells us about protecting human health. The agency is involved in everything from helping to fix the Flint water crisis to overseeing cleanup of toxic sites. Weakening the EPA, let alone eviscerating it, would directly and negatively affect Americans’ health.

What happened? On Trump’s first day as president, his administration deleted information on climate change from the White House website and replaced it with a page on Trump’s “America First Energy Plan.” Most climate change mentions were deleted from the State Department’s website, as well. On Wednesday, Reuters reported that the Trump team had ordered the EPA to erase the climate change section of its website, but after some bad press, the team backed off, so as of this writing, the section is still up. An EPA webpage on common questions about climate change is gone, though.

How much should you worry? Not that much. “The full contents of the Obama administration’s White House and State Department websites, including working links to climate change reports, have been archived and are readily available to the public,” the New York Times reports, and the EPA’s climate section has been preserved too. But these kinds of moves do make it a little tougher for the public to get accurate information on climate change. More troublingly, they’re an ominous sign of what’s to come. As Trump starts wiping out climate-protecting programs and regulations, that will be the real cause for worry.

What happened? Hours after the inauguration, Trump ordered the National Park Service to stop using social media because his pride was wounded by an NPS tweet comparing the size of his inauguration crowd to Obama’s in 2008. Over the next few days, gag orders also went out to EPA, the Department of Energy’s renewables team, and the departments of the Interior, Agriculture, and Health and Human Services, telling them to stop communicating with the public via social media, press releases, and/or new website content.

The Twitter restrictions backfired: Former and current National Park Service employees tweeted out climate messages from various official accounts as well as new “alt” accounts, which just served to highlight how uncomfortable the Trump team is with scientific statements about climate change.

How much should you worry? Not that much. The Obama administration put similar restrictions in place right after he took office in 2009, putting communications on hold until they got their people in place at departments and agencies. But once the tweets and press releases do start flowing from the Trump administration, you can expect them to be devoid of #ClimateFacts.

What happened? On Trump’s first day as president, his administration put a freeze on new or pending regulations. This included 30 EPA regulations; four Energy Department rules that would require portable air conditioners, walk-in freezers, commercial boilers, and other equipment to be more energy efficient; and regulations from other departments governing everything from hazardous waste transportation to endangered species protections.

How much should you worry? Not that much. Obama also froze new and pending regs after he took office in 2009. A number of these rules could still go through; industry supports some of the efficiency ones, for example. But this is just one step in what will be a long process of the Trump team halting and dumping rules it doesn’t like. The EPA will be a particular target. On Tuesday, Trump said environmental regulations are “out of control,” and on Thursday, Ebell said the administration might revisit decades’ worth of EPA rules.

The writing’s on the wall:
Blocking the border

What happened? On Wednesday, Trump issued an executive order kicking off the planning process for building his much-hyped wall along the U.S.-Mexico border. This is obviously an attack on immigrants. Less obviously, it’s an attack on our climate, threatened species, and fragile ecosystems. Building a 1,300-mile-long, 40-foot-tall wall would require massive amounts of concrete, which would result in a lot of additional greenhouse gas pollution, E&E News points out. And it would exacerbate the problems caused by existing border fences, like blocking the migration of animals such as wolves and jaguars, and triggering flooding.

In building a wall, Trump and his allies would also be ignoring one of the root causes of migration: climate change. We need to be helping people affected by global warming, not creating new ways to shut them out — especially since Americans caused such a big part of the climate problem in the first place.

How much should you worry? Some. There are a lot of stumbling blocks to be overcome before such a huge project could get rolling, but if it does, rare species and their habitats might be permanently devastated, and migrants trying to escape climate chaos and other hardships would suffer.