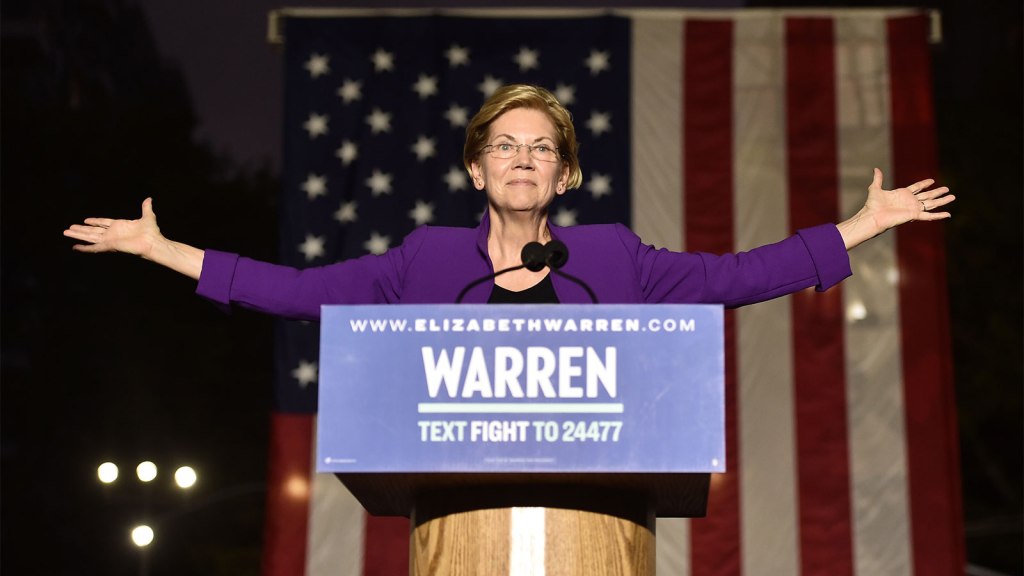 Undeterred by the broken record of “how are you going to pay for that,” Elizabeth Warren has released yet another climate plan, and this one ups the candidate’s ante to $10 trillion for a clean economy. That includes both public and private investments. Warren’s latest is called her “Plan to Create 10.6 Million Green Jobs,” and it arrives on the heels of her Blue New Deal to protect the oceans from climate change, which was released earlier this month.

With six weeks to go before the Iowa caucuses, Warren is working hard to convince the public that climate change is a top priority for her. Earlier this week, the senator from Massachusetts penned an opinion piece for BuzzFeed News detailing how she would kickstart a Green New Deal in the first 100 days of her presidency. And she surely earned some points among climate hawks with this endorsement from Rhiana Gunn-Wright, one of the architects of Representative Alexandria Ocasio-Cortez and Senator Ed Markey’s Green New Deal resolution:

I am proud to have @RGunns, one of the architects of the #GreenNewDeal, in this fight. Together, we can root out the corruption in Washington that's holding up progress and fight to defeat the climate crisis. pic.twitter.com/WnahVZtR8P

Warren’s new proposal is more of an amalgamation of several plans she’s already released. This time, Warren solicited an independent review of her policies from the left-wing think tank Data for Progress, which recently worked with Bernie Sanders and Ocasio-Cortez on the Green New Deal for Public Housing. The nonprofit’s analysis found that her plans would create 5.4 million jobs in 10 years as a result of federal investment in “new and existing clean industries and implementation of green technologies.” That number jumps to 10.6 million when taking into account Warren’s plan to revitalize U.S. manufacturing of green technology. Her plan to fund all this job growth relies on the creation of a Green Bank that will “mobilize $1 trillion climate and green infrastructure investments across the country over 30 years.”

Warren has long been a supporter of the Green New Deal, and the strategy she outlines in this latest release solidifies her commitment to the New Deal legacy. She praises Franklin Delano Roosevelt and John F. Kennedy for believing in American ingenuity to solve “seemingly impossible challenges,” like defeating the Nazis and putting a man on the moon. She hits every note in the “Green New Deal” canon: mass job creation through decarbonization and investments in infrastructure, fixing public transportation, social and environmental justice, and a transition plan for fossil fuel workers.

For Americans, this means new job retraining programs, investments in vocational schools, and building a pipeline from those schools into the green workforce. Warren says she’ll increase the $200 million the U.S. currently spends annually on apprenticeships to $20 billion over 10 years. Her proposal also addresses one of the gaps in the argument for a “just transition”— the absence of unions in the renewable energy space. As it stands, it’s not surprising that fossil fuel workers with good, reliable pay and healthcare are not leaping at the opportunity to move to lower-wage jobs installing solar panels. Warren vows to work with unions to fight for better wages and benefits in these jobs. She also says she’ll create new rules ensuring that companies with federal contracts count women and people of color among their staff.

Warren’s Green New Deal is ambitious, but not as ambitious as the one proposed by rival Sanders, who aims to create 20 million jobs at a cost of $16 trillion. Warren released her proposal the morning after the sixth Democratic primary debate, where candidates were thrown more substantial questions about climate change and given more time to discuss them than in previous debates. By this point it’s clear that the frontrunners are all on the same page about one thing: the warming planet may be scary, but fighting for the future offers the chance to fix a lot of other shitty things going on right now. Now one of the candidates just has to make it to the White House.