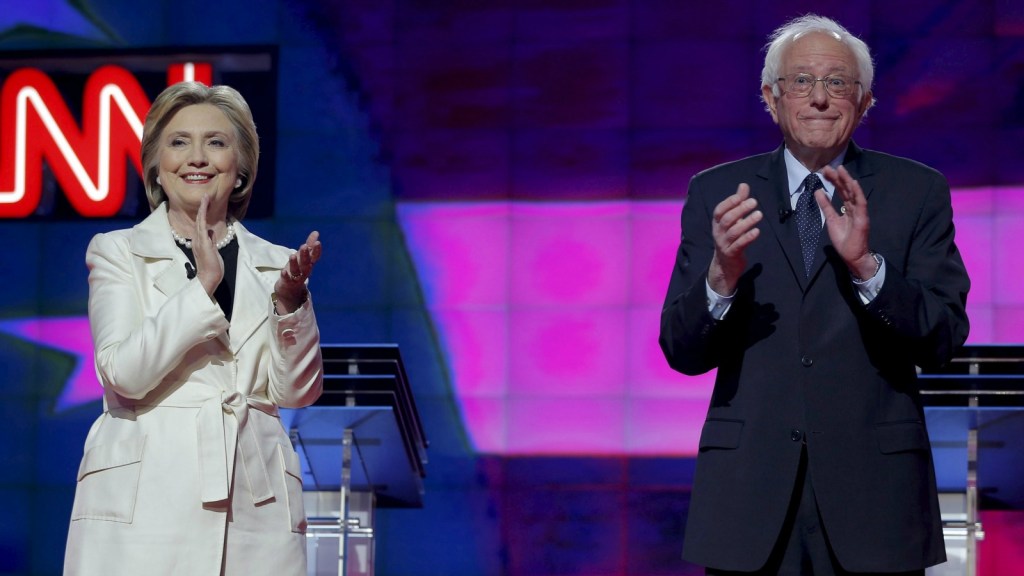 What do Gristers do after the two remaining Democratic candidates for president spend a substantial chunk of time debating climate and energy issues? Pour a drink and obsess over the whole thing in an online chat, of course. The following transcript has been lightly edited.

Scott Dodd (executive editor): Wow, nine Democratic debates in and we got a whole — what, 15 minutes devoted to the most important issues affecting the future of human civilization? Was anybody surprised we got even that much?

Ben Adler (politics reporter): I was optimistic that they would ask some questions about climate change because it’s been a hot issue recently.

Ben: Then I got pessimistic as they asked about the most unimportant campaign trivia during the first segment. So I was sort of half surprised when it finally happened.

Rebecca Leber (news editor): The funny thing is it didn’t even kick off with a particularly insightful question. Just Wolf Blitzer asking Clinton about Sanders’ attacks, and then “What are his lies?” But it got better. I felt like the moderators just let the candidates go at each other, only pushing back occasionally. By far the best moderation on climate we’ve seen in any of the debates.

Scott: Yeah, it often seems like the moderators focus on things only the political press really cares about, as opposed to the real issues. But I guess that’s a good question: We in the Grist offices were glued to our screens for the climate and energy stuff, but do voters care?

Clayton Aldern (senior fellow): I think this is something that Ben has touched on a good amount — that climate tends to rank reasonably low on the priority list across both parties, albeit more highly on the Democratic side of things. My understanding is that climate tends to be one of the issues that people love to harp on, but not one with which they vote.

Ben: Most voters form an opinion of which candidate they prefer based on broader themes and find proof in the issues to support them. It’s not what you say about the issues, it’s what the issues say about you. And climate doesn’t rank in the first tier.

Scott: Sanders compared them to 9/11 and WWII in terms of importance.

Ben: I appreciated that analogy. In general, it feels like your average liberal, and increasingly your average moderate and sometimes even conservative, realizes that climate change is a terrifying long-term threat. They support a transition to clean energy, but have no sense of immediate urgency. Sanders is trying to convey the urgency with which it should be treated.

Clayton: I think this is the first time we’ve seen anyone deploy that kind of rhetoric — the “enemy” rhetoric — for the security threat argument.

Rebecca: There are so many ways climate change can fit into the broader discussion, and not as a niche issue the political press usually treats it as. Sanders’ comments on combating an “enemy” got at that larger framework we’re usually missing.

Scott: So for those of us who do really care about climate, did we hear anything new last night from the candidates?

Rebecca: We got a sense of two different philosophies: Clinton pushing what Obama has already accomplished and how to expand on that, and Sanders wanting to go much further, condemning the status quo, by banning fracking and whatnot. I don’t think voters have heard much that would give them a sense of the candidates’ two visions before last night. Probably because previous debates mostly ignored it.

Scott: Ben, going back to Wolf’s first question to Clinton about her campaign donations from fossil fuel interests, which you wrote about this past week: Is that the kind of trivial stuff that just gets the candidates yelling at each other, or does it matter?

Ben: I think that to a certain segment of Sanders supporters, the fossil fuel dollars become one of those points that they glom onto because it reinforces their sense of Clinton as in hock to corporate interests. But I doubt any voters who were undecided between the candidates would choose Sanders when they find out Clinton has a handful of lobbyist donors who have fossil fuel corporations as clients. If you weren’t already a Sanders voter, why would that push you over? And that connects to my critique of that whole issue, which is that an enviro voter deciding between Clinton and Sanders should — and probably does — care more about their policy stances than their donors.

Scott: So then Rebecca, to your point about different philosophies, how much daylight is there really between Clinton and Sanders on climate and energy issues — and where are those major differences, if any?

Rebecca: Well, there were some surprising and not surprising differences highlighted yesterday — for one, Clinton repeating that natural gas is a “bridge fuel” and we “want to cross that bridge as quickly as possible.” Sanders certainly doesn’t agree it’s a bridge fuel. Also, Clinton not quite answering whether she supports a carbon tax and Sanders not quite answering how to make up for nuclear energy (which he wants to phase out) were easy-to-miss but important nuances. But on the basic point — do they think climate change is a problem that needs solving? — they agree.

Clayton: Clinton’s comment about natural gas as a bridge fuel — and bear in mind, she largely made the argument with respect to Europe, by which I assume she’s referring to Eastern Europe — is remarkably similar to the World Bank’s position on gas. If you’re looking for anything that epitomizes the “establishment” (read: incrementalist) approach to energy policy, it’s probably that.

Rebecca: True, Sanders and Clinton have different audiences in mind.

Ben: Yeah, Clinton is concerned about the general election and swing voters, Sanders isn’t. My strong suspicion is that Clinton doesn’t want to back a carbon tax because she fears being attacked for it in the fall. “Clinton would raise your electricity bills. You’d pay more to fill up your car,” etc.

Rebecca: Yes. I was confused at first (“baffled” was the word I used on Twitter) why Clinton didn’t come out and say she supports a carbon tax. A bunch of journalists on Twitter had a lot of smart things to say, basically that she has her eye on the general and doesn’t want to feature in an attack ad saying the word “tax” on endless loop. I think the same audiences apply for fracking — Clinton is thinking about the general; Sanders is thinking about his base.

Ben: I asked her campaign chair, John Podesta, about this in the spin room after the debate, and Jen Palmieri, a Clinton spokeswoman. They both said, essentially, that Clinton doesn’t support a carbon tax because she has other means of getting us to, in Podesta’s words, “deep decarbonization.” So they deny that it’s a political calculation, but I think it is — why open herself up to attacks with a policy proposal that won’t pass anyway?

Clayton: Clinton is all about the realm of political possibility — what can get through Congress, what offers the path of least resistance, etc. The bridge fuel argument says, “Let’s at least do better than coal.” Sanders doesn’t buy that argument, and says we need drastic change if we actually want to solve the climate crisis. (This is, of course, largely representative of their approaches to their campaigns more generally.)

Ben: Yeah, Sanders doesn’t care about any of that. He just endorses the optimal policy because he’s got to win a bunch more Dems to win the nomination, and that’s how he could do it.

Scott: So that seems to bring us to the place where Sanders struggled the most on energy last night, when the moderators challenged him on his all-out opposition to fracking, and whether that means we’d just have to go back to relying more on coal and nuclear. How do you think he came out there?

Rebecca: Oof, not good, though I don’t think it will matter to his supporters. He basically didn’t answer, only pointed to his 10 million rooftop solar initiative. This was as much a non-answer as Clinton’s was on a carbon tax.

Clayton: I mean, we have him saying, “We have got to lead the world in transforming our energy system, not tomorrow, but yesterday.” He’s right about that, but he also needs to deliver concrete policy solutions.

Scott: It was interesting how much Clinton tied herself to the Obama climate legacy — a legacy that, just a few years ago, many enviros considered a mixed bag at best. Is that a sign of how far the president has come on climate?

Rebecca: Well, this has been a broader strategy for her. She’s been tying herself to Obama’s legacy left and right. So I think it’s because he’s just very popular among Democrats, at about 87 percent approval rating. But maybe how far he’s come on climate is one of the reasons he’s so popular among Dems.

Clayton: I dunno. Clinton name-dropped Obama a lot, but she also softened the language she used on that front a bit. Compare last night’s “I worked with President Obama to bring China and India to the table for the very first time” to October’s “literally hunting for the Chinese.”

Ben: I agree with Rebecca. The other thing is that Clinton is trying to hint at is political feasibility. She’s trying to point out to Dem voters that they aren’t the whole electorate, that Republicans are suing to stop Obama’s Clean Power Plan, for instance, and that just protecting Obama’s progress will be enough of a challenge, and that more aggressive policies might run into legal challenges, or cost Democrats elections in swing states. But she doesn’t spell all that out, and I’m not sure why. It makes her sound timid instead of pragmatic.

Scott: This takes us beyond last night’s debate and looking ahead toward the general election: Do you think we’ve just hit the high-water mark for discussion of these issues?

Clayton: Well the nominee sure as hell isn’t going to have a more substantive conversation about energy policy with Trump.

Rebecca: I think this is the last engaging debate on climate we’ll see. Once we get to the general, whoever the Democratic nominee is will just have to highlight climate denial, not get into policy details of the what and how.

Rebecca: If you care about this issue, you get used to it.

Scott: So let’s try to end on a high note: Anything last night that made you LOL — like you couldn’t believe that was coming out of a candidate’s mouth?

Ben: Nothing funny, but I was excited to see Sanders ask Clinton directly about a carbon tax. I wish debates were more direct interaction between candidates rather than each offering canned answers filled with irrelevant talking points to the moderators. They’re usually more like simultaneous interviews than actual debates.

Rebecca: Clinton burned Sanders pretty hard: “I don’t take a back seat to your legislation that you’ve introduced that you haven’t been able to get passed.”

Clayton: Re: Sanders not releasing his tax returns, she also said, “Well, you know, there are a lot of copy machines around.” Which was worth a small handful of lulz.

Scott: I was convinced Wolf was going to end the climate conversation after the first question, just like the moderators have in so many previous debates this election cycle. So the fact that it went on as long as it did and we got so much from the candidates on the issue made me smile.

Ben: I loved how rowdy the audience was. That was NY representing.