Who's your climate champion? Sanders and Biden vied for the title at Sunday's debate 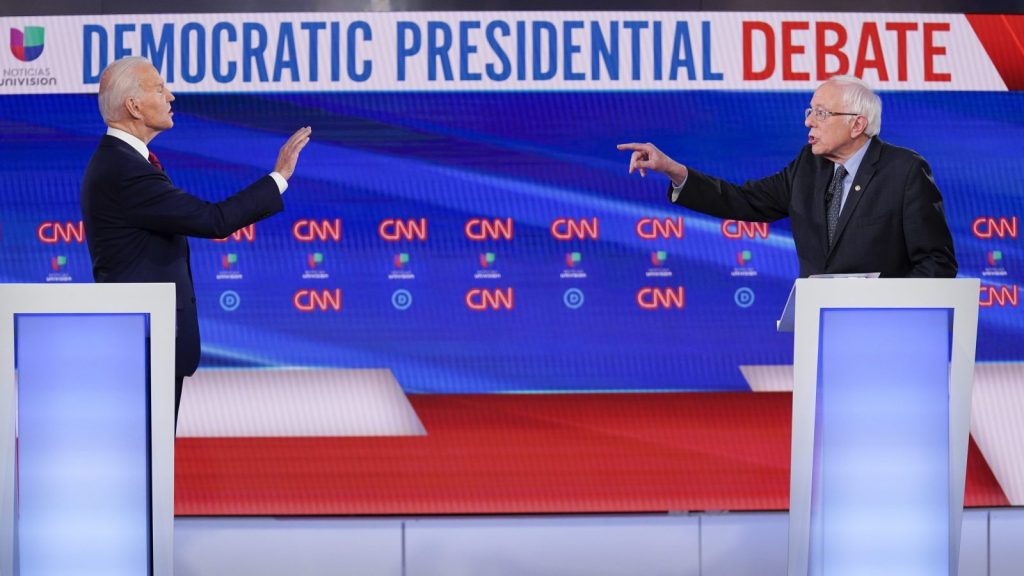 Who’s your climate champion? Sanders and Biden vied for the title at Sunday’s debate

It only took 10 debates, a worldwide pandemic, and the winnowing of the Democratic field down to two men in their late 70s — but on Sunday night, for about 12 minutes, the American public finally got to hear a substantive debate about climate change.

The coronavirus outbreak forced Bernie Sanders and Joe Biden to debate in a strange, glossy CNN studio in Washington, D.C., with their podiums placed a World Health Organization-approved 6 feet apart and no audience but the moderators. Although it was weird seeing the two candidates in what was essentially a television-ready bunker, it was even weirder watching them trying to one-up each other over who would be the better climate champion.

Sanders has long claimed that he has the most ambitious agenda to tackle climate change of any candidate — a $16.3 trillion plan, endorsed by activist groups like the Sunrise Movement, that aims to generate all electricity from renewables by 2030. He wants to ban all fracking and treat fossil-fuel companies like Big Tobacco and “hold them accountable.” Biden, meanwhile, has a more $1.7 trillion plan that involves installing 500,000 electric vehicle charging stations across the country (one of his favorite debate talking points). He wants to invest heavily in research and development into green technology and ban fracking on federal lands. Critics deride Sanders’ pitch as unrealistic and Biden’s as too little to meet the challenge.

During the debate, Biden claimed that despite the difference in dollars, his plan was ambitious enough to tackle the crisis. And in what appeared to be a shift, he also said he would ban all new fracking. “I would immediately rejoin the Paris climate accord, which I helped put together,” he said, vowing to financially sanction countries that didn’t live up to their commitments under the agreement.

Sanders punched back, arguing that Biden’s plan was “nowhere near enough.” “It’s not a question of re-entering the Paris accord. That’s fine. Who cares. It’s not a big deal,” he said, pointing to the need for more sweeping measures.

With only two Democratic candidates left on the stage, and two major catastrophes — coronavirus and climate change — looming, Sanders and Biden seemed like they were trying to one-up each other, hashing out both the details of their plans and seemingly the larger political ethos of their supporters: Sanders the challenger of the status quo, and Biden the advocate of steady progress.

The coronavirus outbreak has provided a rare opportunity to see how both men would deal with the struggles of governing in the midst of a crisis. “We started this debate talking about a warlike situation in terms of the coronavirus,” Sanders said. “We have to act dramatically, boldly, if we’re going to save lives in this country and around the world. I look at climate change in the exact same way.”