Why are Democrats so bad at talking about climate change? 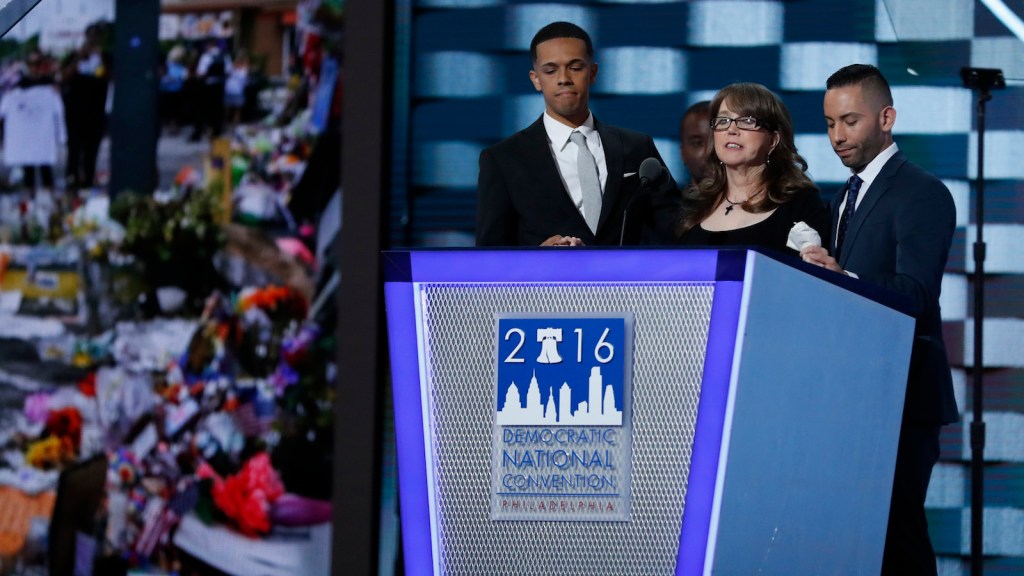 Christine Leinonen, whose son was killed in the Pulse attack in Orlando, spoke at the Democratic National Convention in Philadelphia. REUTERS/Mark Kauzlarich
Politics

Why are Democrats so bad at talking about climate change?

PHILADELPHIA — It was a jarring transition. At the Democratic National Convention last Wednesday, a video by James Cameron depicted the impacts of climate change against a dramatic score — global warming as disaster movie, essentially. Then California Gov. Jerry Brown took the stage and said climate change “affects the entire earth and all living things. It’s slow. It’s relentless.” But even as they tried to emphasize the importance of climate change, speakers struggled to make it resonate.

The evening became much more powerful when it turned to an emotional string of speeches about gun violence. Christine Leinonen, the mother of an Orlando nightclub shooting victim, spoke, as did Erica Smegielski, the daughter of a Sandy Hook victim, and two survivors of the Charleston church shooting, Felicia Sanders and Polly Sheppard. Sen. Chris Murphy of Connecticut, who’s advocated for gun control legislation since the Sandy Hook shooting, also gave a passionate speech, as well as former congresswoman Gabrielle Giffords, who is still recovering from a 2011 shooting. Each had a story to tell of how gun violence has hurt them and loved ones. And it wasn’t the only night Democrats zeroed in on gun control, highlighting personal stories to show why many Americans have had enough of lax policies.

I couldn’t help but wonder: Where are the personal, powerful stories about climate change?

Though the party has supposedly put climate change front and center, Democratic politicians still talk about it as a far-off problem that will affect future generations. Even Bernie Sanders, who gets a lot of credit for pushing the issue onto the national stage, said in his convention speech that we must address climate change so we can “leave this world in a way that is healthy and habitable for our kids and future generations.” Or Democrats just affirm their belief in climate science, as Hillary Clinton did in her speech, and then they move on. These dry nods to the future and to science paled in comparison to the personal stories recounted about other issues, from gun violence to Black Lives Matter to the sacrifices of a Muslim soldier’s family.

But people are suffering from extreme climate impacts today, too, and they would make much better spokespeople for the problem than politicians and movie directors.

Five thousand California residents, many of them Latino, had to live without any running water at least part of last year because of the state’s prolonged drought. Alaskan Native communities are losing their land to rising sea levels and erosion and are being forced to relocate. Residents of Isle de Jean Charles in southeastern Louisiana are considered by some to be the first officially recognized “climate refugees” in the U.S. because they will receive federal grants to help them move away from their flood-ravaged community. Many people have lost their homes to increasingly intense wildfires, and lost loved ones to flash floods.

There are a lot of reasons why it is difficult to find people to tell stories about how climate change is negatively affecting their lives. For one, weather has a complicated relationship to climate change. Your average American might not understand the connection between these disasters and greenhouse gas emissions, even though scientists agree that as global temperatures go up, weather will get more extreme. Connecting personal climate stories to politics can be hard, too: It’s not like electing another Democrat would make any of these problems disappear.

All of this helps to explain why it’s so difficult to communicate with voters and the public about climate change. Climate journalism has the same problem of focusing too little on people’s stories, which are going to become much more common over the next few decades. But we should try harder to tell them now in order to prevent a future where they become routine.