Now that Congress is back in session and our newly elected and re-elected legislators are all geared up and ready to wreak havoc on this little planet we call home, I’ve been thinking about how we got to this point. Wild speculation here, but I assume that the majority of Americans would prefer to breathe clean air and drink clean water and not lose their homes to rising sea levels, and yet, we, as a people, elected a Congress chock full of members who straight up do not believe that climate change exists, despite, you know, science.

So why is this? Who can we blame for the anti-science, anti-reason, anti-climate pols steering this ship? I nominate Andy.*

The day after this last election, I was Gchatting with a friend of mine when I happened to see a photo her boyfriend Andy had posted on Instagram. It was a picture of their Corgi with a sticker on her head — one of those “I Voted” stickers, but instead of “I Voted,” it said “I Farted” (which, in Bowser’s case, was probably true). But this was no mere #dogsofinstagram for the likes: It was a political statement. Turns out, my friend’s boyfriend, much like the dog, doesn’t vote.

I was livid. Irrationally, loudly livid. I’d been at work until late the night before covering the election for the public radio station where I worked at the time and I was physically tired but also just tired. Working in public radio means listening to NPR for 40 or more hours a week, and the constant stream of bad news was doing something to me. If it wasn’t ISIS, it was Ebola, and if it wasn’t Ebola, it was climate change, and if it wasn’t climate change, it was something just as terrifying that I was equally powerless to prevent.

Here we were, the world collapsing around us, and this guy didn’t care enough about the future to cast a ballot. I snapped.

WHAT, I shouted in all caps. You should leave him, and signed out of Gchat in a huff.

Later, still seething from high atop my soapbox, I posted the following on Facebook: 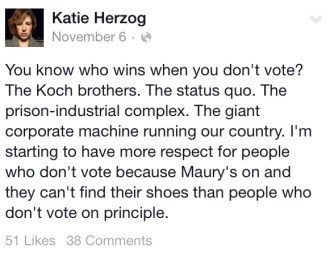 Thirty-eight comments later, my status update devolved into a fight about anarchy versus liberalism and people I’ve never met were calling each other racist. It was entirely predictable, I knew what was going happen, and I did it anyway. But I was truly angry that the voter turnout was so incredibly low, especially in my home state of North Carolina, where our newly minted Sen. Thom Tillis (a pro-coal, pro-fracking tool of big business), was the deciding factor in the Republican majority we just welcomed to Congress.

I was also curious: Why don’t people vote? Not people who don’t give a fuck, but people who really do give a fuck? What could possibly keep them from participating in this tiny civic act? The stickers aren’t that ugly.

To find out, I turned to the closest non-voter in my life, but unfortunately she isn’t speaking to me right now, possibly because I asked if her ACAB tattoo means All Cats Are Beautiful. So I turned to the internet, and found a different non-voter willing to explain his decision  — Davi Barker, writer, activist, and editor of the Daily Anarchist.

Davi wrote me a long email about his path to non-voting. (You can read the full text here.) I’d heard most of his arguments before: One vote doesn’t make a difference, voting is choosing the lesser of two evils, politicians are thieves and liars (I agree with him on this one), etc. But there was one argument I was unfamiliar with:

Behind most votes there is a gun. All laws are backed by guns, in that if you don’t comply with them they’ll send officers with guns out to enforce them, and if you don’t cooperate with those officers you’re going to have a bad day. For example, a vote to ban marijuana points a gun at pot smokers, sellers and growers. These are victimless crimes, and I don’t support violence against nonviolent drug offenders. But to vote to legalize marijuana often involves passing regulations or taxes that are also backed by violence. Maybe you want a community playground. Are you willing to force those neighbors who don’t want it to pay for it against their will? Maybe you want to ban gambling in your community. Do poker players really deserve to be threatened with fines, or arrests, or ultimately physical violence if they don’t cooperate? It’s seldom that I see anything proposed in political platforms that aren’t backed by violence, or at least the threat of violence, if you scratch just below the surface.

This particular argument struck me, not because I agree with it (I don’t — it seems like laws are enforced more by threat of fines or imprisonment than the threat of violence … unless, of course, you are a black man in America), but because it goes against my own perception of anarchists as a group inclined to, well, kind of enjoy violence, or, if not enjoy violence, at least view it as an effective means of dissent. It’s refreshing to hear an anarchist who doesn’t sound like he pulls out the black hood and the Guy Fawkes mask just because he likes to fuck shit up.

That said, I still disagree with him. While Davi’s statement was carefully considered and it’s clear that the system is flawed, I’m unconvinced there’s any justification for not voting, especially when a GOP-controlled Congress may be such an unmitigated, unfixable disaster for the climate, and frankly, I hope you’re not convinced either. Yes, the system is flawed, but maybe it would be less so if everyone who cares about the Earth and its residents cast a fucking ballot.

After many conversations with non-voters, both online and in three dimensions, I know the power to change anyone’s mind is beyond me — but, if I’m really being honest, that probably won’t keep me from trying. Davi might never think his vote matters, but maybe my friend’s boyfriend can be convinced otherwise. There’s always 2016. If we’re lucky.

*Name changed to protect the guilty.