With "moderates" like Jeb Bush and Marco Rubio, who needs the radical right wing? 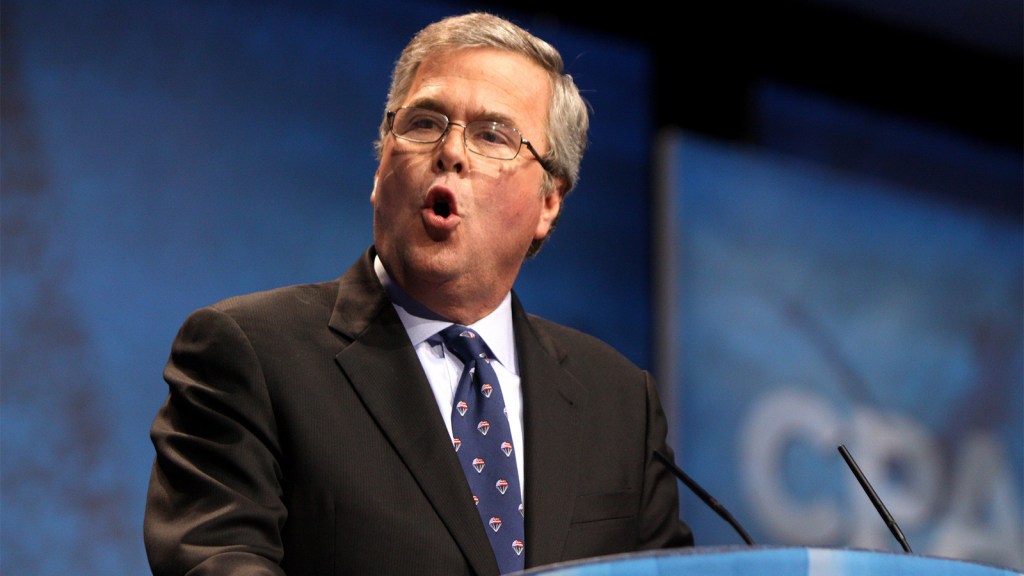 With “moderates” like Jeb Bush and Marco Rubio, who needs the radical right wing?

Strictly on their own terms, these observations may be accurate. But if you think about the candidates’ qualifications — experience, knowledge, and substantive policy proposals — you find that the Republican Sanders isn’t Trump or Carson; it’s Jeb Bush, and Sen. Marco Rubio (R-Fla.), and everyone else in the GOP field who the media mislabels as a mainstream, moderate, or establishment candidate.

That’s because these sober, serious GOP candidates are every bit as right wing as Bernie Sanders is left wing. The Democrats have no counterpart to Trump, Carson, or Carly Fiorina, who lack any relevant experience and routinely makes offensive and demonstrably false assertions. Sanders has been a mayor, congressman, and senator, and he has never said anything as outlandish, bigoted, or ignorant as Carson’s opinion that a Muslim shouldn’t be president or Trump’s labeling of Mexican immigrants as rapists. Nor does Sanders go around lying about simple facts, as Carly Fiorina does about Planned Parenthood.

What supposedly makes Sanders the equivalent of these clowns is his far-left platform. But look at what the supposedly mainstream Republicans actually propose, and you’ll see that they are just as far to the right as Sanders is to the left. As I wrote on Monday, GOP candidates such as Bush and Rubio have radical right-wing energy plans that would give the fossil fuel industry a long list of gifts, with no effort to boost renewables or energy efficiency.

Their tax policies are just as extreme. Bush proposes to flatten the personal income tax code by reducing the number of brackets from seven to three, and to cut rates — especially for those on top. The highest marginal rate would drop from 39.6 percent to 25 percent. He would also slash the corporate income tax rate. Bush’s plan would cost an estimated $3.4 trillion over 10 years, which is slightly more than Bernie Sanders’s proposals other than expanding health insurance.

Bush’s plan may be standard fare for a Republican presidential candidate, but it is unpopular with the general public. As The Washington Post’s Jim Tankersley points out, in 2012, 60 percent of voters said they think tax rates should be going up, not down, on households earning more than $250,000.

Rubio’s plan is even more radical. In March, Rubio co-sponsored a bill with Sen. Mike Lee (R-Utah) that tries to present old-fashioned GOP plutocracy as a kind of centrist reform. Rubio introduced the bill with rhetoric about the squeeze facing middle-class families, but, as the non-partisan Tax Policy Center observes, “the Lee-Rubio plan does little for those struggling households. Instead its biggest beneficiaries would be the highest income taxpayers.” Rubio would cut rates by less than Bush, but he makes up for it by eliminating taxes that fall mostly on the wealthy, such as capital gains. According to the Tax Policy Center, “those in the top 0.1 percent, who make $3.3 million and up, would be in line for an average tax cut of $240,000 — a boost in after-tax income of 3.8 percent.”

Independent analysis suggests Rubio’s plan would cost more than $4 trillion over a decade. Rubio claims his plan would induce so much economic growth that it would pay for itself. Vox’s Ezra Klein calls that “nonsense.” Ronald Reagan and George W. Bush both made the same claim about their tax cut plans; then the economy grew more slowly during their administrations than they’d rosily projected, resulting in massive deficits. The New York Times’ Josh Barro ran Rubio’s claim past “10 public finance economists ranging across the ideological spectrum, all of whom said its estimates of the economic effects of tax cuts were too aggressive.” “A multitrillion-dollar tax cut isn’t going to pay for itself,” writes Klein. “We’ve seen this movie again and again. It’s amazing anyone even bothers playing it anymore.”

Louisiana Gov. Bobby Jindal goes even farther than Rubio and Bush in starving the government and favoring the rich. “[Jindal’s] proposal would completely eliminate corporate taxes,” Think Progress reports. “He would also eliminate the estate tax, something proposed by other candidates, which is only paid by the richest 0.14 percent of Americans. Yet it is still a very progressive and significant source of government revenue, since it would generate $246 billion over the next decade from those who can most afford to pay it.” Jindal’s enthusiasm for tax-cutting doesn’t extend to the poor, though. He is bent out of shape that the lowest earners don’t pay federal income taxes. To make sure they stop freeloading, he would eliminate the deductions they currently benefit from. Jindal’s own estimate, which assumes rapid economic growth would result from his proposal, is that his tax plan would cost $9 trillion over 10 years. Since his plan is new and his standing in the race is marginal, no objective analysis has yet been done, but you can bet that would come in with an even higher bill.

The furthest-right Tea Party favorites among the non-joke candidates, Sens. Ted Cruz (R-Texas) and Rand Paul (R-Ky.), have even more drastically regressive ideas. Cruz proposes a flat tax, which would increase taxes on the poor and reduce them on the rich, starve the government of revenue, and fail at its own goals of increasing economic growth and abolishing the IRS. Paul proposes a flat income tax and replacing the corporate income tax with a tax on business revenue minus allowable expenses, which does not include wages. It would, in other words, depress wages, or raise consumer prices, or some combination thereof. Conservative Bloomberg columnist Ramesh Ponnuru concludes, “What Paul is proposing is a big tax cut for high earners and businesses with almost no direct benefits for most Americans. It’s the latest evidence that a flat tax that cuts most people’s taxes while keeping revenue at a plausible level is just not possible.”

The lie beneath all these plans is that we could actually cut spending enough to balance the budget despite these huge revenue reductions. If you look at the federal budget, though, you will see that almost all of our spending goes to Medicare, Social Security, and defense. The Republican candidates aren’t proposing to cut Medicare or Social Security because those are popular programs and Republican supporters skew old. With the exception of Paul, they don’t propose cutting defense, either.

What they would inevitably do to make the numbers come as close to adding up as possible is cut all domestic discretionary spending. This would, of course, mean cuts for everything from food stamps to education. But it would also mean cuts to spending on environment, transit, and rental housing programs, all of which are needed to develop cleaner, lower-emissions cities. Affordable housing programs, even market-based ones like Section 8 vouchers, and environmental remediation programs for everything from waterways to brownfields would all be on the chopping block. So would renewable energy research and energy efficiency programs. There would be less money available to fill in the shortage of gas tax revenue to support innovating transportation programs like TIGER grants, and you can forget about funding interagency smart growth efforts like the Partnership for Sustainable Communities. The tools of building a low-carbon society would be weakened or eliminated.

It’s clear that these candidates are proposing to shrink government and tilt it toward the wealthy to roughly the same degree that Sanders proposes to expand it and use it to level the playing field. Who, then, would be the GOP’s counterpart to Hillary Clinton? The cautious, pragmatic, moderate candidate? That, alas, would be no one.