Don't freak out, but we might be geoengineering with contrails 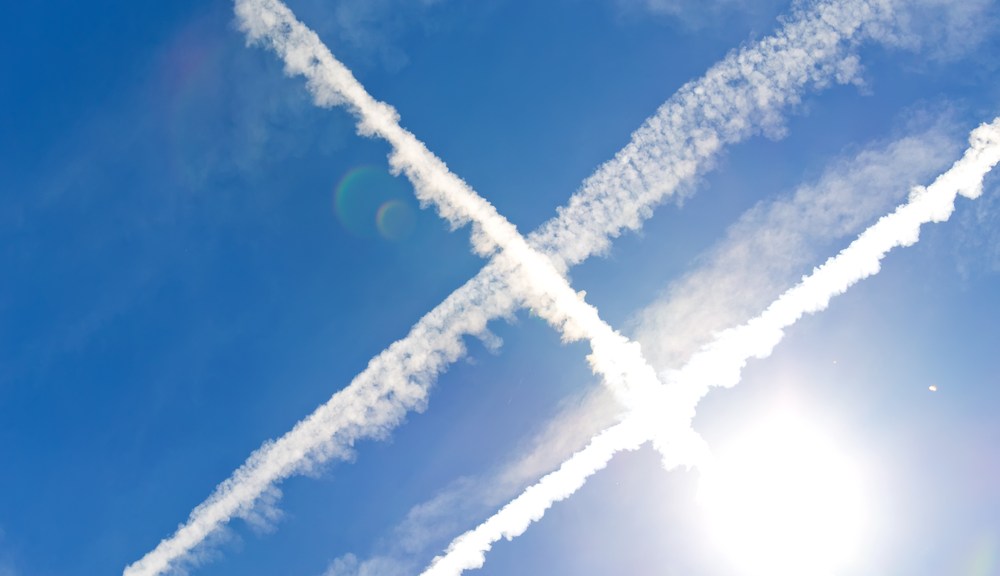 Don’t freak out, but we might be geoengineering with contrails

Well, shoot. We may have been geoengineering the planet for years without even realizing it, bringing what could be a very anti-climactic end to an otherwise epic should-we-or-shouldn’t-we debate. It’s like that time I thought all day about whether or not to finish that pint of ice cream in my freezer, only to discover when I got home that I’d already finished it.

The question of whether or not we should geoengineer — i.e. directly tinker with the planet to combat climate change by, say, sucking CO2 out of the air or spraying particles into the atmosphere to reflect sunlight — is a controversial one. People tend to think it’s either our only chance of survival or the quickest way to extinction. But at the fall meeting of the American Geophysical Union earlier this week, researchers announced that we’ve actually already been doing it this whole time, Smithsonian reports. To which, presumably, everyone in attendance responded the same way I did when I opened my freezer: “Awww, man!”

And to make matters worse, the process by which we’ve been geoengineering involves airplane contrails, the age-old darling of conspiracy theorists.

Here’s the scoop from Smithsonian:

If you go outside on a clear day and look up toward the sun — being careful to block out the bright disk with your thumb — you might see a hazy white region surrounding our star.

This haze is caused by airplanes, and it is gradually whitening blue skies, says Charles Long of NOAA’s Earth System Research Laboratory in Boulder, Colorado.

… Long and his colleagues don’t yet have enough data to know how much of an effect the icy haze left by airplanes may be having on the climate or whether it is contributing to warming or cooling. But its existence demonstrates yet another way that humans might be altering the climate system, Long says, and “you can see this with your own eyes.”

OK — so there are a lot of unknowns here. But based on data that Long gathered in Oklahoma, this icy haze appears to be scattering sunlight on its way to Earth the same way that so-called stratospheric aerosols would if we intentionally injected them into atmosphere like some geoengineering proponents suggest, Smithsonian reports. And if that’s the case, then we’ve been geoengineering the hell out of this place for quite some time.

In a testament to the work, Kevin Trenberth of the National Center for Atmospheric Reserach told Smithsonian: “It seems quite possible that [Long is] seeing something that’s real.” That’s certainly more than anyone can say about any other mysterious phenomena reported over Oklahoma.

Of course, we were actually geoengineering long before the Wright brothers took to the skies. Anthropogenic climate change is geoengineering. Now we just have to decide whether we’re going to do it intentionally. In the mean time, let’s get to the more important question: Why is the government doing all this secret geoengineering? And what else are they putting in these contrails? My money’s on a fleet of tiny nanobots that feed on sunlight and self-assemble into the GOP candidates ever time someone says “immigrant” three times. That, or whatever this guy says.