“Ocean explorer” sounds like a pie-in-the-sky job description, like “adventure archaeologist” or “Jedi.” But for David Gruber, it’s his actual title. A 2014 National Geographic emerging explorer who studies bioluminescence and fluorescence, Gruber hones in on the areas of the world that are still big unknowns and dives deep into them — way deep. Over the years, as Gruber has studied what goes on hundreds of meters below the surface of our seas, he has discovered hundreds of species and even identified entirely new marine phenomena, including some that could lead to breakthroughs in medical research.

A deep thinker, Gruber brings a philosophical approach to his science. He was first drawn to study bioluminescence because it was “an area that was artistic and beautiful to me, and that was really unknown.” Plus, he has an eye for the big picture: “It’s not like we’re just looking at it right now at this moment in time, we’re seeing the ocean as a compilation of genes and organisms that took millions of years to get to this place we’re at now.” And that, he says, gives us a context to understand how we’re changing things now.

We talked with Gruber about his explorations and discoveries, what it’s like to see in a primarily blue world, and what it means that we’re still, today, plumbing the unknown depths of our oceans. Here’s an edited and condensed version of what he had to say.

On the deep sea:

It is a beautiful and foreign place. Sometimes when we do explorations — like we’re down at 1,000 meters and looking at the different creatures on the seafloor there, at these beautiful geologic structures down there — you have to be pretty confident that not many other humans have been down there. I’m a big fan of space exploration, but in some ways I wonder why more people aren’t looking down as opposed to other planets. It’s really only been in the last 20, 30 years that we’ve had the technology to get down and around the deep sea. We’re finally at a point where we could start peeking around and really understanding it.

On the magical moments:

There was this one experience with bioluminescence that I always think back on. … Once when we were underwater in the South Pacific, a couple members of our team came up and signaled to me to turn my light off. We swam to a nearby part of the reef, and there was this massive congregation — like tens of thousands of flashlight fish — in just 20 feet of water. We had never heard of a gathering of these animals in the shallows before. We stayed underwater for like two hours with all our lights off, in the middle of all the tremendous congregation of flashlight fish using their blinking to communicate with each other. It was such a magical moment. 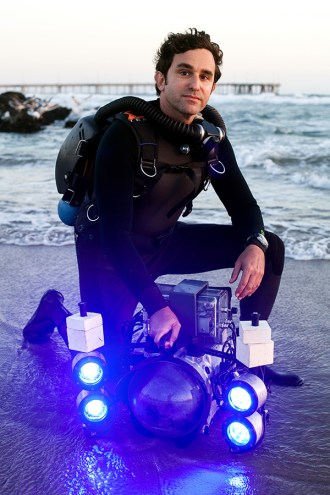 On being a modern-day explorer:

I’ve always been inspired by previous explorers. But if you think back to the first polar expeditions and the first jungle expeditions, their explorations were focused on the idea that it’s the first time humans are going to these places, and coming back out with samples of things just to show that they’ve been there.

But the thought that exploration is a way of conquering nature is really outdated. I wouldn’t fathom going out and coming back with a whole bounty of things to show people that we’ve been to these places in the deep sea. I think that comes with the realization that we’re much more dominant than all the other species, and with that great power and technology comes a greater responsibility. Exploration is now about showing where things fit among all the other species.

I think it’s also different in that I go about exploration as a gentle process. A lot of deep sea exploration has been with submarines and remote operated vehicles that have big titanium arms, designed for the oil and gas industry. I’m working to do really kind of delicate, gentle collection with soft robotics — and to load down on all the information we can from just one specimen. Even though the deep sea is so vast and unknown, I think it’s important for scientists to set the precedent that we’re taking steps to be gentle as we explore.

On stumbling upon the brave new world of biofluorescence:

So, as soon as you start descending underwater into the ocean, you start losing wavelengths of light. For example, at ten meters you start losing red light. Once you’re down at 100 meters, it’s just this bluish light with a little bit of green. But photons can be functionally important down to 600, 700 meters deep. So, when you think about it, that’s a massive chunk of our planet that’s just one color: blue. And that’s the environment where biofluorescence is really important.

[Biofluorescence is] a process in which animals are able to absorb blue and emit it as other colors. In order to find the phenomena, we’ve had to put ourselves in the perspectives of the animals within the ocean. Most of the time when people study the deep sea, we send these submarines down with huge lights — which seems kind of silly, because the animals that live there never see light like that.

Instead of that, we started thinking, “What is different about living in a primarily blue world as opposed to our world on land, which has all of the colors of the rainbow?” And as we were thinking along those lines, we noticed there were a lot of things that fluoresce.

We came across a whole suite of fish that were fluorescing. It was like a Sherlock Holmes mystery to us — we know corals fluoresce, but we were so surprised to find fluorescing fish. So we then looked to see what their vision is like, what their eye is like, to see what role this fluorescing is playing. And we found a couple of cool things: one is that some of the fish that are fluorescing have these special filters in their eyes, so the fluorescent light that’s coming off their species creates contrast for them and it allows them to signal patters at each other. It’s like a cryptic mode of communication.

On how biofluorescence helps human health:

Early in my career I was approached by a neuroscientist who told me how a jellyfish and coral florescent protein was playing a big role in research, because they could essentially use it as like a bicycle reflector that could go on the end of genes. It was one of the most revolutionary tools in terms of allowing scientists to peer inside the inner workings of living cells.

The protein fascinated me because it was a tool coming from different marine environments. I think there are few areas of science where the discoveries you’re making are also used by other groups of scientists to help advance their fields. So we began cloning new fluorescent proteins from corals reefs, and now we’ve been cloning fluorescent proteins from fish and we tried to clone them from a shark. We’re both trying to understand the biochemistry of the animal and then also provide new tools — one of the proteins we found from a coral is now being used to find new cancer drugs.

On the real value of the oceans:

I always try to avoid the bio-prospecting angle [to conservation]. There are so many more reasons to protect the ocean other than the fact that we can use it to find new medicines for us. The ocean represents our creative human heritage of where our genes came from. We should be interested in protecting and respecting it even if an animal isn’t making a protein that could be used for pioneering cancer drugs. But it does show that there are so many reasons why we should protect biodiversity.

An analogy that I sometimes use is that it would be like burning library books. We have this beautiful, gorgeous, Library of Congress–esque collection of species and genes in our oceans. And in the last 100 years, we’ve been accelerating the rate at which these books are being burned. That is one thing I find disheartening as a coral scientist — coral reefs are considered the most biodiverse marine systems, but anybody who studies coral reefs will tell you that they’ve dramatically changed over the last ten years. It’s hard to continue to study this shrinking ecosystem without wanting to take action and protect it.