1,400 mayors: If Trump won’t lead on climate action, we will 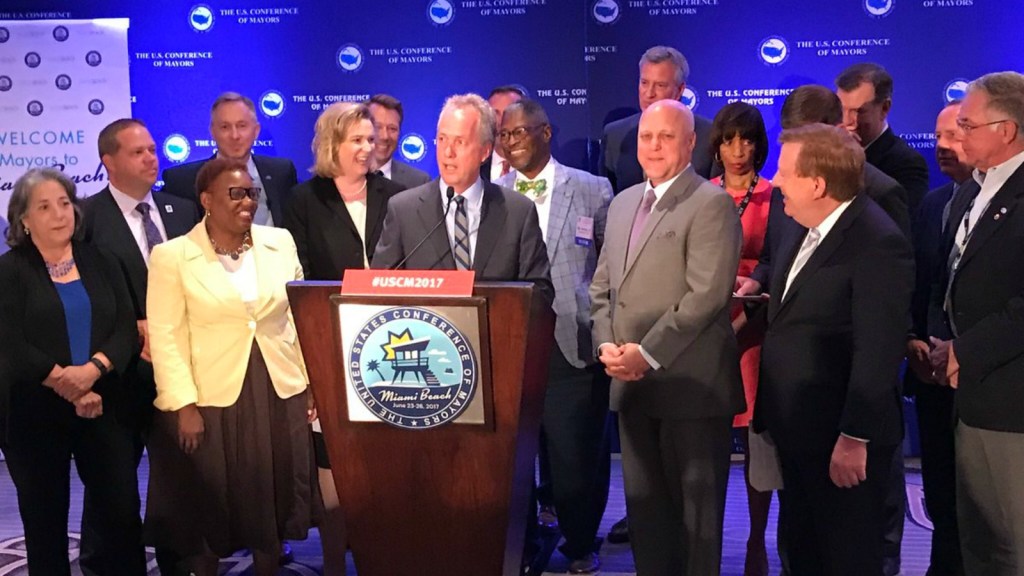 1,400 mayors: If Trump won’t lead on climate action, we will

The nation’s mayors sent a strong message to the Trump administration: If the federal government won’t take the lead on fighting climate change, they will.

At their annual summit that concluded Monday, the bipartisan U.S. Conference of Mayors, which represents more than 1,400 mayors nationwide, passed several resolutions pushing back against President Donald Trump’s policies on climate change. It included a call to Congress and the president to commit to environmental initiatives such as the Paris climate agreement and the Clean Power Plan. The country’s largest coalition of cities also passed a landmark resolution supporting cities’ transitions to 100 percent renewable energy by 2035. The resolution was passed unanimously, the Guardian reported.

The resolutions adopted at the summit — which also covered immigration, health care, and other issues — may be nonbinding, but they sent a clear signal that many mayors, both Republican and Democrat, aren’t pleased with the direction that Trump’s administration is leading the U.S. on issues like the climate, refugees, and health care.

And they made it known they won’t be standing idly by.

Mayors have led this nation forward for generations. This is the legacy we inherit. Today, we stand at another moment.

Mayors from cities and towns across America are leading with an Agenda for the Future. Read our plan here: https://t.co/8iBLL5kkf9 @usmayors

Mayors: It is our time. Let’s seize the moment. And let’s get back to work. @usmayors #uscm2017

More than 120 mayors have already endorsed goals to adopt 100 percent clean energy in their cities in the coming decades. Of that number, more than 30 have made formal commitments to reach that goal.

The environmental nonprofit Sierra Club told HuffPost last week that if all 1,481 cities represented by the U.S. Conference of Mayors were to switch to 100 percent renewables by 2035, American greenhouse gas emissions would fall by 619 million metric tons, equal to about 42 percent of U.S. electricity consumption. Even if just 120 cities make the transition, emissions would drop by more than 34 million metric tons.

Since Trump withdrew the U.S. from the Paris Agreement earlier this month, American mayors have been stepping up to take the lead on climate change.

In the aftermath of Trump’s Paris decision, the mayors of more than 1,200 cities and towns joined an alliance called We Are Still In, which pledges its continued support of the international climate accord.

“The Trump administration’s announcement undermines a key pillar in the fight against climate change and damages the world’s ability to avoid the most dangerous and costly effects of climate change. Importantly, it is also out of step with what is happening in the United States,” the group said in an open letter. “In the U.S., it is local and state governments, along with businesses, that are primarily responsible for the dramatic decrease in greenhouse gas emissions in recent years. Actions by each group will multiply and accelerate in the years ahead, no matter what policies Washington may adopt.”