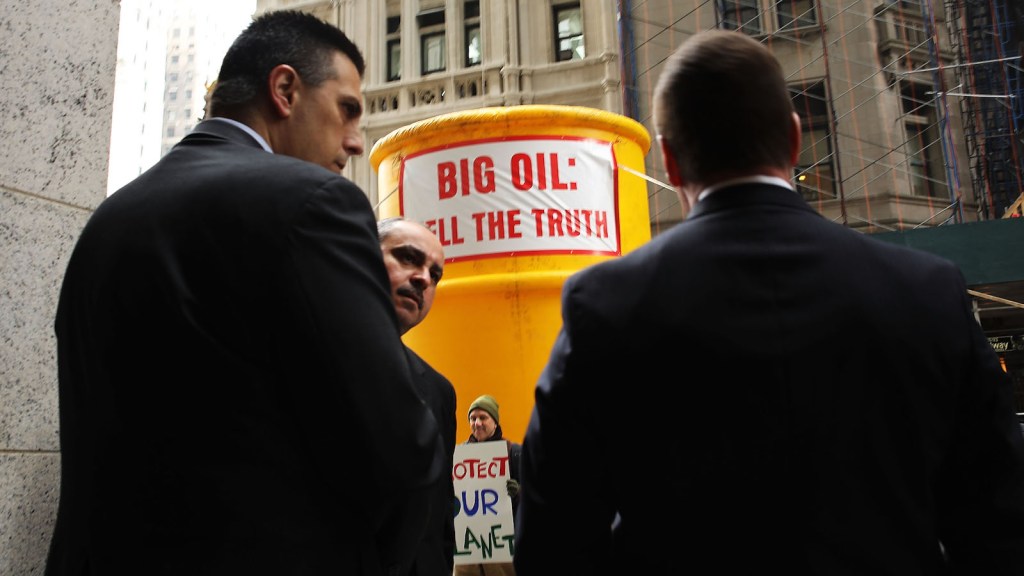 Turns out, fossil fuel interests love “Losing Earth.” The New York Times Magazine’s massive climate change article from earlier this month has attracted furor from critics, who argue that it sidesteps issues of climate change denial and fossil fuel lobbying. But recently, it has also drawn praise from supporters of ExxonMobil.

“Bombshell: New York Times debunks #ExxonKnew climate campaign,” crows a headline on the website of Energy in Depth, an oil and gas lobby group funded by BP, Shell, Exxon, and others. For reference, #ExxonKnew is a campaign that aims to hold Exxon accountable for researching and accepting the science of climate change in the 1980s — and then spreading misinformation about it for the next several decades.

You don’t have to read all 66 pages of “Losing Earth” to see that the Times is definitely not debunking #ExxonKnew. You only have to read the epilogue, in which author Nathaniel Rich describes some of the denial campaigns launched by Exxon and the petroleum industry’s so-called Global Climate Coalition. Rich is aware of the role Exxon played in spreading and perpetuating climate change denial. But he does shift some blame off of fossil fuel groups and conservatives, and on to the amorphous concept of “human nature.”

“The rallying cry of this multipronged legal effort is ‘Exxon Knew,’” Rich writes. But, he counters, “The United States government knew … Everyone knew — and we all still know.”

This narrative — however well-intended and well-executed — plays right into Big Oil’s hands.

Advertising the Losing Earth issue as a win for Exxon is low-hanging fruit — Look! Even the left’s favorite newspaper is hesitant to blame us for climate change!

For oil and gas companies, it also represents a new play on an old, tired trick.

“Putting out these ads just proves the point that they’re trying to manipulate public opinion and confuse people about who’s to blame for this crisis,” Jamie Henn, communications director at 350.org, tells Grist.

For years, Exxon faced off against established science, lobbying against environmental regulation in Congress, publishing reports that undermined action on climate change, and putting out ads (in papers like the Times!) that spread doubt about the causes of global warming.

As temperatures rise and the effects of climate change — crazy wildfires, mega-hurricanes, heavier downpours — become more and more visible, Exxon and other companies like it have shifted their marketing approaches to keep their ships upright in the sea of public opinion. Whereas Exxon used to rely heavily on Earth’s “natural changes” to explain away rising temperatures, it’s now changing course to accommodate the fact that a clear majority of Americans accept the science behind climate change.

One of its new strategies is to advertise low-carbon energy projects, says Ed Collins, a research analyst at U.K.-based nonprofit InfluenceMap. Shot-in-the-dark projects, like ExxonMobil’s algae push, intend to show the public and politicians that the free market and technological innovation, not government regulation, can solve the dangers posed by climate change.

Rich’s piece is an unexpected gift for an industry that’s trying to show that it’s on the side of the people — and on the right side of history. Finally! An opportunity for Big Oil to align itself with journalists and historians rather than climate deniers.

But at the end of the day, Henn says, it’s just one article. “The idea that Exxon and its front groups somehow think they’re off the hook because one New York Times Magazine journalist wrote a story one particular way is pretty naive,” says Henn.

Plus, the tides of public opinion may have already turned. BP is still dealing with fallout from the Deepwater Horizon oil spill, in which nearly 5 million barrels of oil spilled into the Gulf of Mexico. And a slew of cities, districts, and attorneys general across the country have launched lawsuits and investigations against major polluters for the role they played in misinforming the public about climate change.

“I think people are realizing that companies like ExxonMobil should be the ones to pay for the damage that they’ve done,” says Henn.