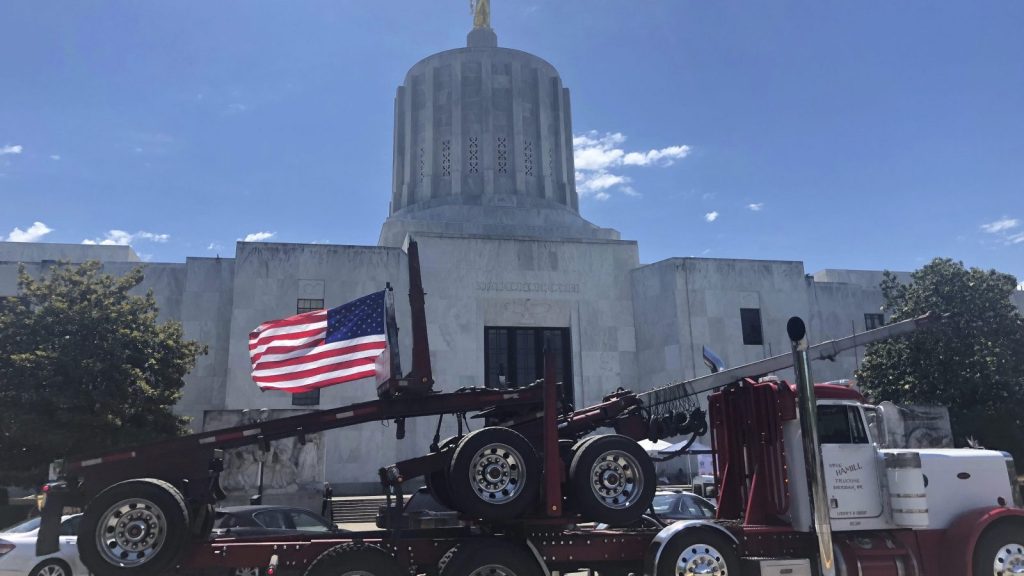 Oregon was thiiiiiiis close to passing a sweeping climate bill, which would have made it the second state after California to make businesses in every sector of the economy pay up for emitting greenhouse gases.

But it appears to be dead, at least for now. Last week, Republicans bolted from the state capital, going into hiding instead of allowing Democrats to vote on the cap-and-trade bill widely expected to pass. And then on Tuesday, Senate President Peter Courtney, a Democrat, announced that the “Clean Energy Jobs Bill” did not have enough Democratic support to pass.

“What I’m about to say I say of my own free will. No one has told me to say this,” Courtney said. “HB 2020 does not have the votes on the Senate floor. That will not change.”

Wait, what? Activists and senators alike were shocked to hear that the bill was being tabled. “Jaws hit the floor,” said Brad Reed, communications director at the environmental group Renew Oregon, who was at Courtney’s announcement on the Senate floor.

“Even a few days ago, we had 16 yeses to our faces,” Reed said. The bill needed 16 of the 18 Democratic state senators on board to pass. “We don’t know who’s not telling the truth, or maybe whose mind changed.”

The working assumption is that Courtney is jettisoning the climate bill in an attempt to bring back the Republicans to vote on the 125 other bills awaiting votes before the legislative session ends … on Sunday. Totally doable.

The Clean Energy Jobs Bill was originally scheduled for a vote last Thursday, before all 11 of Oregon’s Republican state senators fled Salem and went into hiding. (The state House passed the bill earlier this month.) Their main objection is that the bill would raise gas prices.

Governor Kate Brown, a Democrat, ordered the state police to bring back the Republican lawmakers, who face $500 fines for each day they’re absent from their jobs. Meanwhile, militia groups such as Oregon III% offered the senators refuge.

The Republican’s absence left Democrats two lawmakers short of a quorum, the minimum number of lawmakers needed to vote on anything.

Democrats won supermajorities in Oregon’s House and Senate in the last election, giving the state a goodshot at passing cap-and-trade — something it’s been trying to accomplish for a decade. The previous failed attempt came last year, when lawmakers set aside their plans because Democrats couldn’t agree on the details. It’s been a trend in the deeply blue Pacific Northwest. Up the road in Washington state, two different carbon taxes failed last year, one in the legislature and one on the ballot in November. Commentators have been left wondering whether states on the West Coast would take serious action on climate change after all, or whether carbon pricing schemes were just plain politically impossible.

Oregon climate activists have persisted, working with lawmakers on the current bill, which would join the state up with an existing cap-and-trade program in California. The plan would place a cap on greenhouse gas emissions that would come down over time, and establish a market for companies to buy and trade pollution credits.

The Republican senators on the run aren’t convinced the bill is truly dead. “The question becomes: What are they trying to do?” Cliff Bentz, a Republican state senator who’s rumored to be hiding in Idaho, told Oregon Public Broadcasting. “Are they trying to make some sort of arrangement? If they are suggesting they don’t have the votes, what’s the procedure they’re going to use to kill the bill? Are they going to call it up for a vote?”

The state Senate minority leader, Herman Baertschiger Jr., said that Republicans need further assurances before they return to Salem. They fear that Democrats might have some tricks up their sleeves.

In any case, it’s unclear exactly how Courtney could kill the bill, as a motion to do so would require at least a couple of Republicans to return to Salem to reach a quorum.

“Senate Republicans have blocked a bill that provides a better future for our state and for our children, and the tactics they employed to do so are not just unacceptable, but dangerous,” Governor Brown said in a statement on Tuesday. She had previously mentioned that holding a special session in July was a possibility.

“I’m not giving up on passing strong climate legislation this session and I will not lose hope,” said State Senator Tina Kotek, a Democrat, on Twitter. “This has been a dark week for the integrity of the Legislature. Senate Rs have been threatening our democratic institution and subverting the will of Oregon voters who know we need to act now. Their walkout has come at immense cost to our institution and potentially the planet.”