There’s a new advertisement running in the New York Post that looks vaguely like a Chipotle ad. The colors and the font are the same you’d see in any Chipotle campaign, but instead of a prominently featured burrito wrapped in tin foil, there’s an image of a man. He’s pale and shirtless, with one arm flexed and the other resting on his abs — or where his abs would be if he had any. His ample stomach spills over this waistband, his stretch marks are visible from the moon, and he appears to be wearing sweatpants. He’s fat, and, the ad wants you to know, it’s Chipotle’s fault. “Eat two ‘all natural’ Chipotle burritos a week,” the text reads, “and you could gain 40 pounds a year.” 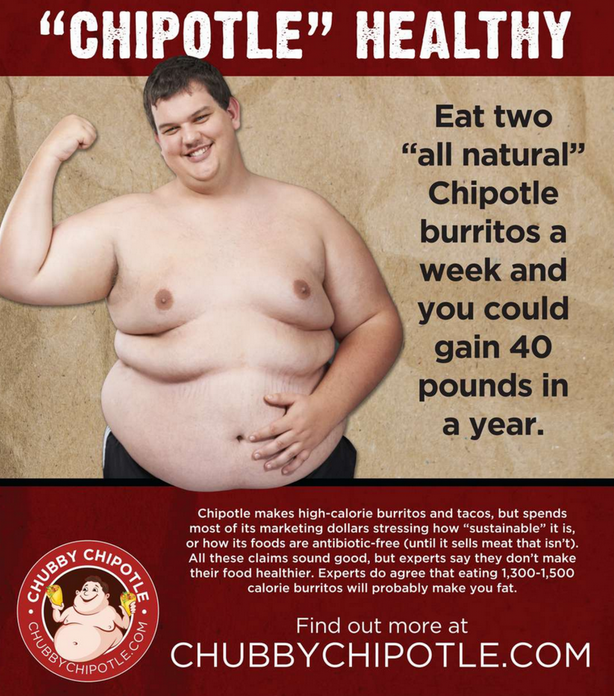 This is not, obviously, an actual Chipotle ad — which is more likely to emphasize all-natural ingredients than potential weight gain — and it’s clearly meant to challenge the notion that Chipotle is healthy. But it’s not salad makers or the lentil lobby or Mothers Against Obesity behind this campaign: It’s Richard Berman, notorious spin doctor and friend of big business. As David Roberts wrote earlier this year:

What Berman does is start nonprofit “educational” groups as a thin front for his business. The Center for Consumer Freedom works to discredit anti-obesity campaigns. The Employment Policies Institute battles campaigns to raise the minimum wage. And so on. (He’s got dozens). These groups often have no address but that of Berman and Company, no employees but Berman, and no one on their boards but industry reps and current and former Berman and Company employees.

The nonprofits then hire Berman and Company to run PR campaigns. The beauty of this arrangement, from industry’s perspective, is that nonprofits don’t have to disclose their donors. So industries can funnel money to Berman without being identified with it. And he can say and do things they would never, ever be publicly associated with. The nonprofit groups serve, effectively, as money laundering/anonymizing operations.

In this case, it’s Berman’s Center for Consumer Freedom behind the anti-Chipotle campaign, although you’d only know that if you go to the ad’s associated website — ChubbyChipotle.com — and notice a small banner at the bottom with the CCF logo. “We believe Americans can make their own choices about what to eat and—yes—indulge if they want to,” the website reads. “But we also don’t support false marketing that distracts from substantive issues. … Chipotle claims to be ethical but its marketing is an empty ploy.”

This may be true, at least in part. Chipotle’s announcement that it would be moving to GMO-free ingredients in particular seemed designed to capitalize on anti-GMO fervor, and the media responded to the policy shift with less enthusiasm than Chipotle likely hoped. Our own Nathanael Johnson wrote that while Chipotle’s move toward antibiotic-free meat is a big deal, their GMO-free policy is not, because “you still get the herbicides, and maybe more insecticides.”

And yet, regardless of the company’s desire to profit off GMO fears, anything associated with Richard Berman or the Center for Consumer Freedom name smacks of hypocrisy. Here’s an example, from CCF’s website:

Unfortunately, Americans have been force-fed a diet of bloated statistics hyping the problem of obesity. Those statistics have been used by Big Brother government bureaucrats and greedy trial lawyers to justify a host of noxious “solutions,” like extra taxes on certain foods and lawsuits against anyone who grows, makes, or serves anything tasty.

It does seem curious that a group that the decries “hyping the problem of obesity” is buying ads accusing Chipotle of making people fat. Then again, public health is hardly Berman’s cause. “Initially, the group was founded to fight smoking curbs in restaurants,” writes Roberto A. Ferdman in the Washington Post. “The money, of course, came from the coffers of tobacco companies and restaurants. But it has since shifted its focus to the food and beverage industry, where many large players are worried about the impact of health, nutrition and animal welfare concerns.”

Because the CCF doesn’t have to disclose donors, we don’t know who those large players are. But whoever they are, they’re probably less concerned with your body mass index and more concerned with where you spend your lunch money.

What America can learn from Europe’s high-speed trains