Greenland, the land of ice and snow, is burning 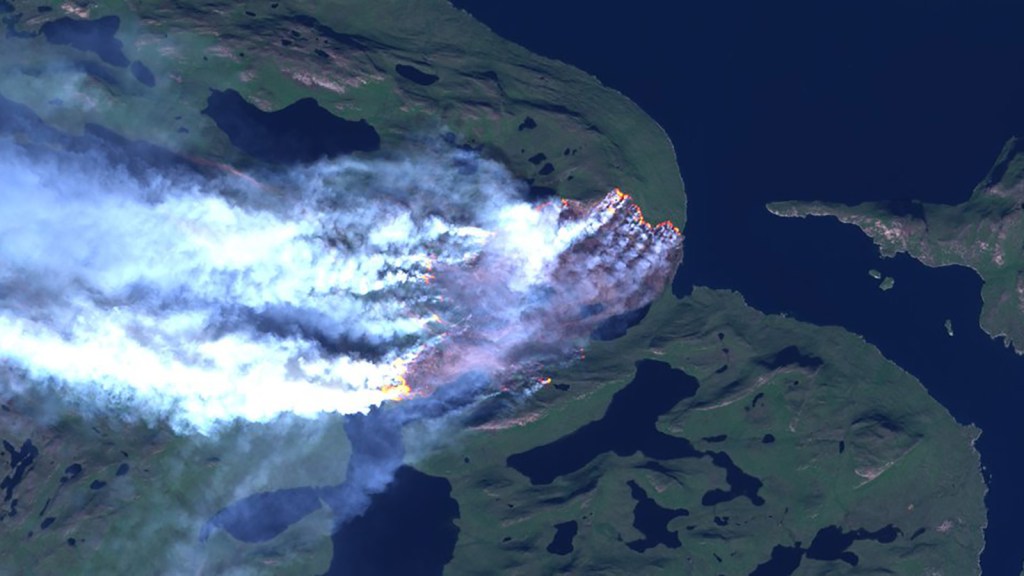 Greenland, the land of ice and snow, is burning

This is going to sound weird, but there’s a wildfire right now in west Greenland. You know, that huge island of mostly ice? Part of it is on fire.

There’s been nothing even close to this since reliable satellite-based fire detection records began in Greenland in 2000. Very small wildfires can evade satellite detection, and old-timer scientists who have worked in Greenland for decades say that micro-fires there aren’t necessarily uncommon.

This week’s fire, however, is on another level.

“This is the largest wildfire we know of,” says Stef Lhermitte, a satellite expert at Technische Universiteit in Delft, Netherlands, who did some of the initial mapping of the fire. “For a lot of people, it’s been a bit of discovery on the go.” The fire was first spotted by a local aircraft on July 31.

The Greenland fire evolution since July 29 as captured by @ESA_EO 's #sentinel2 pic.twitter.com/Iuk9blyui9

What’s striking about the Greenland fire is that it fits a larger trend of rapid change across the northern reaches of the planet. A 2013 study found that across the entire Arctic, forests are burning at a rate unseen in at least 10,000 years.

By American standards, the Greenland fire is small, covering around 1,200 acres (about two square miles) — about the size of midtown Manhattan. The massive Lodgepole Complex wildfire that scorched eastern Montana in July — the largest fire in the country this year — was more than 200 times bigger. But for Greenland, a fire of this size is so unusual that even scientists who study the huge island don’t really know what to make of it.

The Danish meteorological service (Greenland is technically an autonomously governing part of Denmark) said it has no experts who specialize in Greenland fire. The European Commission has tasked its Emergency Management Service with a rapid mapping of the region of the fire, in part to help local officials assess the risks to public health. Mark Parrington, a meteorologist with the European government, said on Twitter that he “didn’t expect to be adding Greenland into my fire monitoring,” adding that he may need to recalibrate his air pollution models to account for the smoldering way that fire tends to burn in permafrost soil.

Riikka Rinnan, an ecologist at the University of Copenhagen, said her research team had started work earlier this summer on how potential fires could impact Greenland’s tundra, but didn’t expect one so soon. Jessica McCarty, a satellite data expert at Miami University in Ohio, said she’s planning to have one of her students construct what might be the first-ever comprehensive history of fires in Greenland.

And yes, as you might expect, climate change probably made this whole thing more likely.

“Everything we know suggests that fire will increase in the Arctic,” climate scientist Jason Box, whose work focuses on Greenland, told me. “It’s fair to say that it’s part of the pattern of warming. We should see more such fires in Greenland.”

Though west Greenland, where the fire is burning, is a semi-arid region, rainfall and temperatures there have been increasing, helping to foster more dense vegetation. Box says this is part of the “shrubification” of the entire Arctic as temperatures warm and the growing season lengthens. Denser vegetation is making large fires more likely, in combination with the simultaneous tendency for longer and more intense droughts and the rise in thunderstorm likelihood due to erratic weather patterns.

Box says he saw a fire in west Greenland back in 1999. “It’s pretty interesting for Greenland, people don’t think about it as a place where that’s possible — nor did I until I saw it with my own eyes.” Once he realized he was watching a wildfire, he said, “It was like, what the heck? What is going on?”

What set off this blaze? The scientists I spoke with aren’t sure. The primary cause of Arctic wildfires is lightning, but a lightning storm in Greenland would have been news. Thunderstorms typically need warm, humid air for fuel, and both are in short supply so close to the world’s second largest ice sheet.

According to John Kappelen, a Danish meteorologist, the region surrounding the fire has had well below average rainfall since June, making wildfire more likely.

“This time of year, everybody’s going out and picking berries and fishing and hunting,” says Ruth Mottram, a climate scientist at the Danish meteorological service who conducts frequent fieldwork in Greenland. Maybe someone in the area set a fire that grew into the big blaze. Greenland’s second largest town, Sisimiut, with a population of 5,500, is about 90 miles away.

Mottram says that if the fire is burning in peatland, it could rage for weeks. If the winds shift, soot from the fire could be transported up to the ice sheet, where it might speed local melting in the coming years by darkening the surface of the ice, helping it to absorb more energy from the sun. This is something that scientists like Box and Mottram are spending their careers studying, but up to now, they thought that virtually all the soot that’s making the bright white ice darker was transported there from Canada or Russia. Now, a new source may be emerging.

Should wildfires like this one increase in frequency, we may have just witnessed the start of a new, scary feedback loop.