Joe Biden wants to be the anti-Trump. Here's what that could mean for climate policy. 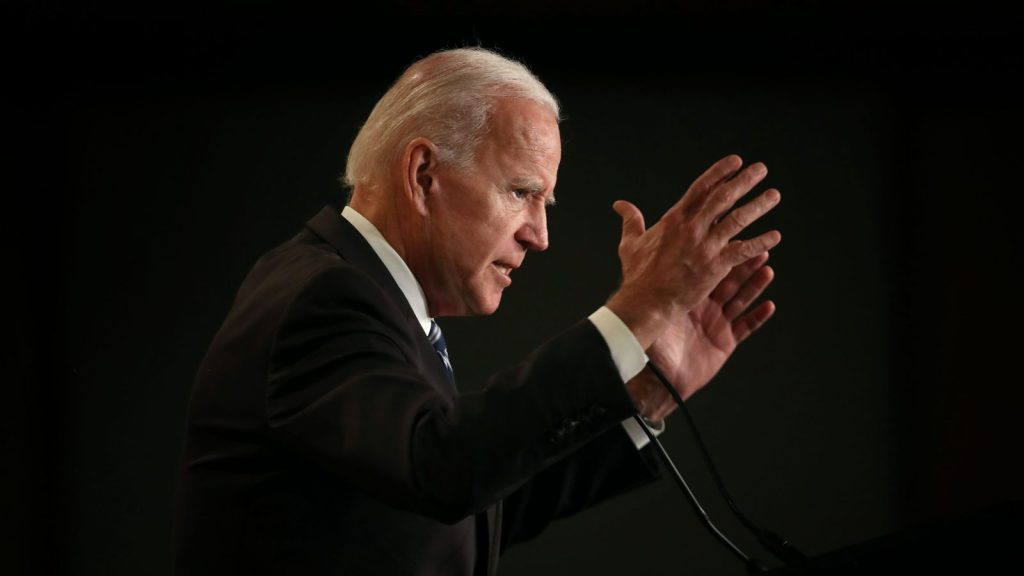 Joe Biden wants to be the anti-Trump. Here’s what that could mean for climate policy.

Let’s play a game called two truths and a lie:

For all those who guessed that No. 2 is the lie, you are correct! Congrats. The Democrat has not, in fact, endorsed the Green New Deal. Nor has he gone on record about supporting carbon pricing, a climate solution embraced by most political moderates.

Biden announced Thursday morning that he is throwing his ice cream-stained cap in the 2020 presidential ring, which means the already-crowded, left-lurching Democratic primary has its most establishment member yet in the 76-year-old former vice president. In a video that focuses heavily on the 2017 white supremacist rally in Charlottesville, and the current White House occupant’s shocking response to the event, Biden clearly positions himself as the antidote to Donald Trump.

The longtime senator from Delaware has been under scrutiny for months as the media anticipated his official announcement. Dozens of stories have probed his decades-long record. And a month ago, Lucy Flores, a Democratic politician from Nevada, accused him of unwanted touching. Since then, a number of women have come forward with similar stories.

The accusations and the background checks didn’t stop the Democrat from joining the 2020 race. His launch video eschews any talk of issues, so what can we expect from Biden when it comes to tackling climate change? Let’s take a trip down memory lane.

Amtrak Joe was actually the first to propose climate legislation in Congress’s upper chamber — a bill called the 1986 Global Climate Protection Act that would have done what Nancy Pelosi’s Select Committee on the Climate Crisis does now: “Establish a Task Force on the Global Climate to research, develop, and implement a coordinated national strategy on global climate.” Imagine how useful such a panel might have been three decades ago. Unfortunately the president at the time, Ronald Reagan, wasn’t exactly champing at the bit to address rising temperatures.

Between his early days in the Senate and now, Biden’s most notable climate-related accomplishment was serving as Barack Obama’s sidekick for eight years. The administration was especially focused on climate action, especially during its second term (think: CAFE standards, Clean Power Plan, the Paris agreement, among other achievements). Following the 2008 recession, Biden handed out $90 billion in funding for clean-energy programs and called the move “the thing I’m proudest of” from the administration’s first term. In a 2015 speech, the vice president said tackling climate change was “the single most important thing” the White House could do.

Overall, however Obama’s climate record is far from spotless: He bragged about helping the U.S. become the world’s leading oil producer. And part of his energy plan included handing Shell a permit to drill in the Arctic and promoting offshore drilling. Biden might now have to answer for those decisions.

Today, as the chatter left of the aisle centers on the Green New Deal, it’s clear that ideas like the Obama-era “all of the above” energy strategy aren’t going to fly in the Democratic primary. Already, five 2020-bound senators have signed on as cosponsors of the ambitious equity-focused, economy-transforming proposal offered by Representative Alexandria Ocasio-Cortez and Senator Ed Markey. A slew of other candidates not serving in the Senate have thrown their support behind the idea, too.

Biden, however, has so far been uncharacteristically quiet on that front. But, in a speech at the Conference of Mayors in January, he gave the audience a taste of what his thinking around climate is these days:

Biden wrapped up his speech with a call to arms: “We cannot continue down this blind path,” he proclaimed. “We cannot ignore science, we cannot abdicate our duty to lead the world.”

It’s no accident that Biden spent a third of his 30-minute speech expounding on his record on the environment and enumerating ideas to tackle climate change. With the clock ticking on much-needed action, the issue is often on the lips of many challengers vying to take on Donald Trump — and then, hopefully, warming.