So you’ve decided to watch CNN’s Climate Crisis Town Hall on Wednesday evening. That means you’re either a climate wonk who’s willing to spend seven hours of your precious free time listening to politicians prattle about global warming, or you can’t figure out how to change the channel. Either way, hello and welcome!

The town hall’s rules of engagement are simple. Ten presidential candidates will have 40 minutes each to share their ideas for fixing humanity’s biggest and scariest problem ever. And what better way to prepare you to digest that marathon strategy-fest than a little climate action aperitif?

That’s right, we’ve come up with the ultimate drinking game to complement the delicate aroma of the world bursting into flames. (Though abstainers should feel free to stick with us and sub a couple of Marianne Williamson’s pre-debate yoga moves).

If you follow our nifty drinking guide, our goal is to leave you sober enough to decipher Bernie’s thick Brooklyn accent but drunk enough to keep the TV on when Biden promises to unlock the power of “American innovation.” (Drink!)

The game itself is simple: climate candidate bingo! Keep tabs on each presidential wannabe’s quotable quotes and take a sip for each phrase that gets mentioned. We’re sure the multiple hours of dense, environmental policy proposals will just fly by. (You can download a PDF version of the bingo board here.) 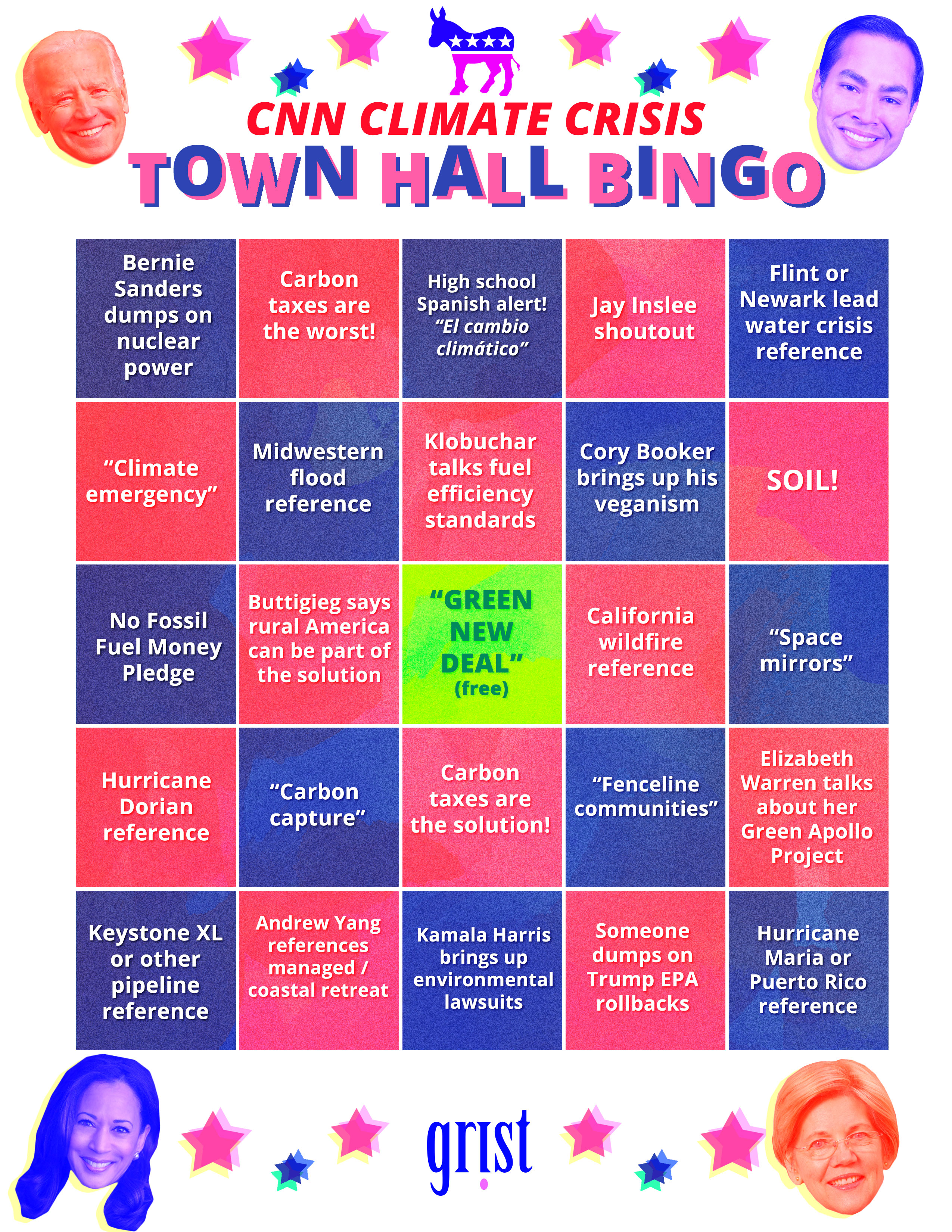 The games begin at 5 p.m. Eastern with former Housing and Urban Development Secretary Julián Castro. The “fun” won’t end until Cory Booker closes out starting at 11:20 p.m., so consider chugging some water at least every time CNN switches moderators or you’ll be Wolf Blitzer-ed by the time Amy Klobuchar rolls up.

Pregame idea: Raise a glass to the dearly (Democratically) departed.

Your brain (and liver) should probably be grateful that not all of the original 20-some Democratic candidates have made it this far in the election cycle. But a few drop-outs had some interesting climate ideas along the way. If you’re up for pregaming, consider pouring one out for the following candidates:

Jay Inslee — Ah, the original “climate candidate.” The Washington governor’s impressive environmental record and, um, crowd appeal will be sorely missed during this town hall. I would tell you to take a shot for every climate plan Inslee released during his run for president but there are six of them and I’m not trying to kill you. So slowly sip a sustainable beverage for dear old Jay as you scan the remaining candidates for your new “climate daddy.” (Google if you dare.)

John Hickenlooper — The former Colorado governor is gone from the presidential foray but not forgotten (because he’s running for Senate). His climate plan, however, which didn’t do much to offset his history of boosting fracking in his state, might merit a little forgetting. If you do drink to his memory, just make sure it’s not fracking fluid — that’s John’s job.

Kirsten Gillibrand — The #metoo candidate was the most recent campaign casualty in the rapidly thinning Democratic primary. She is survived by her impressive $10 trillion climate plan, which includes a tax on carbon pollution. Raise a glass of whiskey, Gillibrand’s “favorite comfort food,” to that.

Need some additional entertainment? Spice up the evening with a few of the following challenges:

Seven hours of climate policy might feel like a poor substitution for, say, an official climate debate, but it’s a major step up for broadcast media. Last year, national broadcast networks spent only 142 combined minutes discussing the issue.

Ideally, an uptick in coverage would be spread out over the course of several months, not concentrated in one brutally long political masterclass. But the occasion seems to have prompted a number of 2020 procrastinators to release climate plans ahead of the event. On Tuesday, Warren, Klobuchar, and Booker unveiled proposals, and Buttigieg slid in just under the wire, releasing his climate plan Wednesday morning. Harris said she also intended to release a plan pre-town hall.

But you know what? We’ll take what we can get, even if it’s too little too — Ding dong! Who’s there? The delivery guy with the baked potato you drunkenly ordered in honor of Amy Klobuchar.

Jay Inslee’s parting gift: A plan to save American farms