President Trump, these are the real reasons California is on fire 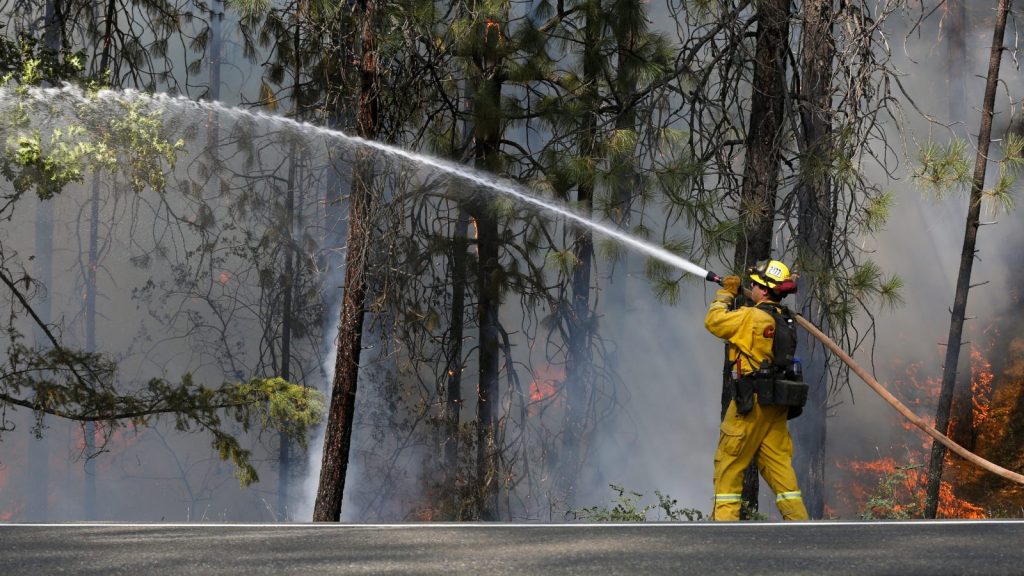 President Trump, these are the real reasons California is on fire

President Trump has finally weighed in on the California wildfires that began last month. But it wasn’t to express condolences for the victims or to praise the incredible bravery of firefighters — it was to try to score political points.

And he did so by badly twisting the science of how wildfires work. In a now-deleted tweet from Sunday, Trump blamed “bad environmental laws” for “diverting” water into the Pacific Ocean. On Monday evening, Trump reposted essentially the same tweet:

California wildfires are being magnified & made so much worse by the bad environmental laws which aren’t allowing massive amounts of readily available water to be properly utilized. It is being diverted into the Pacific Ocean. Must also tree clear to stop fire from spreading!

And he doubled down on this flawed argument.

Governor Jerry Brown must allow the Free Flow of the vast amounts of water coming from the North and foolishly being diverted into the Pacific Ocean. Can be used for fires, farming and everything else. Think of California with plenty of Water – Nice! Fast Federal govt. approvals.

State fire officials say they have all the water they need. On Wednesday, however, the Commerce Department ordered the National Marine Fisheries Service to disregard “any current agreements regarding the use of water in the areas of California affected by wildfires” to prioritize firefighting — effectively turning Trump’s ideas into law. It’s unclear how much water will be affected by the new rule.

According to the Los Angeles Times’ Michael Hiltzik, Trump’s tweets on wildfires and water “deserve some sort of award for most glaring misstatements about those two issues in the smallest number of words.” I’d have to agree.

In Trump’s muddled mind, there’d be “plenty of water” if California rivers were exploited to the point they were completely dry at the end of the line — like the Colorado River now is.

The conservative agriculture community in the state’s Central Valley yields a substantial clue to where this weird idea came from. In the minds of some farmers there, allowing even a drop for endangered fish habitat means the government is stealing their water.

Beyond cutting down forests as a fire management strategy (you can’t have fires if you don’t have trees!), Trump seems to argue for airdropping huge quantities of water from reservoirs onto fires.

Given that Trump drinks bottled water with both hands, he should know this fundamental fact better than most: Water is heavy. And it takes a lot of effort to lift it into the sky and drop it on wildfires.

California’s reservoirs are actually near long-term average levels right now. The state’s firefighting resources are vastly overmatched, and help is pouring in from across the country and around the world. There’s even a newly converted Boeing 747 that’s been airdropping flame suppressant.

And still, a tiny bit of rain would do incredibly more good than any amount of water that could be diverted from the state’s lakes and reservoirs by firefighters. A barely measurable sprinkle over the amount of territory that’s currently on fire in California is about 6,000,000 gallons of water — about what the 747 fire bomber could carry in 300 loads, a month’s worth of round-the-clock operations. It’s not water availability in reservoirs that limits the ability to fight these fires — it’s logistics.

The massive Mendocino Complex, now the largest wildfire incident in California history, is burning right next to Clear Lake, the largest natural lake in the state. Firefighters are using water from the lake as fast as they can to help fight the fire. The fire is just 33 percent contained. So no, Mr. President, the fact that water exists in the state does not mean that it’s very useful to combat a fire like this.

Letting rivers run their natural course is not what causes massive wildfires. It’s year after year of hot and dry weather that causes wildfires. And, it just so happens, there’s something we’re doing that’s making weather hotter and drier.

Decades of misguided fire suppression policy and booming urban development in forested areas have contributed to this boom, but the main reason for the surge is climate change. (Even California’s chief firefighter agrees.) For the president to deny the central role of climate change in what’s happening is not only foolish, it’s dangerous.

July was the hottest month in history for many parts of California, and burnable vegetation is off the charts. Longer, hotter dry seasons, combined with timber die-offs due to drought and temperature-related insect infestation, have turned the state into a tinderbox ready to explode.

After the state’s worst drought in millennia, the very wet winter of 2016-17 created loads of grasses and shrub growth — perfect kindling for wildfire now that the drought has returned. Temperatures this week have surged, particularly at nighttime, fanning the flames further and giving firefighters little time to recover. Smoke from the wildfires is detectable across half the United States, creating a public health nightmare that’s trapping people indoors.

This is already one of the worst years for wildfires in U.S. history, in a decades-long streak of increasingly really bad wildfire seasons. Four of the 10 most destructive fires in California history have occurred in the past 10 months. Together, these four megafires have burned nearly 10,000 structures. That’s a mid-sized American city’s worth of homes, gone.

So far this year, about three times more land area has burned than normal. The deserted Yosemite National Park is indefinitely closed due to the Ferguson Fire, the largest wildfire ever recorded in the Sierra National Forest.

And wildfires are going to get much, much worse in the years to come if we don’t radically reduce fossil fuel emissions. Instead, Trump’s anti-environmental policy moves, like stopping California from having stricter standards on automobiles, will worsen climate change. Trump’s proposed 2019 budget eliminates federal funding for wildfire research.

When Trump was elected, I said that the effects of his climate denial would linger for hundreds of years. That fear now seems to be coming true.