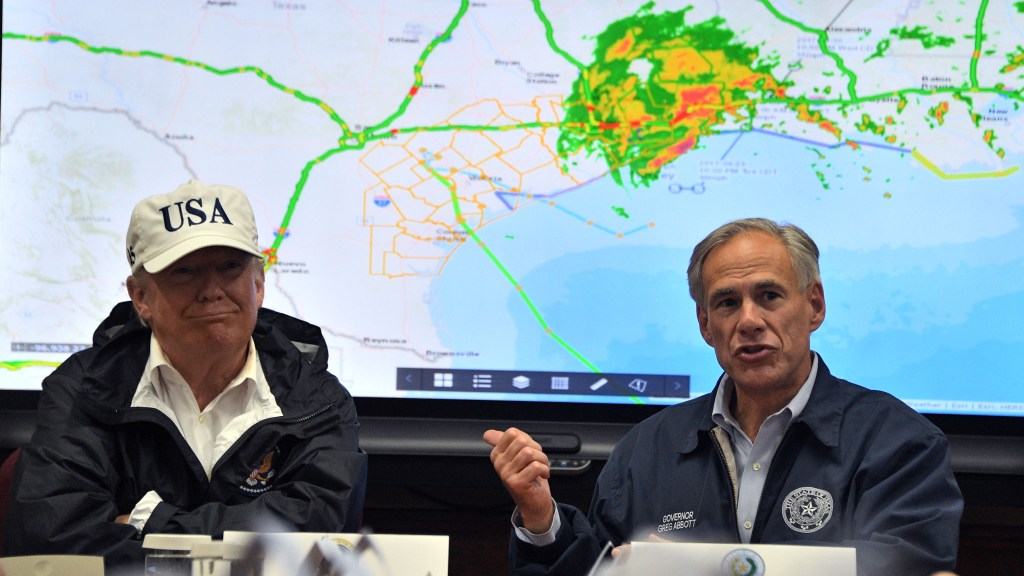 Texas Governor Greg Abbott speaks next to President Donald Trump in 2017, as rains from Hurricane Harvey continue to flood parts of Texas. JIM WATSON / AFP / Getty Images
Houston, we have a problem

A group of scientists affiliated with universities throughout Texas has offered to tutor the state’s Governor, Greg Abbott, on climate science.

Abbott, an established climate denier, dances around the subject so effectively that he’s helped introduce the term “future-proofing” into our lexicon. (It’s what he wants to do to prepare for storms like Hurricane Harvey — as opposed to, you know, climate adaptation.) Pressed by a reporter last month about the role of climate change in bringing about disasters like Harvey, he offered a well-worn denier turn of phrase: “I’m not a scientist.”

Okay. We can’t all be scientists. We can’t all be doctors, either. But when your doctor tells you what’s up, do you raise an eyebrow and say, “Well, I’m not sure there’s any way to know if what you’re saying is true.”

In a letter sent to Abbott on Tuesday, 27 Ph.D.s, professors, and researchers request the opportunity to brief their Governor on the science: “We, the undersigned, are climate scientists and experts, and can report to you that climate change is happening, it is primarily caused by humans, and it is having a devastating impact on Texas, including increasing deadly flooding resulting from Hurricane Harvey.”

The letter goes on to cite relevant data points from the recent National Climate Assessment, released late last year, and suggests that Texas, as one of the biggest wind-producing states in the nation, can play a key role in reducing emissions and avoiding climate disaster.

To borrow a phrase from the scientists: “The only thing missing is leadership.”