The Blacklist's Megan Boone has a new target: climate change 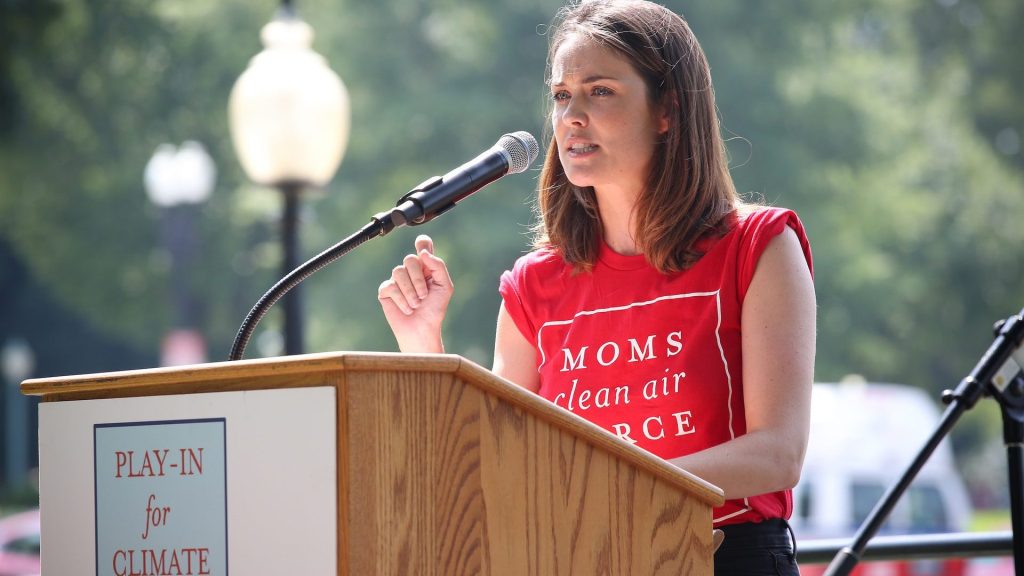 The Blacklist’s Megan Boone has a new target: climate change

Megan Boone doesn’t scare easily. Cast as a rookie FBI profiler alongside James Spader’s career criminal on NBC’s The Blacklist, the relative unknown quickly learned to hold her own in scenes with her more famous co-star.

But that didn’t stop her from feeling anxious on a hot day this July when speaking out about climate change. Boone took the podium for a Moms Clean Air Force rally in Washington, D.C., clutching a speech she had written herself — and hired a fact checker to examine for accuracy.

“I was very nervous, and it felt great!” Boone told me with a full-throated laugh, taking a break between shooting promos for her show’s fifth season, which premieres Wednesday night. “I haven’t been nervous in a long time, but public speaking is scary.”

So is going to graduate school while starring in a hit series. But after the birth of her daughter a year and a half ago, Boone felt the need to begin learning more, and doing more, to stop a diabolical real-world threat that’s far scarier than the criminal masterminds she chases on TV: climate change.

So she enrolled at Bard College to pursue an MBA in sustainability, starting classes this fall. She’s also selling her own line of organic onesies, called Caroline Agnes — combining the names of her real daughter and her fictional one — to benefit environmental causes. (The lawyers at Earthjustice are the first beneficiaries, with the Natural Resources Defense Council next on her list.) And she’s started surprising photographers by showing up for magazine shoots on her bike instead of in a black Town Car.

Boone talked with Grist about what drove her to embrace climate activism, the challenges of making her industry more sustainable, and navigating awkward conversations with her wealthy Republican family members back home in Florida. Our conversation has been edited for clarity and concision.

Q. I thought stars on hit TV shows worked on movie projects between seasons. But you’re getting a sustainability degree. To ask an Inside the Actors Studio-type question: What’s your motivation?

A. Well, I think my attraction to entertainment and storytelling, in general, came from that human pull toward the hero’s journey. And once I was exposed to the realities of what our culture was doing to us and to our future generations, I no longer felt like my life was in keeping with that journey, unless I moved toward being a leader in the shift toward a sustainable culture. It’s a developing field, so it’s being invented right before our eyes. And I’m interested in finding ways to contribute to that invention.

Every single day I’m cognizant of how the systems that surround me are not conducive with my ideology. But I can’t take full responsibility for those systems. None of us should. But all of us can and should take responsibility for creatively reinventing them. And that’s what I hope to do with my education.

Q. How are you able to juggle your studies with shooting a TV show? I mean, do you actually go to campus and sit in classes?

A. Partially. I do residencies once a month. So for three days, I lock myself in classrooms with others, and we learn. And then, twice a week, we have a couple of online classes back-to-back. And then, homework throughout the week, which is a really great occupation to have on-set. I find it really works with my life now.

Q. And do your professors and your fellow students know who you are? Is there some discussion of your outside life, or do you just feel like a student when you’re in class?

A. Only so much as there is a discussion about all of our outside lives — getting to know one another and talking about where we came from, what brought us to sustainability. Those stories are important, because if you’re going to be a leader in a cultural shift, you have to understand how you came to that consciousness. I think that me being on TV isn’t necessarily the most important thing to a group of people who are interested in saving humanity.

Q. You were very open in that Moms Clean Air Force speech about the fact that you’re relatively new to these issues. Did all of this really materialize for you when your daughter was born?

A. I really wanted to have a child, but that’s a tough call in this world where these realities face us. I had to say: “Well, life is not easy for any of us, right? We all struggle. Would I want Megan Boone to exist or not exist, despite that?” And I always landed on exist. I always wanted to live. And so I realized that no matter what happens to my daughter’s generation, her having that opportunity to have life was probably preferred for her. So I decided to go ahead and do that, and I’m so glad I did.

That’s at the heart of this issue for me. The thing about climate activism, is that it can often get so scientific, and nerdy, and hippie-dippie. And I’m not a scientist, and I’m not a nerd, and I’m not a hippie. That’s why I thought my voice was an important one to enter into this game, because we need it to be an emotional issue. It’s emotional. I’m about to cry right now. We don’t think it’s our lives, but people in Houston are starting to recognize that it’s our lives, too.

Q. And you’re from Florida, so do you have family or friends who might be impacted by Hurricane Irma? [Note: This interview was conducted before Irma made landfall.]

A. Yeah, it’s messing with my family now. But the lifestyle that my family — and all of our families in the western world, in the United States especially — has been living is what’s contributing to this. The United States in the past has shown this ability to come together and make personal sacrifices for the greater good of our country, and now it’s time to do that for the world.

But the problem is we’re in this national depression, and maybe it’s because it’s the decline of an empire, but we are not mobilizing in the same way that we once did. So while I don’t see that happening, I’m going to continue to encourage that when I can, with my platform.

Q. Your late grandfather developed a huge Florida retirement community and supported a lot of Republicans, including prominent climate deniers like Florida Governor Rick Scott. Has that informed your activism or made for awkward family conversations?

I don’t see the issues that we’re facing as partisan issues, because I have family members that I love who have gone further into neo-conservative values than I think is necessarily healthy for the country. I still recognize what is virtuous about their value system, and how their value system could benefit us moving forward. And I think it’s short-sighted to be too aggressive or too extreme on either side of the aisle.

Q. I’ve noticed that Katharine Hayhoe (a conservative Christian climate scientist) is somebody who you follow on Twitter and reference a lot. I imagine she’s someone you relate to, due to the family similarities?

A. She’s been an important person in my life. She gave me some very good advice. I first saw her when watching the Showtime series Years of Living Dangerously. And she came on the screen, and I thought: “I need to know this woman.” And I reached out because it was hard for me always to find that balance, and to learn how to communicate well with people. That’s the thing about this: It challenges you as a human being because this is such a necessary social adaptation that we’re undergoing. So I do take responsibility for growing socially.

Q. When you look down the road, after you get your sustainability degree, do you think you would ever go from actor to full-time activist?

A. Well, right now, I do both full-time. I think what we have to do to move towards sustainability is that people who have a toehold in industry have to keep that toehold while shifting that industry. So my interest is in using my established career to create rapid change in sustainability within mass media production.

Right now, the infrastructure just isn’t there. But I have a vision for how this industry could be something that is not only sustainable, but regenerative. What I can do is just take care of my little corner of the world as much as possible. I think the responsible way to live your life is not to say, “Oh well, it’s the end of the world. Let’s party!” I think it’s important to live a meaningful life despite that, and that’s what I’m trying to do.