The Pacific Northwest is proving that grassroots action against the fossil fuel industry can work, and the strategies they’re using can be used anywhere.

The region has seen a tsunami of fossil fuel infrastructure proposals in the last few years — from coal export, oil-by-rail, liquefied natural gas, and more.

“And what we have seen happen, very much to everyone’s surprise, is that local grassroots opposition stopped every single project they fought against,” said Eric de Place, Sightline Institute’s policy director on energy policy. Sightline Institute is a sustainability research and communications center in the Pacific Northwest.

“The fossil fuel industry may dominate in Congress, but we crush them at the local level,” de Place said. “I think it’s a tremendously powerful technique.”

That opposition at the local level was summed up by 1 million comments — all from a public opposing new fossil fuel infrastructure projects in their communities.

The comments were delivered to Washington Gov. Jay Inslee on May 11 by a coalition of groups in the Pacific Northwest, signaling that grassroots organizing against those projects will only increase under President Donald Trump.

“There is definitely an increased sense of urgency, and we’ll get more aggressive,” said Rebecca Ponzio, fossil fuel campaign director at Stand Up to Oil, a coalition of groups opposed to new oil terminals and any increase in oil transport through the Northwest.

Stand Up To Oil delivered the comments to Inslee, and said they represent a growing environmental consciousness in the Northwest.

“I think what we’re seeing is that more and more people see themselves as part of the solution and are motivated to be engaged,” Ponzio said.

At least 20 projects have been proposed in Oregon and Washington that would have handled or moved coal, crude oil, methanol, propane, or LNG. By targeting the projects at the local level, organizers showed their communities’ opposition to the new fossil fuel infrastructure and convinced city authorities to deny the necessary permits.

“We’re seeing that place by place, these communities targeted for fossil fuel exports, they say ‘well look, ultimately the authority rests with us to decide whether or not to give you the permits — we can just say no,’” de Place said.

Northwest residents continuing to fight these projects through grassroots organizing is “what is going to keep democracy alive,” Ponzio said.

It’s not just your typical environmental activist participating in opposing these projects either, she said.

When the 1 million comments were delivered to Inslee in May, Stand Up to Oil’s event featured a commercial fisherman, a tribal elected official, a longshoreman union member, a local businessman, and an organizer focused on immigrant communities — showing the diverse coalition that is opposed to new fossil fuel infrastructure in the Northwest.

Nearly half of the comments delivered to Inslee were from people opposed to a proposed coal terminal in Longview, Washington.

In January, the project was denied an important lease, and the project has stalled after its final Environmental Impact Statement found the project would significantly increase greenhouse gas emissions and disproportionately impact low-income and minority communities near the site.

An oil-by-rail terminal proposed in Vancouver, Washington, by NuStar was denied in March.

Bakken oil is extremely flammable, and was responsible for the explosion in Lac Megantic, Quebec, which destroyed the downtown and killed 47 people. The same type of oil was being carried when a train derailed in Mosier, Oregon, last year.

Proposed oil-by-rail projects have attracted wide opposition because there are so many communities along the rail route that would be impacted before the oil even reached the facility.

“We’ve had thousands show up for public hearings and over 300,000 comments opposing [the project in Vancouver] submitted through the public comment period,” Ponzio said. 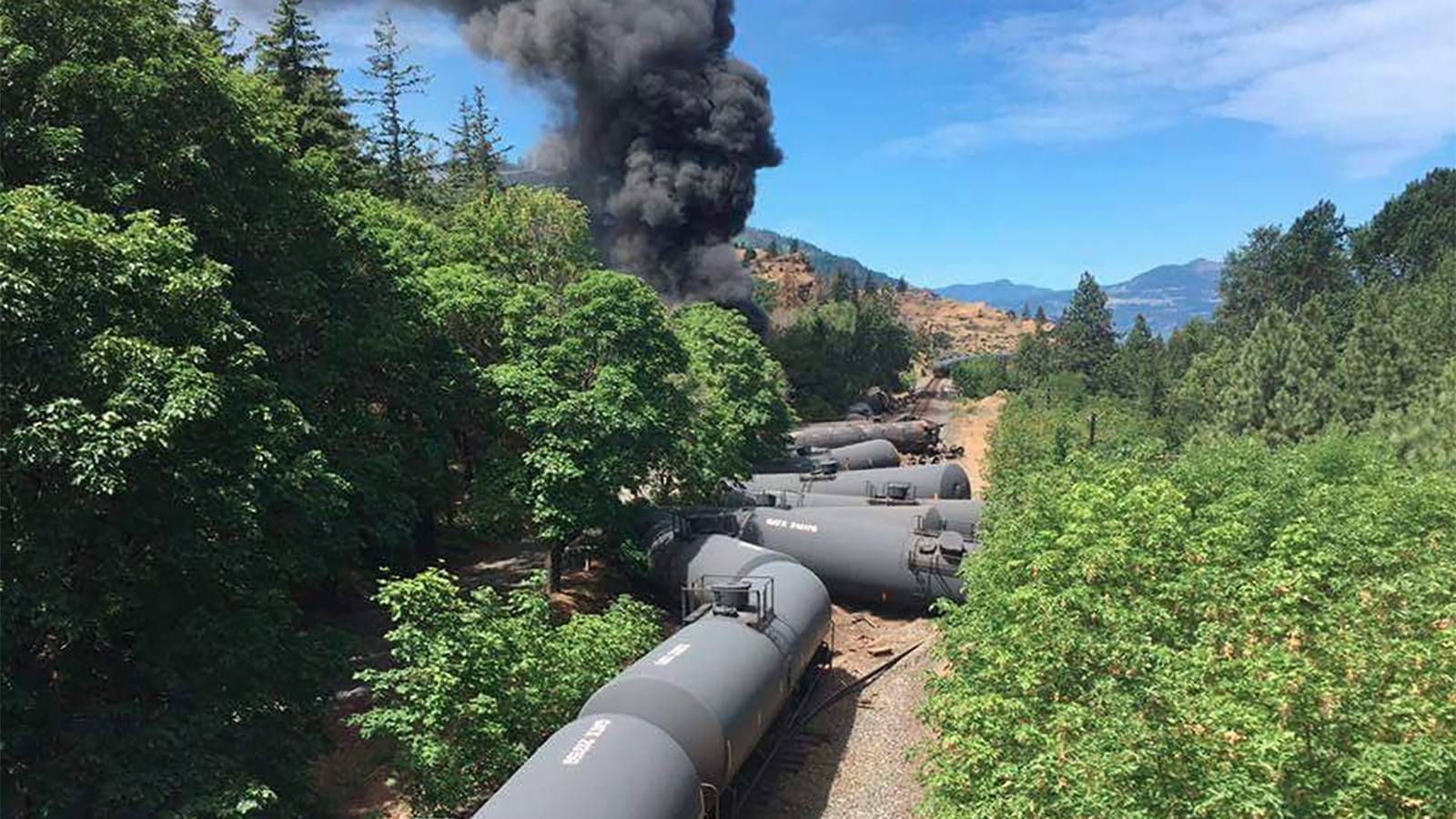 This type of grassroots organizing is also being seen outside of the Northwest. Organizing against oil-by-rail and coal has also been ramping up in California and the Northeast, de Place said.

“My continued belief is the more the Northwest wins in opposition to these projects, the more it’s going to spread,” de Place said. “I think we’ll see that intensify under Trump.”

Another method to stop these projects is supporting tribal nations treaty rights, and following the tribe’s lead in that work is also important to the coalition, Ponzio said.

Washington’s Lummi Nation led grassroots organizing and protests until the Cherry Point coal export terminal proposal was rejected. Some 124,000 public comments opposing the project were also a factor in its demise, Ponzio said.

De Place called it “by far the most assertive anti-fossil fuel ordinance in the country,” and added that Hoquiam, Aberdeen, and Vancouver, Washington, have also passed changes to zoning laws that prohibit the construction of crude oil infrastructure.

Despite the Northwest’s broad opposition to new fossil fuel infrastructure and success in stopping many of those proposed projects, the climate under Trump has activists still on high alert.

An LNG export terminal in Coos County, Oregon, denied by federal regulators in March 2016 has been resurrected — with the company refiling and the Federal Energy Regulatory Commission, which initially denied the Jordan Cove LNG project and a 232-mile pipeline, allowing developers to resubmit their application.

Last month, a measure that would have stopped the plant was rejected by Coos County voters. Opponents of the measure drastically outspent supporters of the ban, raising over half a million dollars that went towards defeating the ban.

“All signs from the Trump administration point to the desire to increase fossil fuel extraction and at all costs to the community members, to our waterways, to our economy,” Ponzio said.

The president has also decided to withdraw from the Paris deal — the global treaty aimed at averting the worst effects of climate change.

In response, Washington Gov. Jay Inslee and other states helped form the United States Climate Alliance. Ten states have already joined the alliance — including Oregon — and have committed to achieving the U.S. goal of reducing emissions 26–28 percent from 2005 levels and adhering to the targets of the federal Clean Power Plan created by former president Barack Obama.

The fight to address climate change will continue at every level in the Northwest, from the individual, to the city and state levels, Ponzio said.

“It just feels even more important, and we want to make sure community members across the spectrum know how to get engaged and make an impact with their voices — because it does,” Ponzio said.

Slugging it out with a new contender in the GMO debate