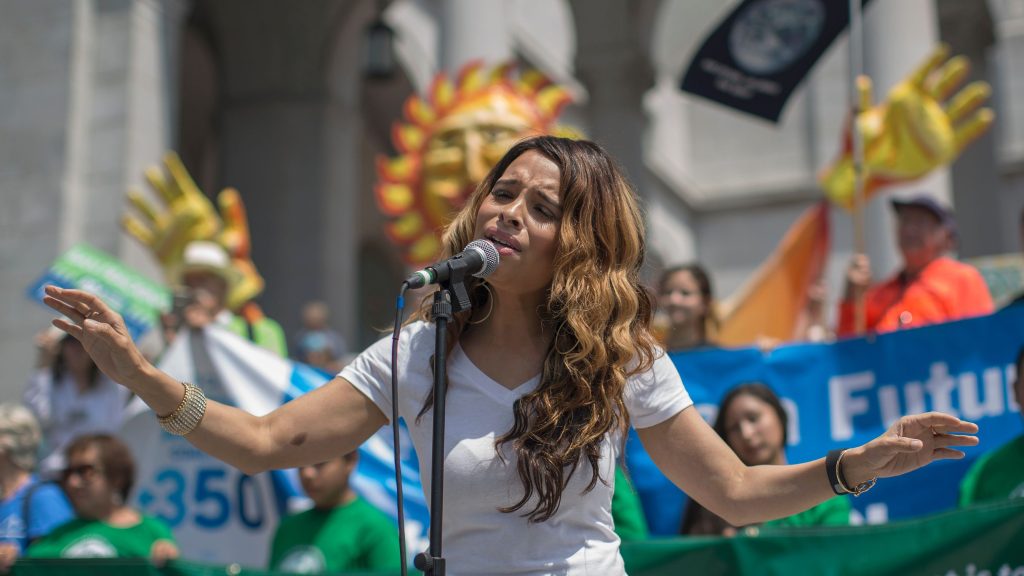 Singer and actress Antonique Smith performs the Beatles' "Here Comes the Sun" during the March to Break Free from Fossil Fuels on May 14, 2016 in Los Angeles. David McNew / AFP / Getty Images)
opinion

Wednesday marks the beginning of the Global Climate Action Summit in San Francisco, and the stakes are higher than ever. Fossil fuel emissions and spills threaten our air and water. Pollution is contributing to rising rates of asthma. We’re experiencing stronger storms and flooding, record heat and drought, and massive wildfires. People are dying, and communities of color, indigenous peoples, and poor communities — what I call “the sacrifice zones” — suffer disproportionately.

These are just the immediate challenges we face. When we consider the long-term effects of climate change, science says our existence on this planet is in jeopardy: Earth will keep spinning, we just won’t be on it. I don’t know about you, but that doesn’t sound like a viable option to me.

But neither fear nor the on-the-ground reality of a warming Earth has motivated people to truly transformational action. That’s why I sing.

I am an “artivist.” I use my art to effect change. I am an actor and singer, and I use my voice to sing about the issues we’re facing and the solutions to them. I sing to open people’s hearts to the truth and inspire them to action. But I’m not the first to do this.

Not long ago, I had the pleasure of recording Marvin Gaye’s “Mercy Mercy Me” for “H.O.M.E. (Heal Our Mother Earth),” an album about climate change recorded and produced by People’s Climate Music, a project started by the nonprofit Hip Hop Caucus. Before recording the song, I had no idea how radical Marvin’s words were: “Poison is the wind that blows;” “oil wasted on the ocean and upon our seas, fish full of mercury;” “radiation underground and in the sky.” He was prophetic!

And last year, I recorded a cover of the Beatles’ “Here Comes the Sun.” While the Fab Four never intended to write a climate anthem, their hit seems a perfect song for our time. Bill McKibben, famed climate activist (and Grist board member), asked that I learn it, and it is now my ode to the power of solar energy.

I’ve sung these songs everywhere—from small rallies and town halls; to the National Mall in Washington, D.C., when the Pope visited in 2015; to New York City’s Times Square on New Year’s Eve. I perform because I feel the need to do all I can to inform and inspire people to join the movement—and that includes influencing them through the arts.

I am inspired by artivists like John Legend, who, along with Common, won an Oscar for their song “Glory,” an uplifting civil rights anthem; Lady Gaga, who has campaigned fiercely against fracking and whose songs have supported the movement for LGBTQ rights; Ava Duvernay, who directed the powerful documentary “13th” to shed light on America’s prison problem; and actor Lena Waithe, who appears in the Netflix show “Master of None” and has written compelling scripts about her experience as a queer black woman.

But we need more people who make thought-provoking, riveting content to energize their peers against polluters (and the policymakers who protect them). Unfortunately, artivism isn’t an occupation; it requires serious financial support. Not all artivists have careers as successful as John Legend or Ava Duvernay, most need to pay their bills. Like my friend, actor Mark Ruffalo, once said at a climate event, “Fund the fighters!” Resources are key to affecting real change. I am lucky to not only be able to sacrifice my time to this cause, but to also have colleagues and friends, like my manager Darryl Farmer, who support me and my passion.

On Wednesday, California Gov. Jerry Brown will host leaders from across the country and around the world in San Francisco for a vital summit to celebrate “states, regions, cities, companies, investors, and citizens” that are taking action against climate change.

I will be there, along with other artivists. As a member of Hip Hop Caucus, I will co-host “Our Village,” a convening of global leaders and community innovators for a discussion of underrepresented communities and those oppressed by systemic injustices, racism, poverty, and inequality. I’m also involved in another Hip Hop Caucus project, the “Think 100%” podcast, where I interview other artivists about the intersection of climate change and culture. My co-hosts, Rev. Lennox Yearwood Jr., Mustafa Santiago Ali, and I will be conducting a live taping of our show at the summit.

Singing, art, and action are all critical to protecting our climate—but love is, too. I believe it is the most powerful force in the world and the key to countering the damage done by selfishness and greed. My album “Love Is Everything” embraces the message that love can be a powerful change agent, not only for one’s self but for the climate, as well.

I am proud of the work I have done as part of this global climate action movement, and I will not stop until I’ve opened the hearts of the world. We will win this war. We have no choice.

Antonique Smith is a Grammy-nominated singer, actress, and 2018 Grist 50 honoree. She stars in season two of the Netflix series Marvel’s Luke Cage and co-hosts the podcast Think 100%.