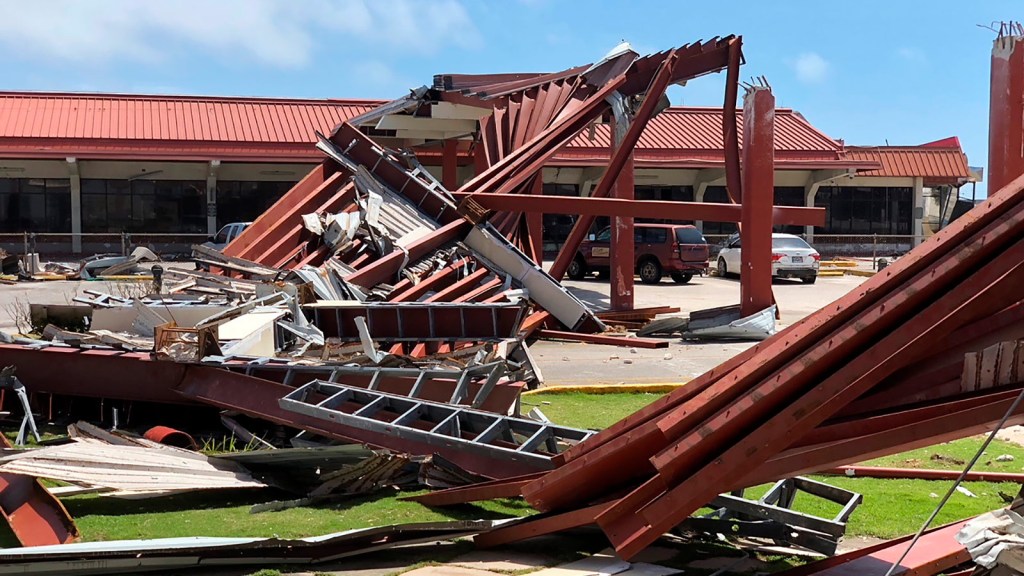 Far away from the mainland, American citizens are reeling from a direct hit by Super Typhoon Yutu.

During its landfall on Thursday, Yutu lashed the Mariana Islands with more than a foot of rain, coastal flooding in excess of 15 feet, waves the size of five-story apartment buildings, and winds of 180 mph.

Saipan and Tinian are the two most-populated islands of the Commonwealth of the Northern Mariana Islands, a U.S. territory in the central Pacific Ocean about 8,000 miles from Washington, D.C. — nearly twice as far away as Honolulu. Both islands took a direct hit. About 50,000 people live in the Commonwealth, and after Yutu, they’re fighting for survival.

Most structures have lost their roofs, and even the leaves have been stripped from trees and bushes, local lawmaker Edwin Propst told the Associated Press. Closed circuit video from near the point of landfall showed an entire hotel lobby destroyed in seconds.

This is captured by the hotel cameras. The hotel is Coral Ocean Point, located on the south side of the island of #Saipan where you find most of #SuperTyphoonYutu #yutu destruction. pic.twitter.com/yFHeORDY8T

Just hours after landfall, local news reports said that food, drinking water, and fuel were already in short supply. “This damage is just horrendous, it’s going to take months and months for us to recover,” Propst said.

If recent history holds, he’ll be right. Yutu is the third tropical cyclone (the scientific term for typhoons and hurricanes) in just over a year to plunge a remote U.S. territory into humanitarian crisis. Last year, Hurricane Irma’s devastation in the U.S. Virgin Islands was eclipsed just days later when Hurricane Maria made a direct hit in Puerto Rico.

In historical context, Yutu is an exceedingly rare disaster, though storms like Yutu are coming with a worrying frequency these days. According to preliminary weather data, Yutu is tied for the fifth-strongest tropical cyclone ever to hit land. Six of the 10 strongest landfalls in world history have occurred this decade.

The United States has borne a particularly damaging share of horrific storms lately. Yutu is the fifth Category 4 or 5 tropical cyclone to make landfall in the past 15 months on U.S. soil. No previous decade has had more than four such strikes on American shorelines, making this an outbreak unseen in nearly 170 years of recorded weather history.

Like so many recent hurricanes, Yutu rapidly strengthened just before landfall, going from a Category 1 to a Category 5 in just 36 hours. Waters near Yutu were 2 to 3 degrees Fahrenheit warmer than normal, consistent with the effects of climate change and a key factor in rapidly strengthening storms.

From nothing to one of the world's strongest storms.

Despite signing an emergency declaration to help speed the flow of federal aid to the islands, a routine task for a storm of this magnitude, President Trump has yet to publicly comment on the disaster. Mainstream media coverage has also been sparse; The New York Times’ initial story ran on page 16.

“It’s been tough seeing the lack of mainstream coverage for this,” said Steven Johnson, a native of Saipan and marine biologist now studying climate change at Oregon State University, wrote in an email interview with Grist.

Johnson pointed to the round-the-clock coverage of the mail bombs sent to Trump critics in comparison. It “hurts to know that +50K people living on U.S. soil deserve a fraction of the attention of Robert de Niro,” he said.

A lack of media and federal attention could prove deadly in the Marianas, as it did in the aftermath of Maria in Puerto Rico. Despite convincing evidence of a humanitarian catastrophe in Puerto Rico, the federal response was slow. That official neglect, plus logistical bottlenecks, lead to a nearly total breakdown in medical services and contributed to the storm’s outsized death toll, according to an independent study.

Johnson has been trying to bring attention to the storm by tweeting to celebrities like Leonardo DiCaprio. He said that communicating with friends and family over social media had turned into a full-time job.

“Growing up on Saipan and Tinian, you go through storms all the time,” Johnson said. “This was the first time I’ve heard family and friends say they feared for their lives.”