What do firefighting chemicals do to a forest? 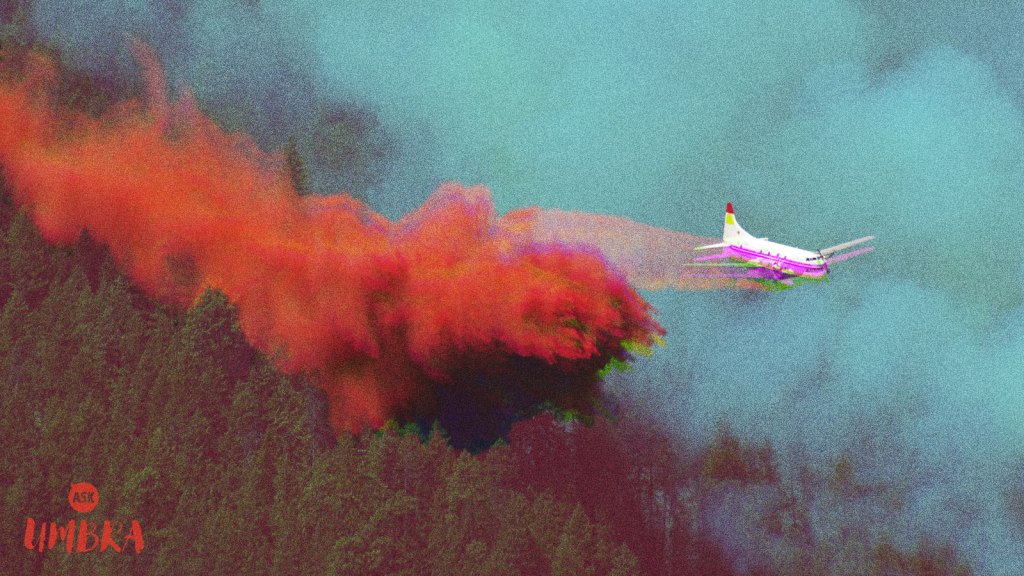 What do firefighting chemicals do to a forest?

What is Phos-Chek, the red stuff the fire department drops on fires? And what does it do to the land when the fire’s out?

— Bothered by Unintended Results in Nature

I’m sure a lot of people are wondering this! Every wildfire season, it seems like there’s a slew of photos of planes dropping red clouds of some sinister material over smoking forests and the headline is something like: “THE APOCALYPSE IS NOW.” And sure, it looks bad, but there has to be a more mundane explanation than the second coming of Jesus, right?

And there is. Basically, the red stuff sold under the brand name Phos-Chek is something called a fire retardant. In extremely basic terms, that means you spray a bunch of it all over stuff that is likely to burn — trees, plants, your house — that you don’t want to burn. Well, you usually don’t spray it; it’s used primarily by firefighters, who usually disperse it by plane to create barriers to advancing flames. It’s a mixture that’s mostly water, about 10 percent commercial fertilizer like ammonium polyphosphate, and a soupçon of undisclosed thickeners and dyes.

I’m not going to pretend to fully understand the mechanism through which the following happens, but basically the ammonium polyphosphate reacts with the cellulose in plants and wood so that it releases water vapor as it heats up, creating a lower-temperature burn that’s less prone to flaring and expanding.

So when that process happens, does that have unhealthy effects on forest ecosystems? That question starts us down a complicated path that leads to an ethical meditation on the relative value of human lives, so buckle up, buttercup.

There are a fair number of risk assessments out there examining the impact of fire retardants on ecosystems — however, not a lot of them offer clear answers. According to a 2017 risk assessment by the U.S. Forest Service, the chemical composition of the retardant itself is considered to be negligibly toxic. In other words, you shouldn’t take a bath in it, but if you breathe some in you probably won’t suffer much adverse effect. Its impact on vegetation is kind of a shrug, according to that assessment.

An older U.S. Fish and Wildlife Service biological assessment of the impact of fire retardants takes a much more conservative approach, noting that the “richness” of plant life in parts of North Dakota has been shown to suffer after contact with firefighting chemicals. By weakening certain plants, spraying can actually encourage the spread of invasive species or beef up already robust invasive plants.

The one big risk that everyone appears to agree on is that fire retardants are really no good for fish and other aquatic wildlife. It’s been observed to kill off salmon and other fish populations in streams after a spray, which is no small deal when salmon in particular are considered quite vulnerable all across the West. Since the impact of fire retardants on waterways is no secret, firefighters are instructed to avoid spraying streams and rivers.

But this isn’t a particularly realistic instruction. If you’re flying over a forest blooming in smoke, how are you supposed to see the narrowest little burbling creek? And what about fire retardants that leach from the land into streams?

Now we’re starting to get into the question of what gets valued in an ecosystem. At least in the United States, humans and their property tend to take top priority; that’s why “human impacts” are often differentiated entirely from “ecosystem impacts.” Then there are economic assets, like timber — if a forest burns up, you’ve lost a valuable commodity.

Yet another study, from the University of the Aegean (in Greece!), notes that “in a high-value and high-hazard forest, unlimited use of fire chemicals may be justified to control a catastrophic wildfire.” However, “Where conservation of natural ecosystems is of prime concern, use of fire retardants may be conditional, and sometimes, entirely unacceptable.”

In other words, fire retardants are generally used to protect assets. If you cared purely about the ecosystem, especially in the West, you’d just let it burn.

That may seem counterintuitive, but forests in the western U.S. have grown and thrived on regular fires for millennia. Until white settlers barged in about 150 years ago, Native American tribes used prescribed burning to keep the forests they lived with and depended upon healthy. The new regime of forest management policies emphasized preventing and suppressing fire at all costs, in no small part to protect the stores of timber that were being used to develop the nation.

Kari Marie Norgaard, a sociologist at the University of Oregon, has researched and written extensively on how these policies of “fire exclusion” have impacted the Karuk tribe that lives around the Klamath River in her home state. Norgaard estimates that three-quarters of the species that the Karuk depend on for food and cultural purposes benefit from regular fire. Stream-dwelling fish, like salmon, are a huge part of Karuk life; to the extent that the loss of salmon populations is linked to real despair and social devastation in the Karuk community. In that sense, at least, the effects of fire-retardant spray on fish stocks are a real blow to the tribe.

“Most Americans — at least, most people who are making policy — are operating with a flawed understanding of ecology,” Norgaard told me over the phone. “There’s this idea that nobody lives in wilderness, nobody uses it. And in some parts of the country, that’s true. But certainly in areas like the Klamath, people are eating and getting drinking water out of the forest. And these fire retardants aren’t tested for drinking water standards, for example.”

The reality is that, in western states in 2019, there are communities living up against each other with directly opposing needs. Fire retardants are valuable tools to protect people who live in and next to forested land, but they can also threaten indigenous communities that depend on the “normal” functioning of the forest. I put “normal” in quotes not to be cheeky, but because the meaning of the word has changed enormously after a century or so of fire suppression. Forests are overgrown and overfull of fuel for an errant spark, transforming what would have been a standard blaze 200 years ago into a devastating inferno.

So, how do you decide whose needs are met? It goes without saying that non-Native communities have been prioritized in policy for, well, the entire history of this country. But does that mean that their homes and communities should now be allowed to burn? It’s really not an easy question!

You asked a straightforward question, and I made it really complicated, and I’m sorry. But there are SO FEW questions related to climate change that have an easy answer! And I’d rather embrace the nuance than tell you something disingenuously simple.