What will be left when we're gone? Bones, plastic, and radioactive waste. 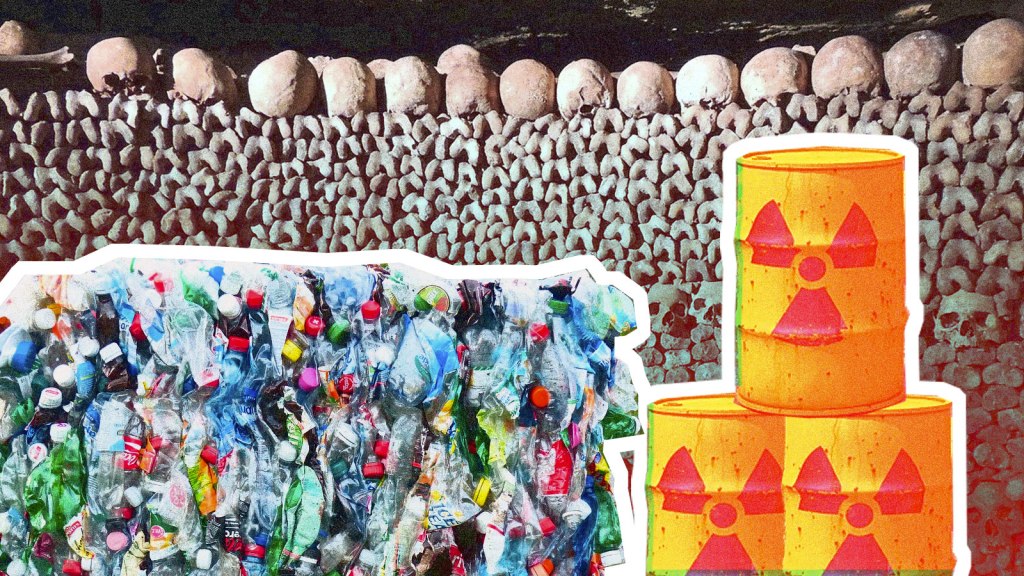 What will be left when we’re gone? Bones, plastic, and radioactive waste.

Millions of years from now, what will be left of us?

At the rate we’re going, nature might well have taken over. Moscow and Mumbai will be sand and gravel cast across the desert expanse; New York City and Amsterdam will be sediment on the ocean floor, softened by the unrelenting tides.

But beneath the Earth’s surface, preserved in bedrock, some of the structures that supported life aboveground might still be intact: subways, quarries, and sewage systems. To piece together the story of our species, a hypothetical archaeologist might have to hunt for clues underground, much as today we dig for fossils to learn about the past.

This is what’s on Robert Macfarlane’s mind before falling asleep in a chamber deep in the catacombs beneath Paris. In his new book Underland: A Deep Time Journey, the British nature writer takes an underground adventure, climbing into the crevasse of a Greenland glacier, visiting a nuclear waste containment site in Finland, peering into gruesome sinkholes in the Slovenian highlands, and exploring the chambers and tunnels underneath Paris filled with bones from the city’s overflowing cemeteries.

Through this series of haunting descents, Macfarlane plumbs the strange and alarming ways we’ve changed the world and resurfaces with revelations about how to orient us to the future, weaving landscape and language together. “As a species,” he writes, “we have proved to be good historians but poor futurologists.”

Writers have generally avoided these kinds of places for good reason. They don’t exactly make for pretty scenes. “It’s dark, it’s dangerous, it’s smelly, it’s where we dispose of our waste,” Macfarlane told me during a recent visit to Seattle. “So the payoffs are quite niche.”

For those of us who spend our days thinking about life on the surface, his new book is brimming with surprises. Macfarlane visits a laboratory in a giant potash mine underneath the North Sea where physicists are looking for evidence of dark matter, the mysterious substance that makes up a big chunk of our universe. They hope to find evidence of “ghost particles” in one of the quietest places on Earth, insulated from the noise of aboveground life.

The underground world is a new focus for Macfarlane — his first book in 2003, Mountains of the Mind, aimed quite a bit higher. But like his previous works, Underland reflects his deep fascination with the natural world and the words we use to describe it. In 2015, he made the case for salvaging nature words that are vanishing in regional dialects throughout the United Kingdom in Landmarks. His bestselling book The Lost Words: A Spell Book, from 2017, uses vivid vocabulary to get kids (and adults) interested in flora and fauna. (There’s smeuse, a hole in a hedge or wall left by a small animal, and fizmer, the sound that wind makes when it rustles through the grass, alongside more common words like willow and newt.)

Underland alternates between nail-biting moments and grand reflections on life and language in our time of climate crisis. At one point, Macfarlane is worm-wriggling through an impossibly narrow tunnel in the Paris catacombs, pulling his bag along with his foot, when the cracked stone ceiling sagging above him starts to rumble from a Metro train thundering above.

At another, he ponders how grammar and syntax shape our perceptions of life on Earth and the things that support it. “Words are world-makers — and language is one of the great geological forces of the Anthropocene,” he declares.

That term Anthropocene, the geological era brought to you by human activity, has been thrown around since the 1980s. It picked up steam in the early 2000s when it was heralded by Paul Crutzen, a Nobel Prize-winning atmospheric scientist. But the buzzword is controversial among geologists, who can’t agree on when the epoch began or criticize the concept as more “pop culture” than real science.

Some environmental communicators are suspicious of the name too. “It generalizes the blame for what is a situation of vastly uneven making and suffering,” Macfarlane writes. “The rhetorical ‘we’ of Anthropocene discourse smooths over severe inequalities.” But he uses the word anyway because he’s seen the idea that humans have made a geological mark shock people, a legacy of plastic trash and radioactive waste with a half-life of 700 million years. We’ve blown up entire mountaintops and even created a new type of rock, plastiglomerate (it’s just what it sounds like — plastic fused with rock). The Anthropocene, Macfarlane said, “is an unsatisfactory term for a devastating time.”

It’s part of a broader question about how to talk about climate change (or, as Macfarlane and some others call it, climate breakdown.) “We do lack a basic language for what’s happening around us,” Macfarlane said. He uses the term thick speech, coined by Sianne Ngai, a cultural theorist, to describe our stuttering attempts to articulate the species, places, and lives we’re losing. The climate crisis is pretty depressing and hard to talk about, and many people avoid the topic entirely.

If getting people engaged with nature is a challenge, finding them a suitable vocabulary for the breakdown of the planet’s systems is, well, formidable. So-called thick speech, this muddiness and hesitancy we encounter when trying to talk about the Anthropocene, is one reason why it took Macfarlane the better part of seven years to write Underland, which spans more than 400 pages.

“It’s receiving responses like nothing I’ve ever written before, and I think that’s because it has this sort of resonant urgency to it,” Macfarlane said. That sense of urgency around the climate crisis is echoed in other books and shows from this year, like Netflix’s Our Planet and David Wallace-Wells’ The Uninhabitable Earth.

Macfarlane says he strives to find creative and accurate language to describe the natural world. He points out that a “glacial pace” used to mean movement so slow it was almost static, but today’s maps can’t keep up with how fast the ice is shrinking. Macfarlane visits Greenland during what one sailor calls “the year of no ice,” reminding him of the Old English term unweder (unweather), “weather so extreme that it seems to have come from another climate or time altogether.” The book is filled with efforts like these that seek to adapt our idioms and vocabulary to a changing world — and force us to confront the legacy we’ll leave on the planet.

While we have abbreviations for marking out earlier eras like B.C., and geologists have BP for “before present” or MYA for “million years ago,” Macfarlane observes that we don’t have equivalent abbreviations for the future. “No one speaks of ‘AP’ for ‘after present,’” he writes.

Still, there are some folks out there thinking about the message we’re leaving for the inhabitants of the far-future Earth. The Waste Isolation Pilot Plant in the New Mexico desert, one of the world’s deepest nuclear waste repositories, is set to be sealed in 2038, with the hope that it’s never opened. The U.S. Department of Energy is working to create a warning system that could survive for at least 10,000 years, which would warn of the danger buried within to whatever future being might encounter it. That’s harder than it might sound: There’s no universal communication system to spell out even the relatively simple concept “Danger! Radioactive Waste!”

The Energy Department enlisted the help of all sorts of experts — anthropologists, architects, linguists, sculptors, astronomers, even graphic artists — to design a system to deter intruders. The chambers and entrances will be backfilled, then sealed with 30 feet of rock, tamped earth, and salt. Pillars of granite and discs made of various materials will be engraved with warnings not to dig or drill. A domed map will also mark all of the world’s biggest radioactive burial sites, with an obelisk that indicates “You Are Here.”

If a mysterious future entity ends up at this spot, it’s hard to know what they might think; we can only hope they don’t take it as a challenge, picturing treasure rather than trash inside. And garbage, for sure, will be one of humanity’s biggest gifts to the future.