For cities in the United States, the price of infrastructure projects to combat rising seas and intensifying storms is coming into focus — and so is the sticker shock.

In Boston, where many neighborhoods have been built and recently expanded in low-lying areas, an estimated $2.4 billion will be needed over the next several decades to protect the city from flooding, one study says. That report came as the city abandoned plans to build a harbor barrier that would have cost between $6 billion and $12 billion, which researchers concluded was economically unfeasible.

In Charleston, South Carolina, the mayor said last year that the city, which floods regularly during high tides, had an estimated $2 billion in needed drainage projects.

In Norfolk, Virginia, the Army Corps of Engineers has recommended a $1.4 billion series of seawalls and other infrastructure to protect part of the shoreline. As with many cities, that’s just the start.

In Harris County, home to Houston, planners say $30 billion is needed to provide protection against a 100-year flood. Hurricane Harvey, which in 2017 caused 68 deaths and $125 billion in damages in the state, was the city’s third 500-year-flood in three years.

And in New York City, Mayor Bill de Blasio has proposed a storm surge barrier and floodgates to shield parts of the city and New Jersey from rising waters. The estimated cost: $10 billion.

While the threats to these cities are growing as climate change intensifies, what is not clear is how to pay for projects needed to protect tens of millions of people and trillions of dollars of property. Conservative estimates of the capital investments needed to combat rising seas and worsening storms run into the hundreds of billions of dollars in the coming decades.

“The failure to face these costs is the next phase of climate denial,” says Richard Wiles, executive director of the Center for Climate Integrity, an environmental advocacy group that champions forcing polluters to pay for climate crisis costs. “We’ve got to look at this squarely and figure out how to pay for it.”

The center recently issued a study concluding that by 2040, building sea walls for storm surge protection for U.S. coastal cities with more than 25,000 residents will require at least $42 billion. Expand that to include communities under 25,000 people and the cost skyrockets to $400 billion. That’s nearly the price of building the 47,000 miles of the interstate highway system, which took four decades and cost more than $500 billion in today’s dollars.

The research is a rough yardstick because it only considers sea walls, not other ways to mitigate flood risk including buying out homeowners and improving storm water systems. “It’s a deliberate underestimate,” Wiles adds. “We know it will cost more — a lot more.”

The report says that Florida, with an estimated $76 billion in costs, is the state with the largest exposure, followed by Louisiana, North Carolina, and Virginia. A key issue as different jurisdictions and the federal government grapple with how to pay for this infrastructure is equity. Wiles and other experts say that while some of the bigger, richer cities may figure out how to finance their needs, smaller communities will face huge challenges funding resilience projects. “We think this is an emerging crisis for most of these communities,” he adds. “A very simple way of thinking about it is that it will be tens of thousands of dollars per resident in places that may not have a large tax base.”

For comparison, Wiles notes, protection for Jacksonville, Florida, would cost $3,990 per capita, while in New York the cost would be $231 per capita. Outside cities, the price per person jumps dramatically to $37,366 in Cumberland County, New Jersey, and $154,747 in Dare County, North Carolina.

Globally, the question of equity is even more acute, with cities in developed nations far better able to fund climate change adaptation projects than in developing countries. “In an environment of scarce resources for local authorities, especially in poor countries, mobilizing such resources will be a real political and institutional challenge,” according to a World Bank study. 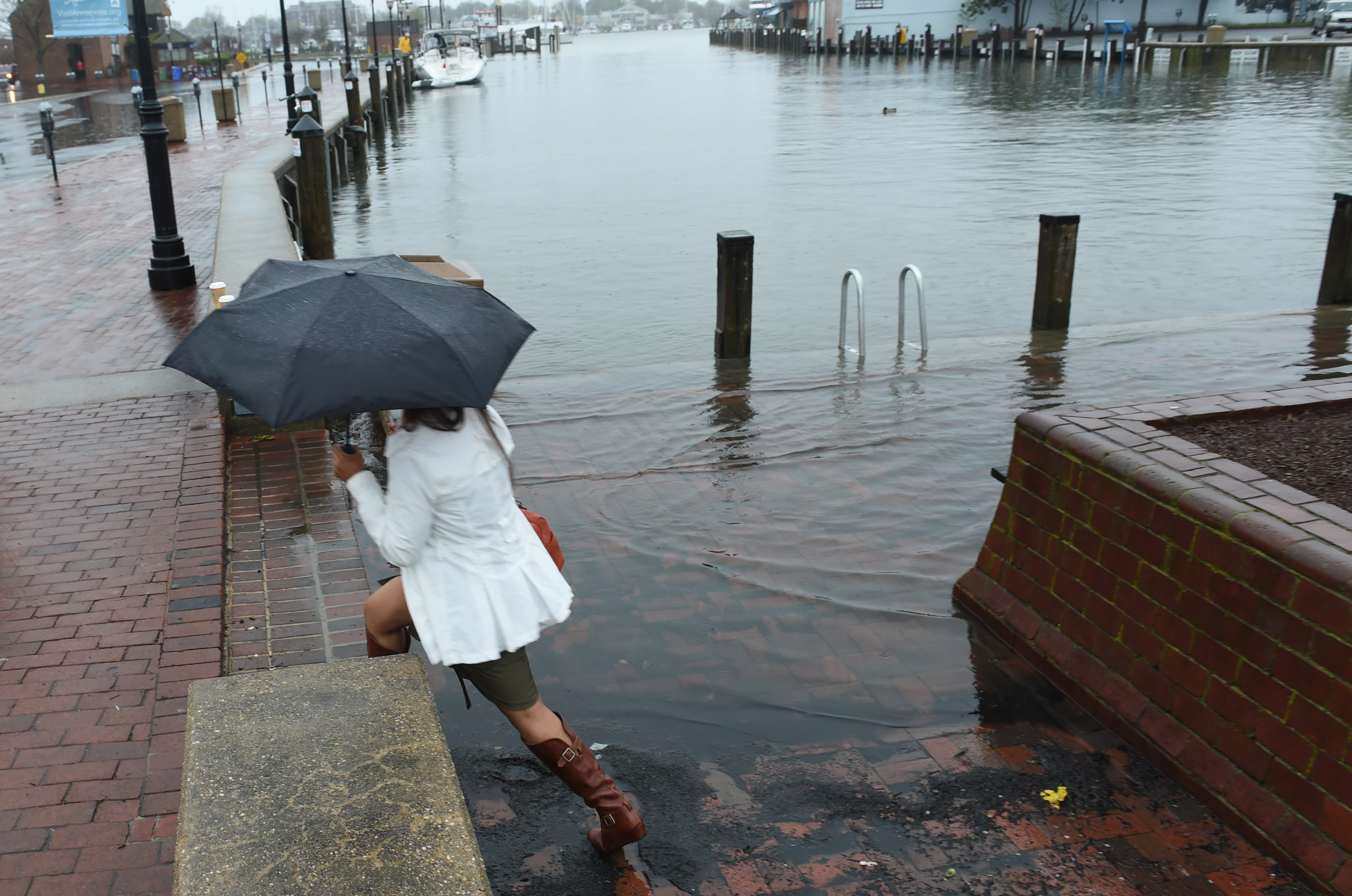 William Stiles, the head of Wetlands Watch, a Norfolk-based group that advises local governments and nonprofits on sea-level rise adaptation and floodplain management, says local officials are just coming to terms with the staggering scale of the challenge. State and local money is limited. Resilience bonds, which could fund extensive capital improvements to deal with flooding and sea-level rise, have been slow to take off. “There is no coordinated strategy nationally, there is not enough money, states are not moving, and this loose talk of resilience bonds in the private sector is not a reality yet,” Stiles says.

He estimates that Norfolk and neighboring Virginia Beach, hotspots for relative sea-level rise on the Atlantic coast, each have about $4 billion in resilience work to do over the next couple of decades. That does not include protecting the port, one of the busiest on the East Coast; the area’s military shipyards; or the world’s largest naval base. A land-use study by the local planning district identified 22 projects, many estimated to run from $10 million to $50 million, including raising roads, improving storm water systems, and making wastewater treatment plants more resilient to serve the six military bases in Norfolk and Virginia Beach.

“It will cost many tens of billions,” he says.

At the federal level, potential funding sources include the Federal Emergency Management Agency, the Army Corps of Engineers, and community block grants from the Department of Housing and Urban Development. But none offer the kind of money necessary to address the need.

FEMA is devising a program, Building Resilient Infrastructure and Communities, focused on funding public infrastructure projects that increase a community’s resilience before a disaster by setting aside up to 6 percent of estimated disaster expenses, a total of $300 million to $500 million per year. FEMA has a $160 million program to fund projects that reduce the risk of flood damage, but Stiles notes that it only covers properties insured by the National Flood Insurance Program, which is $25 billion in debt after covering losses from three hurricanes, Sandy, Katrina, and Ike.

HUD is developing guidelines to spend $16 billion in block grants supporting mitigation activities, but those funds are focused on places that experienced presidentially declared disasters from 2015 through 2017.

The Army Corps, which is moving ahead with a design for Norfolk’s sea wall, has a $98 billion backlog of authorized construction projects, yet only receives annual construction appropriations of about $2 billion, according to a Congressional Research Service report issued earlier this year. Stiles notes that cities will be competing to get in line for that limited Army Corps funding, so a mid-sized city like Norfolk will be up against New York or Miami or San Francisco.

“There’s no other federal agency to whom you can turn,” he adds. “You have to wait for a storm to get HUD community development block grant recovery money. Before a storm, the money is hard to find.”

The lack of federal funding places a heavy burden on state and local governments. In Virginia, the state legislature passed the Virginia Shoreline Resiliency Fund in 2016, but has yet to fund the program. In Norfolk, which is faced with regular street flooding, the City Council recently created “special service districts” to allow residents in a neighborhood to effectively tax themselves to address sea-level rise issues like storm water improvements, wetlands restoration, or floodgate construction. The city manager acknowledged that the program might be seen as giving wealthy homeowners an opportunity to solve their problems, but added that if a richer neighborhood can pay for a fix, it would free money for other areas that could not afford it.

Issuing bonds to pay for resilience projects may be problematic for cities like Norfolk, already burdened by more than $1 billion in debt. “Now that localities are stepping in and saying, it’s time to take action, they’re finding out how complicated the funding part of the picture is,” Stiles adds.

Some cities have begun exploring funding vehicles. Miami’s voters passed a $400 million “Miami Forever Bond” to address sea-level rise ($192 million) and the city’s affordable housing crisis, levying a new property tax to repay the debt. Miami Mayor Francis X. Suarez says he hopes it will become a catalyst for the billions needed in the future. Some other Florida cities have funded resilience work; Miami Beach, for instance, raised storm water fees to pay for $500 million of flood protection projects.

In San Francisco, voters approved a $425 million bond to pay a quarter of the costs of fortifying a sea wall. In Harris County, Texas, voters reeling from Hurricane Harvey, approved a $2.5 billion bond to pay for flood protection. But Jeff Lindner, a meteorologist for the Harris County Flood Control District, has estimated that about $30 billion would be needed to upgrade the county’s 2,500 miles of streams and man-made drainage channels to handle a 100-year rainfall.

Although the growing threat of sea-level rise in cities such as Miami has received widespread attention, other cities like Boston also face severe challenges. In recent decades, the city has greatly expanded its boundaries, turning tidal marshes and shorelines into neighborhoods that are increasingly flooding. By 2070, neighborhoods like the Seaport, East Boston, Charlestown, and South Boston could flood monthly, resulting in $1.4 billion in annual losses to businesses and property. An initiative called Climate Ready Boston has studied the city’s neighborhoods, documented the costs of doing nothing, and then outlined protection steps.

“Over the full city over the rest of the century, we’re looking at a few billion dollars we’re going to have to find,” says Alison Brizius, the city’s director of Climate and Environmental Planning. While Boston is looking at creative ways to fund those projects — such as Resilient Boston Harbor — she adds that more federal funding will be essential. So far, Mayor Marty Walsh has pledged that 10 percent of the city’s annual capital budget — which will total $2.8 billion over the next five years — will go toward resilience efforts, but that amount falls far short of what is needed.

“The city can’t pay for it,” says David Levy, a management professor at the University of Massachusetts Boston and the lead author of a report about financing climate resilience in Boston. “It is beyond the means of Boston, and Boston is a relatively affluent city, let alone the means of the smaller towns up and down the coast.”

The report recommends a multi-pronged approach of federal, state, city, and private financing strategies, including a statewide carbon tax and an increase of the state gas tax; a Boston climate resilience fee based on water and sewer bills, which could fund city general obligation bonds; and “District Resilience Improvement” entities that would raise revenue from those who would most benefit from resiliency actions.

Educating people about the costs of not doing anything, or not doing enough soon enough, is key, Levy and others say.

“The problem with investing in resilience is where is the cash flow?” Levy says. “What we’re doing is protecting against future damage, but there’s not a new positive cash flow. You’re not creating new value. You’re protecting against the loss of existing value. One way or another we’ve got to pay for this, and nobody likes that. So there’s going to be a lot of fights.”

The climate change ‘tipping point’ has already arrived for these 70 U.S. counties