Why shade balls aren't such a great idea after all 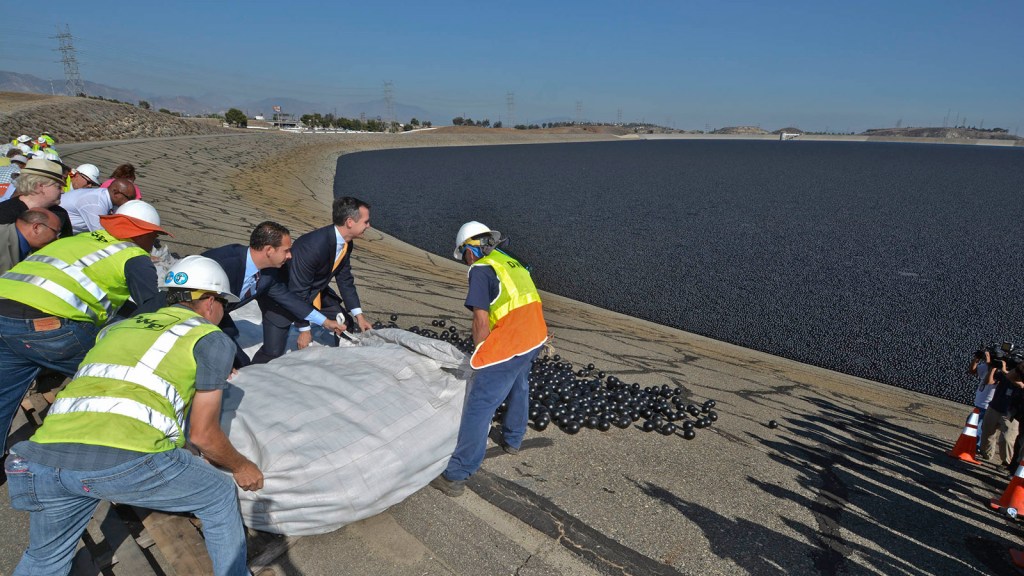 Why shade balls aren’t such a great idea after all

Here’s how the news works circa 2015: A story gets reported, usually by journalists for major media outlets like the Associated Press or The New York Times. Then, when it starts to get traction on social media and shows up in your Twitter feed or your Facebook, the aggregators jump on it. Aggregators are human vultures with lots of student loan debt who put their own particular spin on someone else’s story by turning it into a listicle or writing a clever reaction piece or reducing a 3,000-word feature into a meme. I am one of those vultures — ripping the meat out of stories and regurgitating them here for you. And, while most journalism school graduates probably dream of breaking stories rather than aggregating them, I didn’t go to j-school, and I rather enjoy the roadkill. There are times, however, when this system — thousands of people clacking away at their laptops, re-reporting a story without fact-checking the original work — breaks down.

Remember shade balls? This is one of those stories.

Media all over the country (including us) reported on L.A.’s latest attempt to curb the effects of the California drought. In short, the city dumped 96 million black plastic balls in the L.A. Reservoir to slow evaporation of the quickly dwindling water supply. Los Angeles Mayor Eric Garcetti held a press conference and dumped 20,000 balls on his own, and the media jumped on it. The Times‘ headline read, “In California, Millions of ‘Shade Balls’ Combat a Nagging Drought.” The Washington Post‘s read, “Plastic ‘shade balls’: The hypnotizing tool California is using to save water.” It was covered everywhere from BuzzFeed to National Geographic, and it was largely reported as a story of human innovation. It also gave aggregators a chance to make ball jokes, and human innovation and ball jokes both do well on the internet. Those balls got a lot of clicks.

The problem is, it wasn’t entirely true.

In an article titled “Shade balls are a really stupid way to conserve water,” LA Weekly reports that the city has actually been using shade balls since 2008, well before the drought began, and they aren’t actually designed to prevent evaporation at all. Rather, they are used to block the formation of a carcinogen called bromate. The LA Times wrote in 2008:

The water needs to be shaded because when sunlight mixes with the bromide and chlorine in [the reservoir’s] water, the carcinogen bromate forms, said Pankaj Parekh, DWP’s director for water quality compliance. Bromide is naturally present in groundwater and chlorine is used to kill bacteria, he said, but sunlight is the final ingredient in the potentially harmful mix.

Yup. Not about evaporation. So why did this story take off? Or, in aggregator speak, why did this quick hit have legs?

Well, Garcetti’s office cannily realized that a connection to the drought would provide an excellent hook, especially for national outlets which are always on the lookout for their next “kooky California” story. (“Look at those Californians! They’re running out of water! Hahaha!”)

About $2 million at current rates.

It’s not a magic water-saving tactic; it’s a PR move. And this isn’t the only problem with shade balls. Max Liboiron, a professor who studies marine pollution at Memorial University of Newfoundland, did a deep dive (aggregator speak) into the story, and wrote:

The black additive [in the balls] is carbon black, which isn’t supposed to be harmful when it leaches, which is great. Yet even with this precaution, most plastics leach endocrine disrupting chemicals that interfere with animal and human hormone systems (Yang 2011). Some endocrine disruptors, like bisphenol A (BPA), break down in water after a few weeks or months. Some don’t. We don’t know what chemicals are in the Shade Balls, but they will leach, especially because the balls are in the hot sun and are meant to be left in the water over a long period (reports say 10 years). Most water treatment systems don’t take these kinds of chemicals out of the water.

If endocrine-disrupting plastics leaching into the water supply wasn’t enough to worry about, there’s also the environmental impact. Liboiron writes:

Most plastics found in the marine environment start out as larger objects you would easily recognize, like plastic bags and toothbrushes. Or balls. Over time, they fragment into tiny microplastics. 92% of the 5.25 trillion plastic pieces floating on the surface of oceans (Eriksen 2014) are smaller than a grain of rice because plastics don’t decay into their constituent molecules like organic substances. Instead, they fragment into smaller and smaller bits.

Those smaller and smaller bits are then consumed by you in your drinking water, as well as by the fish that you eat, the whales that you watch, the sea lions that show up at your bar demanding a drink. Remember a couple years ago when we stopped buying face wash with microbeads? There’s a reason. That’s because microplastics are really bad for the environment and the food chain.

To be sure, shade balls will prevent evaporation. But the 300 million gallons a year these plastic balls are supposed to save is really not a whole lot, especially compared to the amount of water used by industry and agriculture. Fracking alone uses 2.14 million gallons of fresh water in California every day, Liboiron writes, and if the agriculture industry cut its water use by only 5 percent, that would save 500 billion gallons in a matter of months.

But, instead of large cuts — instead of dealing with the root of the problem — we have shade balls. The question is, will they be worth the cost?