What can I do to bring the Green New Deal to life? 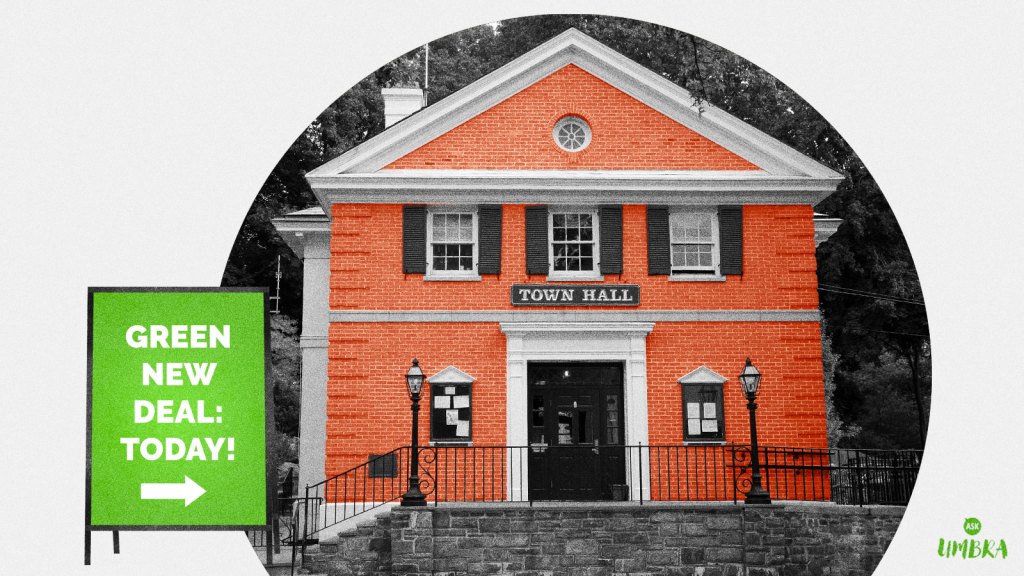 Grist / DougSchneiderPhoto / Getty Images
By The People, For The People

What can I do to bring the Green New Deal to life?

If I have some money to invest in the Green New Deal, where should I start?

Oh, honey. I’m not sure the Green New Deal is a “GoFundMe” situation.

First off, its scale is enormous. The Green New Deal Resolution is a framework to address climate change by “creating millions of high-wage jobs in new green industries, transition[ing] our energy system and building new infrastructure.” Even in name alone, it has taken on a ton of political baggage. Those who oppose it hear those three little words and picture a nation-sized commie kibbutz, but it’s really just supposed to mean a transition to an economy that’s less polluting and more equitable — which obviously doesn’t happen without a lot of laws and regulations to back it up. Oh, and around $50 trillion.

All that to say, the Green New Deal is a massive legislative proposal that has to do with many big, national sectors — labor, energy, and public lands, to name a few — so it’s ultimately under the purview of the various branches of government. If you believe in the power of democracy — something that requires more effort and optimism after January’s assault on the Capitol — that means your best path for personally making a Green New Deal happen is to push for change via grassroots efforts like getting progressive leaders elected, encouraging elected officials currently in office to support pro-environment, pro-worker legislation, and simply mobilizing citizens who want that kind of legislation

If you’re thinking that sounds like a lot of work, you’re right. It is. But as a human who lives on Earth — particularly in a country that was responsible for a whopping 14 percent of global emissions in 2019 — building the kind of government likely to pass sweeping justice-focused climate legislation is your responsibility. Well, yours and a couple hundred million others’.

I spoke with Daniel Aldana Cohen, a sociologist at the University of Pennsylvania and co-author of A Planet to Win, and he emphasized that the actual execution of large-scale societal change requires organizing large groups of people, which takes a great deal of time, effort, training, and infrastructure. “When you’re supporting grassroots organizing you’re helping a lot of different people spend time around each other and work collectively around common goals,” he said.

A key thing to emphasize is the substance versus branding of those “common goals,” so to speak. The three little words “Green New Deal” became so polarized during the past election cycle (as a result, in part, of Trump’s claims that it would ban things like planes and cows) that many moderate Democrats have distanced themselves from the term. So despite the victories Democrats eked out in the past couple of months, there’s no guarantee that a Green New Deal bill would pass. In fact, as my colleagues Zoya Teirstein and Shannon Osaka wrote last week, it’s pretty unlikely. But they reported that some of the Green New Deal’s aims — e.g., emissions-reducing infrastructure and better wages — can still be tucked into other bills that are likely to make their way through Congress.

That’s what makes donating to — or joining! — grassroots organizing groups focused on substantive systemic change such a foolproof strategy, Cohen said. “Substance is maybe the most important thing to be fighting for. And if you’re supporting that organizing directly then I don’t think it will matter what slogan is talked about in D.C.”

Let’s dig a bit more into some of that substance here: Much of the foundational work that needs to be done for a Green New Deal-like bill to pass has to do, not just with emissions, but with voting rights. Poll after poll has shown that Americans support the principles of a Green New Deal — even Republicans used to like the idea! So If you’re making sure that your local representatives actually represent the interests of the people who live in their districts, that’s substantive, pro-Green New Deal change. Pennsylvania State Representative Sara Innamorato, who represents part of north Pittsburgh and its suburbs, emphasized this point: “The Green New Deal only works with strong local government and strong local democracies, because they’ll be responsible for implementing those policies.”

And those policies — yet again! — do not have to exist under the title of “Green New Deal.” You can probably find a lot of bipartisan support for measures that keep industrial sites from polluting or publicly subsidize child care (it’s hard, after all, for a parent to show up for the community meetings without a babysitter). That’s because people generally support policies that keep their families and their neighbors healthy. The unfortunate politicization of the words “Green New Deal” — along with terms like “climate change” and slogans such as “wear a mask” — means that, even though they are fundamentally about the health and resilience of communities, trotting them out in a conversation with more conservative neighbors is likely to result in not actually being heard.

Many local grassroots movements know this. Furthermore, they know how to gain support using proof of concept rather than rhetoric. “Legislation is never easy, it never happens in a short amount of time,” Innamorato explained. “But on-the-ground projects can get people saying, ‘OK, if we did this here, imagine if we had intentional policies that facilitate these projects.’”

And in the end, your time is just as valuable than your money, if not more so. If you’d like to see a Green New Deal-type transformation, you’ve got to be investing in your community, reaching out (tactfully) to your neighbors, showing up to local town halls, and volunteering for those grassroots movements yourself!

It’s tempting to envision the Green New Deal as this great, sweeping overnight transformation, perhaps one in which Bernie Sanders flies through the sky like a sort of eco-Santa Claus, sprinkling the whole nation with wind turbines and solar panels and higher wages. But in reality, that necessary change will only happen bit by bit, from the ground up, in towns and cities.

That’s a vision still very much worthy of your investment — but it’s going to take more than a single check to get there.