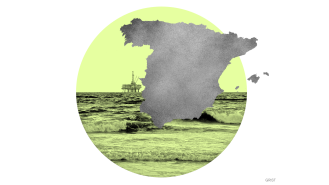 Spain just became the latest European country to commit to ending fossil fuel production. The move to phase out oil and gas production by 2042 is a part of a sweeping new climate bill approved by the country’s legislature last week. The legislation, which aims to bring the country in line with the European Union’s target of carbon neutrality by 2050, also bans the sale of carbon-emitting vehicles by 2040 and requires that renewable sources account for 74 percent of the country’s electricity production by 2030.

Within the past five years, Denmark, France, and Ireland have passed similar laws ending fossil fuel exploration and drilling. These European commitments are much stronger than those made by the U.S., where President Joe Biden has implemented only a temporary ban on new drilling leases on federal land.

Compared to its European counterparts, Spain’s new law does lag on some levels. For example, while Denmark committed to reducing its emissions by 70 percent compared to 1990 levels by 2030, Spain’s law commits the country to reducing emissions by just 23 percent over the same time frame.

Teresa Ribera, Spain’s minister for energy and the environment, acknowledged in a tweet that the new climate law “should have been put in place 10 years ago.” However, she signaled that it may be just a starting point, calling the new measures “an essential law we must continue to build on.”

A gas main exploded in a Baltimore-area suburb on Friday, injuring three utility workers and cutting off gas for about 200 customers. The incident follows a deadlier gas explosion that occurred in the Baltimore region last August.

Tree poachers have illegally logged about 100 trees, including endangered Douglas firs, on Vancouver Island in British Columbia this year. Experts speculate that the poaching could be related to a climate change-fueled lumber shortage, which has resulted in skyrocketing wood prices.

The most powerful cyclone in more than 20 years is approaching the western coast of India, leading officials to suspend vaccinations as coronavirus variants ravage the country. The storm has already caused power outages and killed at least six people. Officials expect 115-mile-per-hour winds and a tidal wave of up to nine feet in places.