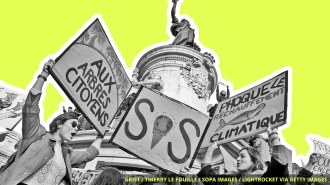 In a landmark decision, a French court ruled that France was responsible for “ecological damage” by failing to meet its own targets for reducing greenhouse gas emissions.

The administrative court’s ruling gives the French government two months to take action before the court will order it to take specific steps to reduce emissions. In a symbolic gesture, the ruling also requires France to pay $1.20 each to the four environmental groups that brought the lawsuit.

In June, the country’s environment ministry had claimed that the government could not be held individually responsible for climate change in France because it’s a product of global activity. However, the environmental groups’ victory in court hinged on the fact that France had failed to reduce greenhouse gas emissions as required by several treaties and national legislation. To meet its obligations under the 2015 Paris Agreement, France vowed to cut its emissions by 1.5 percent each year — but emissions fell only 0.9 percent from 2018 to 2019.

Like a similar ruling in the Netherlands in 2019, the Wednesday ruling gives optimism to activists who hope the case will set a legal precedent for citizens seeking to force their countries to comply with their climate obligations.

A first-of-its-kind study found that human-caused greenhouse gas emissions are directly responsible for glacial melt that increases the risk of a disastrous flood in the Peruvian Andes. Such a flood could result in a landslide that would endanger 120,000 people. Since the study shows a direct, cause-and-effect link, it could be used as evidence in lawsuits seeking to hold polluting companies accountable for contributing to climate change.

California’s rainy season now starts one month later than it did 60 years ago, according to a new study, a shift that is consistent with existing research. This delayed rainy season is prolonging California’s wildfire season and worsening water shortages.

Agriculture is the No. 1 threat to 86 percent of endangered species, according to a report published on Wednesday. Since 80 percent of this agricultural land is used to raise animals, the report’s authors recommend plant-based diets as a key component of efforts to reverse biodiversity loss.