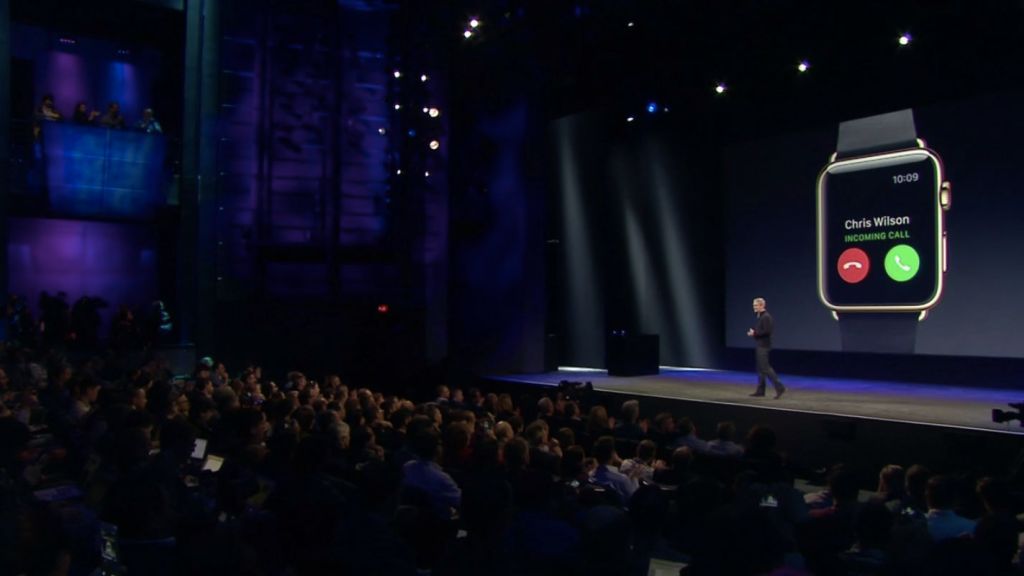 As Tim Cook announced in an Apple broadcast conference today, Apple Watch is coming out in April — the 24th, for those of you who can’t wait to have an iPhone melted down and injected in your bloodstream, essentially.

Apple Watch includes the following dystopian features: Wirelessly transmitted physical taps that your friends can send to get your attention, as if the ubiquitous boodle-BOOP! tone weren’t annoying enough; the ability to send your heartbeat to a loved one, possibly to let him know that you have just drunk four Red Bulls in a row and might die; and a litany of fitness apps to make you feel shitty — with reminders! — about failing to meet your daily “calories burned” quota.

And, as Cook very creepily said during the launch announcement: “Apple Watch is the most personal device we have ever created. It’s not just with you, it’s on you.”

That is what you say to your friend, in an urgent tone, when a large spider has crawled into her hair.

There’s been a fair amount of talk about how no one cares about Apple Watch, no one will buy it, and maybe it will go the way of Amazon Fire. To which I can only say: God, I hope so.

Cook kicked off the conference by reminding everyone that, barring surgical intervention, we’ve become about as attached to our smartphones as humanly possible: “We never leave home without it, for the vast majority of us it’s never more than an arm’s length away.”

When Grist intern Liz Core temporarily lost her phone a couple weeks ago and I returned it to her, she said that she had felt a sort of “phantom limb” syndrome for the 48 hours it was gone — falsely feeling it vibrate, etc. Which smartphone-owner out there doesn’t immediately sympathize with this? Isn’t that a problem?

The announcement of Apple Watch really did make me feel depressed, and has inspired me to follow the lead of a few of my fellow Gristers and take a hiatus from my phone for a week. But not this week, because I have to travel. Goddamn it. Anyway, stay tuned!