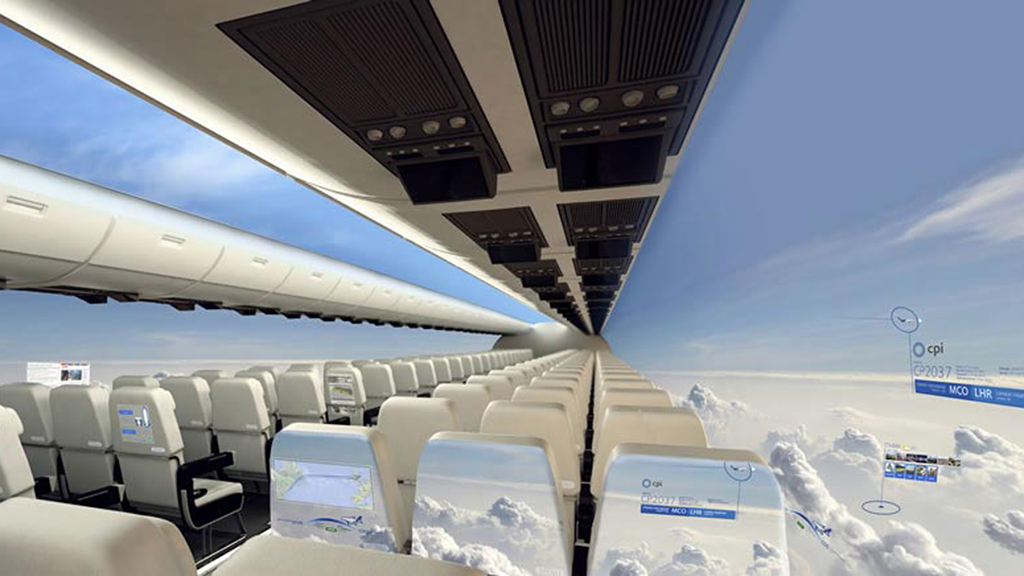 The Center for Process Innovation (CPI) recently proposed an airplane design with floor-to-ceiling wraparound screens that make those tiny, frustrating monitors on the back of seats look like child’s play.

Also a thing of the past? Windows. The design eliminates windows in order to reduce the overall weight of the plane, thus cutting down on fuel consumption, costs, and carbon emissions. The wraparound screens are a patch for the ensuing claustrophobia that would come from being in a windowless box with hundreds of strangers for hours.

The screens won’t be blaring blockbusters and advertisements for snack boxes (we hope); CPI says it plans to use exterior cameras to broadcast real-time footage of what’s going on outside of the plane onto light and pliable OLED screens inside the cabin. So, when you’re flying at just the right altitude during a thunderstorm, you might feel a little like Dorothy spinning through a twister on her way to Oz!

Even though the details for the design are still vague, CPI is making reducing aircraft carbon emissions (which are, by and large, pretty dang nasty) a primary goal. Here’s more from Slate:

CPI says that more than 80 percent of a commercial plane’s takeoff weight is the vehicle itself and not passengers or baggage. And the group adds that for every 1 percent in weight reduction, companies can save about 0.75 percent on fuel. CPI doesn’t seem to be offering a specific estimate of how much weight it could reduce by eliminating windows, but it says that fuselages could be thinner and stronger through the process, which could mean wider seats.

The design won’t be viable for another decade, but between this and the grease-powered plane, we can’t wait for the alternatives to today’s CO2-pumping planes. Oh bother, we’ll just walk.