We won't stop future Fergusons and floodwaters by planting a tree 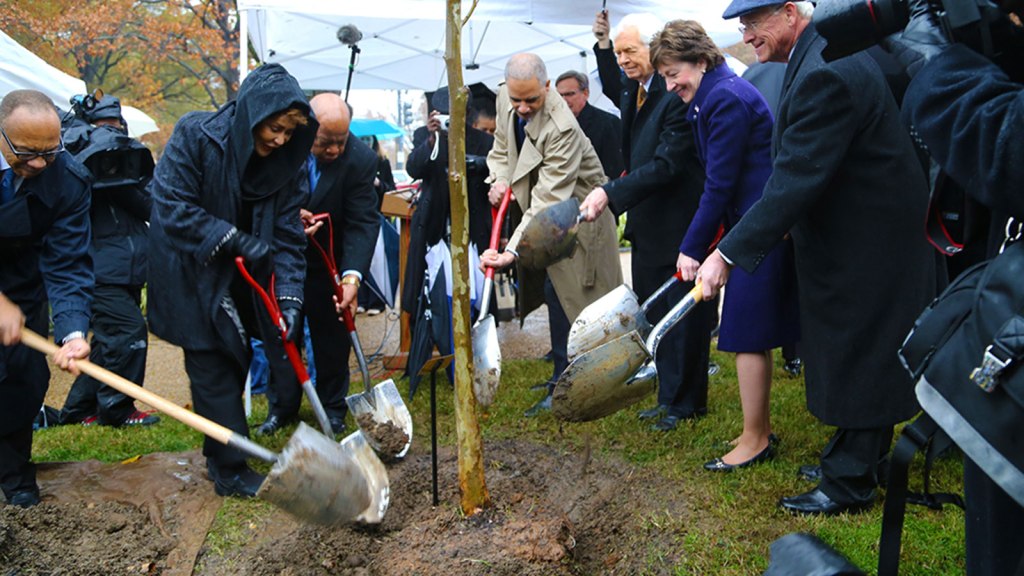 The Office of Thad Cochran
Politics

On Monday, Attorney General Eric Holder joined civil rights leader Rep. John Lewis (D-Ga.) and Sen. Thad Cochran (R-Miss.) in planting a sycamore tree at the U.S. Capitol in honor of Emmett Till, the African-American teenager tortured and murdered by white men in Cochran’s state in 1955. Till’s killing is cited as the spark for the civil rights movement. His killers were never brought to justice.

“The American sycamore that we dedicate to Emmett Till would have been familiar to him in the parks and tree-lined streets of Chicago,” Sen. Susan Collins (R-Maine), who co-sponsored the effort with Lewis, said at the ceremony.

The event was timely, given many people are anxiously awaiting a grand jury decision on whether Ferguson, Mo., police officer Darren Wilson should be charged criminally for killing 18-year-old, African-American Michael Brown. In dispute is whether Wilson had just cause for this, or if Brown’s death is yet another case in a long history of white law enforcement terrorizing black people in America.

Holder alluded to the latter in his speech at the tree planting Monday, saying of Till:

Yet even today, the pain from this unspeakable crime, this unspeakable tragedy, still feels raw … perhaps because our history — including our recent history — is dotted with the stories of far too many other Emmett Tills, Matthew Shepards, and James Byrds: talented, thriving people, many of them young, with promising futures stretching out before them — all cut down, brutally and unnecessarily, because of what they looked like or who they were.

Bridget Bowman reported in Roll Call that Holder made a more direct reference to Brown after the event, saying, “The struggle goes on, and it’s not only Ferguson but a lot of communities around our country where we are dealing with relationships that are not what they should be. There is an enduring legacy Emmett Till has left.”

The tree will be considered Till’s “living memorial,” Holder said.

Planting trees is great in almost any context, and I wish the federal government found more reasons to do this. Congress members planted a tree in memory of Anne Frank earlier this year, a white chestnut, to symbolize the tree Frank mentioned seeing outside of her hiding place in her diary. Collins suggested then that Till should also have a tree.

But there’s something empty about using it in the context of the grave injustice that lead to Till’s gruesome murder. A better way to honor Till, and rehab the racism that claimed his life and many other black lives before and after him, would be to not just plant a tree, but maybe, I don’t know, plant policies that could actually end this vicious cycle?

I know, that’s tough to do in Congress. I mean, back in Till’s day, they had a hard enough time just passing a law to prohibit lynchings, which seems pretty slam-dunk to me. But consider that the Till tree ceremony was a bipartisan event. Not only was Cochran on hand, but so was Mississippi’s other senator, Roger Wicker, the new chair of the National Republican Senatorial Committee.

Said Cochran at the event:

Emmett Till’s legacy carries with it memories of the risks so many took in my state, and elsewhere, in efforts to advance the cause of racial justice. … I am proud of the progress my state and our nation have made since those times, and I appreciate the contributions of so many leaders who made it possible.

I don’t believe him.

Here’s what’s happening in Cochran’s state: Six white men plead guilty to federal hate crime charges when they killed James Craig Anderson, an African American, by running him over with their truck. That was in 2011. Four more white people were charged with hate crimes for Anderson’s death this year.

Here’s how you “advance the cause of racial justice”: You support legislation that helps people of color living in a former Jim Crow-Confederate-slaveholding state have safety and equal protection under the law. Cochran’s had opportunities to do that, with the Racial Profiling Act introduced by Sen. Benjamin Cardin from Maryland last year, and by supporting the new Voting Rights Act bill, created to fill voids made by the Supreme Court when it gutted the civil rights legislation. Both bills have languished, though, and Cochran has made no commitment to help along the voting bill despite having survived his last re-election on the strength of black votes.

Racial justice includes environmental justice as well, which Cochran also falls way short on. Three days after the Till ceremony, he sent a letter to President Obama begging him not to issue an executive order on new Federal Flood Risk Management Standards (FFRMS). Obama has created a multi-agency workgroup dedicated to creating new flood risk standards because Congress has failed to produce adequate legislation on this. This frightens the Mississippi senator, and here’s why, straight from Cochran’s press release:

Cochran expressed concern that Obama may soon issue a new executive order related to FFRMS that requires the adoption of “the most recent science on expected sea-level rise and take into account the impacts of climate change” to create higher base flood level elevations for federally funded investments, such as new construction, flood mitigations projects or Hazard Mitigation Grants.

He’s worried that the Obama administration might use science to determine how to best protect a state like Mississippi, where some of the costliest and deadliest hurricanes have hit — Katrina, Rita, Gustav, and Isaac in just the last 10 years alone. And yet Cochran warned in his letter that caution should be taken when we “spend taxpayer dollars to further mitigate against undefined threats.” Thousands of poor African Americans lost their homes in Katrina and still had not recovered many years afterward due to such “undefined threats.”

The fossil fuel industry has contributed over a half-million dollars to Cochran’s campaign committees and leadership PACs throughout his career, according to the Center for Responsive Politics. This helps explain his co-sponsoring of legislation to build the Keystone XL tar-sands pipeline, which would only add to the bombardment of oil and gas operations peppering the Gulf Coast. The $1.5 million he’s taken from the agriculture and crop production industries since 1989 might also explains his recent beef with new Clean Water Act regulations, which Mississippi farmers believe will hurt their activities (though they really wouldn’t, as Boer Deng explains over at Slate). Storm runoff pollution from farms carrying toxic pesticides and chemicals is the primary cause of the Gulf Coast’s “dead zone,” which has damaged fish and shrimp populations, a food and business source for many low-income communities.

He’s also made Mississippi a healthcare deadzone by voting against the Affordable Care Act. His state perennially leads the nation in virtually every ranking on poverty, disease and disability. It’s second only to Nevada in percentage of uninsured African Americans, with 26 percent. The ACA would have expanded federal Medicaid to help fix that. Instead, he’s sponsored legislation to repeal or defund the law numerous times.

I wonder if all of this was on the minds of Rep. John Lewis and Holder as they heard Cochran speak at the tree planting. Cochran said he hoped the tree “will serve as reminders to all of where we’ve been and to be dedicated to justice for all through our examples now and in the future of the United States.” But there won’t much of our future, if he and his lawmaking colleagues throughout the South won’t commit to policies that are actually dedicated to the kind of justice that honors Till.