It’s not a new idea, perhaps, but it bears repeating: Even if you live in a city that is “racially diverse,” that doesn’t mean you live cheek-by-jowl with people of other colors and ethnicities.

Take Chicago, for example, which is among the most diverse cities in the nation. But a FiveThirtyEight analysis, based on data from Brown University’s American Communities Project, found that Chicago is by far the most segregated city in the U.S.

That’s because if you look at Chicago’s racial makeup on a smaller scale – census tracts of about 4,000 people – it gets pretty darn homogenous (here called the “neighborhood diversity index”). If you then look at the diversity of those neighborhoods in relationship to Chicago’s overall diversity, it gets very homogenous (the “integration-segregation index”).

According to FiveThirtyEight, the American city with the most racially diverse neighborhoods is Sacramento, Calif., but the most effectively integrated city of all – if you look at how racially integrated a city theoretically could be, based on its overall racial makeup – is Irvine, Calif. Here are the rankings: 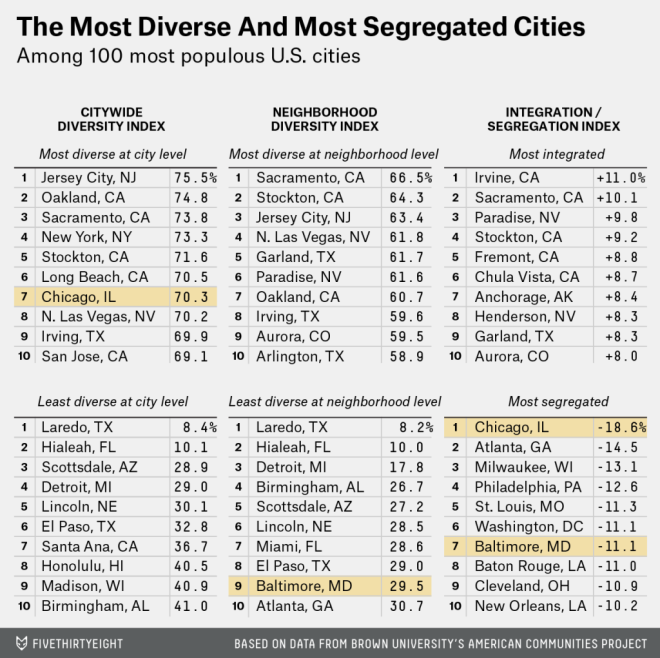 (Read it all nicely explained here.)

Segregation is something we all know and experience, but it does pop the eyebrows to see it broken down into numbers like this – or beautifully, hauntingly portrayed, as with Dustin Cable’s interactive, color-coded Racial Dot Map that uses data from the 2010 Census to depict just how tightly clustered racial groups are across the country. Portland, Ore., “the whitest city in America,” looks like a dusting of red, green, and yellow (Asian, black, and Hispanic) on the outskirts of a blue sea (white): 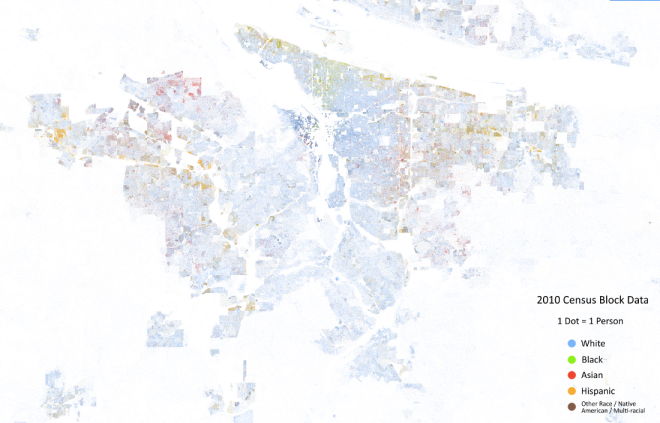 Of course, segregation has big implications when it comes to equity (duh) and to environmental justice: The black and brown areas of a city are far more likely to face off with a refinery, a waste incinerator, or a toxic dump, and therefore have lower-quality air and water and higher rates of asthma and cancer and poor birth outcomes than white areas. And segregation could be a big part of why black, Latino, and Asian Americans have longer, shittier commutes, too.

It’s official: California farmers volunteer to give up water