Baltimore youth get another big win in fight against incinerator 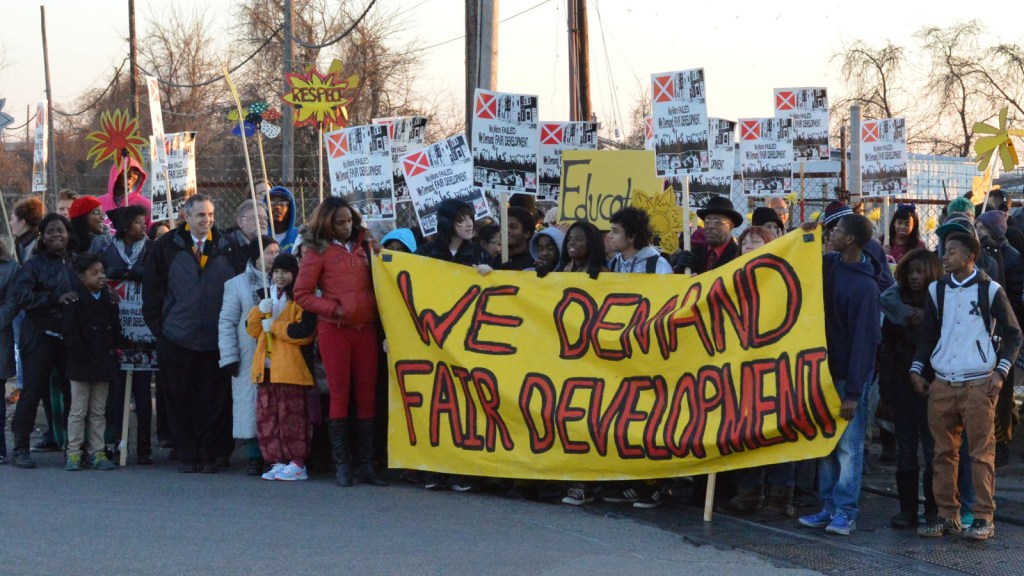 Protest in Baltimore: March to Stop the Incinerator United Workers
Ya burnt!

Baltimore youth get another big win in fight against incinerator

The youth of South Baltimore have scored another round in their fight to keep a mammoth waste incinerator out of their neighborhood. Baltimore County’s regional cooperative purchasing committee voted to end their contract with the company Energy Answers, which has plans to build a $1 billion solid waste-to-energy facility in the working class neighborhood of Curtis Bay. (Ever watch The Wire? Season Two? That neighborhood.)

The youth organizing group Free Your Voice, made up of students who live or attend school close to the proposed incinerator site, has been mobilizing friends, neighbors, teachers, and other school administrators over the past three years to reject the waste-burning facility. As fans of The Wire may remember, Curtis Bay is already overrun with pollution-heavy industrial operations and port activity.

Baltimore Metropolitan Council communications officer Laura Van Wert confirmed for Grist that it is preparing to part ways with the incinerator project, stating: “The Baltimore Regional Cooperative Purchasing Committee, in its continued effort to provide the most reliable and cost-effective energy to its members, voted to go in another direction on Feb. 10 and recommended termination of its contracts with Energy Answers.”

The waste-to-energy project, which would convert plastic, rubber, and trash into 160 MW of energy, had already hit some speed bumps by failing to purchase pollution offset credits by the agreed-upon date and also not securing all of the financing needed to started building. A spokesperson for Energy Answers told us that she could not comment on the council’s vote to end the contract because she had not heard anything about it yet.

Meanwhile, Free Your Voice and its green-focused partners Environmental Integrity Project and United Workers are calling this a victory for their community.

“This is a really big step for us,” said Free Your Voice leader Destiny Watford. “I’m excited that the purchasing committee voted to withdraw their support for the incinerator. This decision gives us the opportunity to work with the purchasing committee for a truly healthy and sustainable project in Baltimore that respects our human right to clean air.”

As reported in The New York Times in January, the Energy Answers facility would be allowed to emit up to 240 pounds of mercury and 1,000 pounds of lead annually. A report from the Environmental Integrity Project says that this facility would burn more mercury than the average large-scale coal plant. Not to mention, there is already a cluster of coal plants and other pollution facilities in the community — all within a mile of elementary schools, playgrounds, and people’s homes.

But Energy Answers believes that its waste-to-energy project is a cleaner alternative to Maryland’s current methods of using waste and generating energy:

[T]he reality is that Marylanders generate tons of solid waste each and every day. If there is no waste-to-energy facility available, these tons of trash are simply dumped into landfills, no value is derived from the waste, and our State continues to rely on coal-fired generation to account for 55% of our energy needs. Therefore, the question is not whether waste-to-energy facilities are better for the environment than coal-fired generation or better for the environment than the land filling of trash, but rather whether waste-to-energy facilities are better than the combination of coal and land filling, based on the best available science. The answer to that question is a qualified ‘yes’.

It was enough to win buy-ins from former Maryland Gov. Martin O’Malley (D) and Baltimore Mayor Stephanie Rawlings-Blake, who’ve been given high marks for prioritizing green policies (we’ll see how green Maryland goes now that the state has a Republican governor). Energy Answers was further helped along when the state allowed for waste-incinerated energy to qualify as a top-tier renewable energy source as part of the state’s renewable energy standards.

But having failed to honor its legal offsets obligations, and now without a major purchaser for the energy it hoped to produce, it looks like the facility’s chances of being built are dwindling to zero.

“This troubled project has had persistent and ongoing problems complying with multiple laws, including state incinerator siting laws and the federal Clean Air Act,” said Leah Kelly, attorney for the Environmental Integrity Project. “In addition, it could add large amounts of toxic pollution — including brain-damaging mercury — to the air and water in an already-polluted area.”

Waste-to-energy technology hasn’t been tested adequately enough to confirm whether it can be a net benefit to the environment and economy. There are too few U.S. projects of the kind in existence, and all of them are small-scale. In fact, if built, Energy Answer’s facility would be the largest in the nation. But poor-to-working-class communities are not the places that deserve to be experimented upon.

The area in which Energy Answers wants to build was once a public housing community whose residents were all displaced to expand the industrial parks there. It was a good thing that those public housing residents were moved from an already toxic setting. But an underlying issue in that case is that community residents didn’t have the power or resources to determine what could be built in their community, where they could live, and how to improve their lives. The youth of Free Your Voice are helping to change that dynamic, and they’ve been guided by their own model of equitable development — or what they call “fair development,” which is based on human rights principles.

This means that before anything is planned for their community, Free Your Voice members and allied advocates encourage residents to consider questions like: Are the benefits and costs of the project shared fairly? How much transparency is there in sharing all of the information about the project for the community to weigh? Are there clear, actionable measures in place that hold the project accountable for promises made to the community?

The fair/equitable development model also seeks alternatives if plans and projects on the table end up risking community health in any way. The Free Your Voice coalition put the incinerator through this rigorous analysis, which is how they concluded that they didn’t want it. One of the alternatives the group is now seeking is a solar farm built where Energy Answers still wants to build its waste-burning facility.

“Our community shouldn’t have had to worry about an incinerator being built here in the first place,” said Free Your Voice’s Brandon Champagne, also a Curtis Bay resident, “Because we’re people just like everyone else, and our community is already overpolluted. I am glad [the county purchasing committee] came to their senses and changed their minds. Start making the right choices with us in the community, and we’ll make a big change for our city. Until then, we’ll keep freeing our voices.”