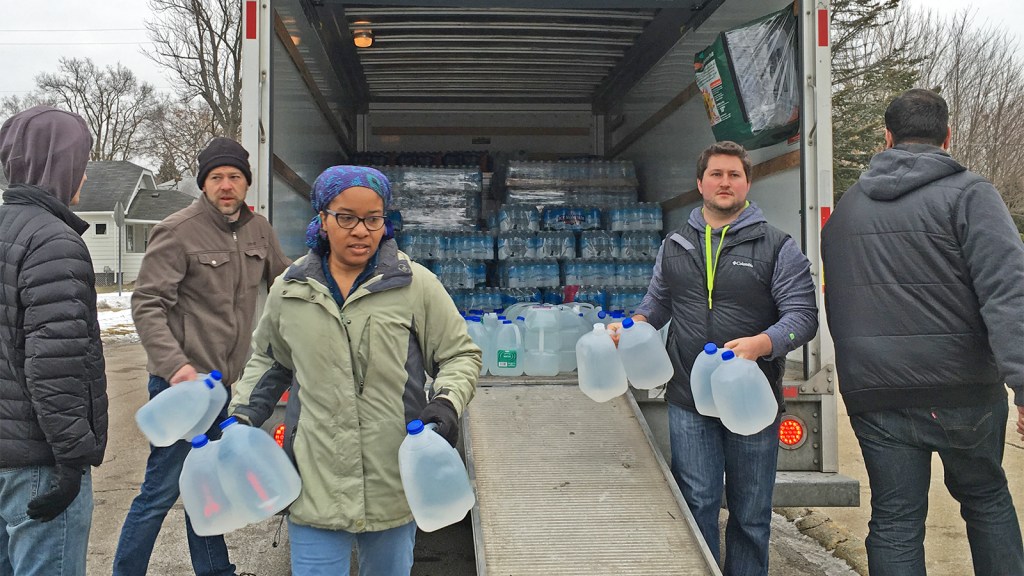 Being undocumented in the United States following a natural or human-made disaster always carries additional risks. In Flint, Mich., where the municipal water supply has been contaminated with lead, undocumented immigrants have been turned away from getting emergency water at distribution centers because they couldn’t produce driver’s licenses.

State officials clarified their position a few days ago, when they claimed that identification is requested, but not required, in order to get water. But that doesn’t mean undocumented residents are exactly lining up now — and it doesn’t mean that not getting clean water is the only disadvantage here.

Remember those immigrant raids just a few weeks ago, at the start of January? They targeted Central Americans. And, according to One Michigan for Immigrant Rights board member Samantha Magdaleno, the bulk of the estimated 1,000 undocumented immigrants peppered on Flint’s Eastside neighborhood are Central Americans from El Salvador, Guatemala, and Honduras. These folks are already scared of immigration raids — and aren’t eager to get too close to anyone who’s going to demand identification.

“Have you seen what happens to kids diagnosed with lead poisoning?” Magdaleno asked me when we spoke by phone Wednesday. I haven’t. “They have to get these really painful shots, have to get on a special food diet, see their doctor,” she explains. “It’s not a one-time fix — it’s long-term care.” That kind of long-term care isn’t always available in Central America. Yet, as Magdaleno points out, Flint’s mayor, Michigan’s governor, and President Obama himself haven’t said a word about protecting Flint’s undocumented immigrants from deportation. There’s no accountability to this community — the state seems to view it as practically disposable. As a result, people in it have to figure out how to fend for themselves.

That’s of course if they even know, to begin with, that there’s a water crisis in Flint. Magdaleno says that just three days ago, canvassers found family after family that wasn’t aware there was something wrong with the water. “There was one woman with three kids, and she told us she didn’t understand why we were even there,” says Magdaleno. The woman’s children have rashes, and she herself has been experiencing hair loss, says Magdaleno, but she was drinking the water and bathing her kids in it. That’s because she didn’t know any better: “She had no idea about the water situation.”

Although Flint’s official water response team has distributed flyers alerting residents of the crisis, the materials were all in English. It wasn’t until a few days ago, after One Michigan for Immigrant Rights and the Detroit Hispanic Development Corporation translated and printed flyers, that materials in Spanish were finally available. These groups also distributed the flyers — all with their own funds.

St. Mary’s Church in Flint has been a destination for donations and pick-up of bottled water, filters, baby wipes, and liquid formula. But for undocumented families — or mixed-status families, where a parent or two might be undocumented, but the children are U.S.-born citizens or green card holders — getting a hold of lead testing kits also remains a challenge. The kits that test lead in the water are distributed by the same centers that were demanding IDs to hand out water, scaring off deportation-wary immigrants.

Lead poisoning testing is yet another obstacle. “Just like for any health services, they ask you for ID, so people who have gone to try to get their kids tested have been turned away because they don’t have proper identification,” says Magdaleno. She adds that her organization has contacted the University of Michigan to try to get medical students to provide lead testing at St. Mary’s, but that’s still in the works.

Here’s the short of it: Undocumented immigrants, especially those who don’t read or understand English, aren’t being informed that they or their children may be poisoned. If they are informed, they may be too terrified to get their water or bodies tested for poisoning. And they’re also too scared to get emergency clean water at most distribution centers (which also lack Spanish speakers) because they understandably think it puts them at risk for deportation.

The silent story of what’s happening to Flint’s undocumented population is what happens when draconian immigration policies butt up against an environmental disaster: the most vulnerable people lose.