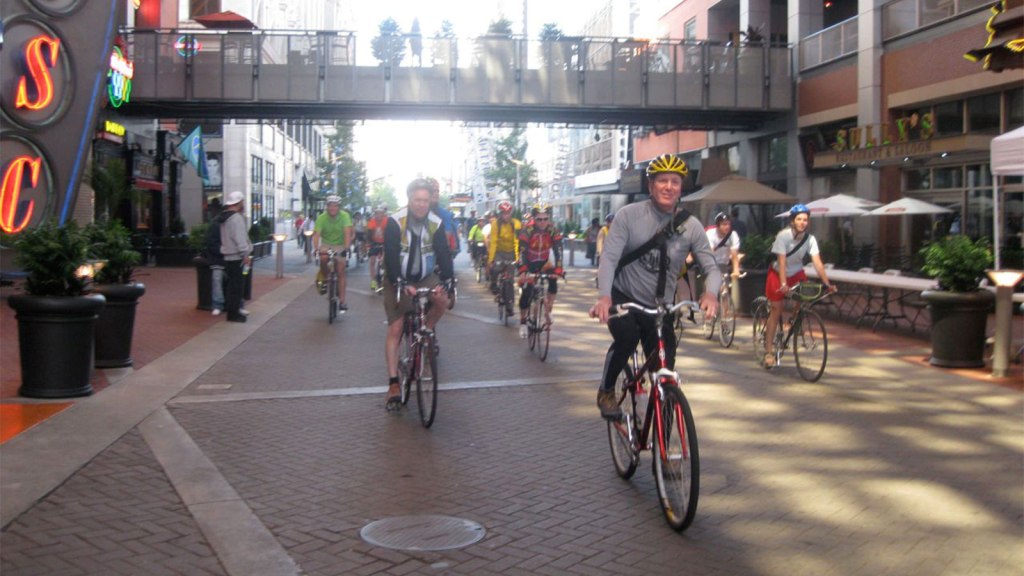 Louisville, Ky., the Gateway to the South, is claiming the lane — lots of them, actually — for non-car commuters. The city’s bike department, Bike Louisville, started blocking streets to motor vehicles and diverting cars to roundabout detours. This calms traffic stress down to a level of approximately zero, and creates an emissions-free environment where cyclists and pedestrians alike can feel safe.

Now, Bike Louisville is implementing a citywide system called Neighborways that slows down traffic in residential areas, and adds trees and other green infrastructure. Heck, but if this is the gateway to the South, count me in.

Neighborways started as a response to concerns about cars and trucks zooming around on neighborhood streets. In response, Bike Louisville is marking streets with cycling signs, complete with pictographs, that guide bikers and remind drivers to cool their engines and share the roads with the little guys. When Neighborways is complete, 100 miles of Louisville streets will be marked.

Next, Bike Louisville will add “wayfinding” signs that direct cyclists to designated nodes, or noteworthy destinations, to help them — yep,  find their way around the city. If the Neighborways project gains enough support (and, more importantly, funding), Bike Louisville developers plan to build “bump outs” — or curb extensions — on roadways to give them further incentive to slow the hell down.

Louisville has been committed to becoming a bona fide bike-friendly city for almost a decade. In 2014, the city was awarded a bronze medal from the League of American Bicyclists’ Bicycle Friendly Community Program. (What? You didn’t know there were Olympics for bike lanes?)

We all know that Louisville isn’t the first city racing to make streets slower and safer for bikers. But all that green work is especially important there: Louisville has the worst urban heat island in the country, thanks in part to a dearth of trees.

So, keep it up, Louisville! I can feel the Southerly love all the way from Seattle — or is that just the Louisville heat?