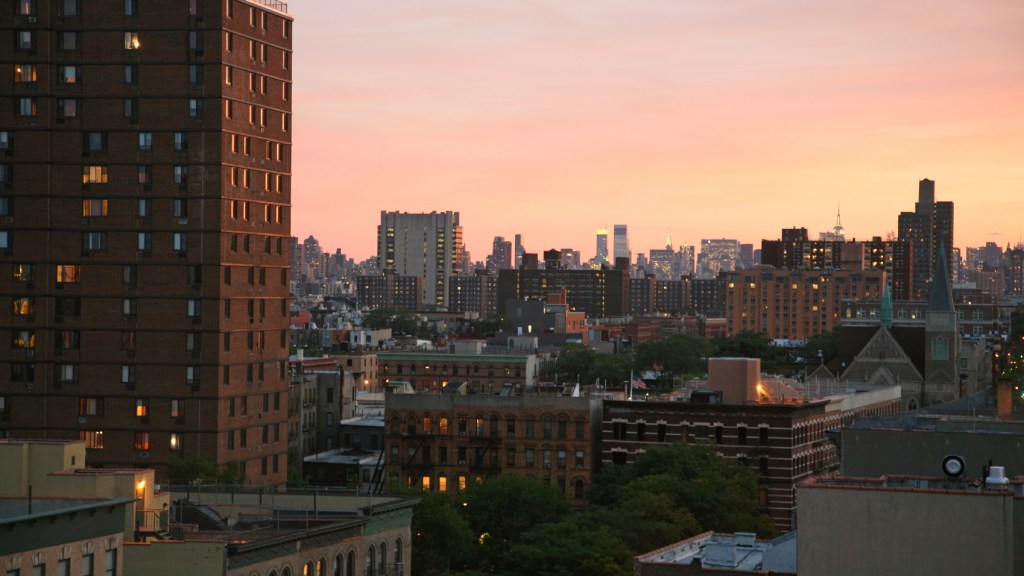 Three years ago, Hurricane Sandy swamped lower Manhattan and forced Wall Street to close for a headline-making two days. The storm shut down northern Manhattan, too. But that part of the island, which contains the largely black and Latino neighborhoods of Harlem and Washington Heights, didn’t recover as quickly. That got residents thinking about how to create a plan for their climate reality.

Josette Bailey lives in Harlem — and she’s quick to tell you that her family has been there since 1917, when her grandmother arrived from the West Indies. Bailey, a grant writer by day, was active in President Obama’s election in 2008 and conducted digital outreach for the campaign in 2012. After the election, which took place just days after Hurricane Sandy struck the place she’s always called home, Bailey says that she was looking to translate her energy into continued action. “We were thinking of forming our own community organization,” she says. That’s when a neighbor introduced her to WE ACT.

WE ACT, aka West Harlem Environmental Action, Inc., had been around for more than two decades. The environmental organization — which is among the first to be run by people of color — focuses on northern Manhattan, which is home to the North River Sewage Treatment Plant as well as the bulk of Manhattan’s diesel-burning bus depots. Like so many communities of color, northern Manhattan’s roughly 600,000 residents deal with a disproportionate amount of pollution and absorb the health risks that come with it. A community-based organization, WE ACT had a long history of focusing on research, policy, and the courts, but by the time Bailey heard about it, it was concentrating on building community participation, too.

After Hurricane Sandy, WE ACT saw an opportunity to think big with its neighbors and members in the form of a climate action plan. The plan outlined a community vision, shaped by input from northern Manhattan neighbors, which could be implemented into tangible policy.

“I’ve always been interested in democratic infrastructure and empowering people through a fair political process,” explains Aurash Khawarzad, WE ACT’s policy advocacy coordinator. Khawarzad, who is formally trained as an urban planner, managed the organization’s community-based planning process, which took about seven months. WE ACT ran workshops using scenario-planning techniques in order to identify the greatest threats posed by climate change, the capacities the community holds to address those threats, and the capacities that still need to be built.

The result is the Northern Manhattan Climate Action Plan, which “uses the frameworks of environmental justice, resilience, and social cohesion to guide its recommendations.” The plan presents a general blueprint for how the community can organize to increase its political influence and economic power, as well as how to deal with the impacts of climate change. On an island like Manhattan, increased and more powerful storms, along with rising sea levels, may bring those impacts sooner rather than later — and the plan hopes to protect the people who live in the northern part of the island, where residents haven’t traditionally held much political power.

At the core of the climate action plan are four major areas of work: energy democracy, emergency preparedness, social hubs, and greater participation in local governance. Part of WE ACT’s success includes engaging some 400 community members in the process. Khawarzad explains that it was easier than it may sound, since the organization has been working on the ground for decades — and knows that the community will move on ideas that are grounded in a framework for social equity.

It also included newer members, like Bailey, the woman whose neighbor first told her about the group after Obama’s reelection in 2012. She says it has felt fulfilling to step in and create a blueprint where the local, state, and federal governments have not. “Why is a private nonprofit pioneering the kind of work we need not only for major cities like New York, but coastal cities in the South like Miami and New Orleans?” she wonders.

Bailey is largely right:State and federal authorities have done little to plan for the inevitable impacts of climate change. But New York City Mayor Bill DeBlasio has introduced OneNYC, which focuses on sustainability (including a major shift to renewable energy) in the face of growing inequality. The Mayor’s Office of Recovery and Resiliency helped with planning and funding WE ACT’s climate action plan, and says its vision aligns with the mayor’s plans.

But now that the vision part of the WE ACT plan is set and even has the support of the mayor’s office, it’s still only a vision. What comes next is the policy phase — which will prove a different and potentially tougher battle. WE ACT is most focused on the energy democracy portion of its recommendations — think cooperatively owned microgrids. Northern Manhattan’s most vulnerable neighbors would be able to set the prices and control who the energy system services, while also taking advantage of the alternative energy system’s economic components, like installation and maintenance jobs.

WE ACT’s members know this kind of change won’t happen right away, but, as Khawarzad says, “the clock is ticking.” New York State has issued its energy reform vision, called REV, and WE ACT hopes that will speed up the regulation process — even as it knows that Con Edison, the giant New York utility, will likely attempt to slow things down.

Meanwhile, WE ACT is researching who can be a part of a microgrid — including identifying the people who own buildings and may be open to adding solar panels to them, explains Khawarzad. The group is also working to figure out how to finance a community microgrid project. And because, even with space and money, placing solar panels on Manhattan roofs remains a daunting challenge, WE ACT wants a change in regulations for alternative energy. These hurdles won’t be easily overcome. But the group’s success in formulating its Climate Action Plan suggests it has a good shot at seeing at least some of its vision turned into reality.