It’s bad enough to live close to a neighborhood oil well. There’s that nauseating smell, and the toxins that cause illnesses ranging from minor eye irritation to cancer. But it’s even worse to live next to oil wells that haven’t been subject to environmental impact review.

That’s the situation youth of color in Los Angeles find themselves in. They’re suing the city, alleging that the government has systemically violated regulations meant to protect residents from urban oil fields. As a result, they claim, majority white neighborhoods have ended up with fewer and cleaner wells, whereas neighborhoods of color have been saddled with a toxic mess.

Wilmington, a neighborhood in South Los Angeles, sits atop the third largest oil field in the U.S. (outside Alaska) — and that comes with consequences for the majority Latino residents that live there. “It smells like rotten eggs. It’s really disgusting,” says Angel Ocegueda, a 15-year-old Wilmington native who says he often feels the ground shaking because of oil drills and suffers from severe migraines and respiratory problems. Ocegueda is a member of Youth for Environmental Justice, part of Communities for a Better Environment (CBE), one of three plaintiffs in the suit filed Nov. 6 against the city in Los Angeles Superior Court. The others are the South Central Youth Leadership Coalition and the Center for Biological Diversity.

Coping with bad smells and health problems is a common plight in Wilmington, where young people as well as adults live close to oil wells — so close that they’re literally neighbors. I’m serious: People don’t just live close to working oil fields, they live next door to them. Oil wells and tanks dot Wilmington’s suburban streets, where houses and apartments are typically separated from the wells by a simple six-foot fence. Aside from homes, the wells are close to, or sometimes next to, places where children spend a lot of time — like schools, daycare centers, and baseball fields. Even the Wilmington Boys and Girls Club is directly next to an oil field; yellow school buses carry children to and from the club, which is separated from the oil site by a small brick wall. 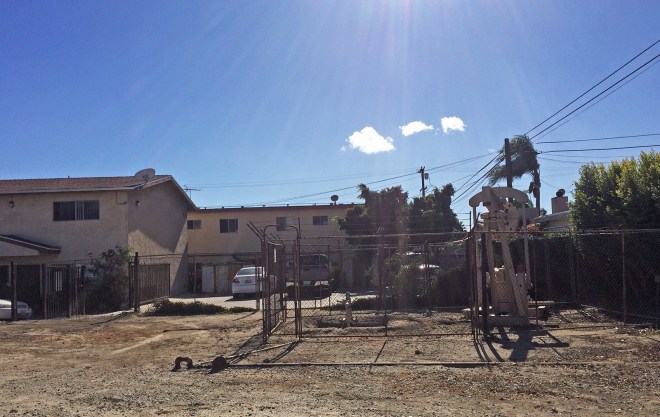 An idle E&B Natural Resources oil drill is next door to homes and a block away from Wilmington Middle School.Aura Bogado

Recently, I spent a morning visiting a few of these sites. Some of the wells, like one operated by E&B Natural Resources, don’t even have a wall or fence around the property. At the E&B site, I followed tiny shoeprints in the dirt that I assume were left behind by children running around the dirt on the oil field. I was able to walk right up to the drill itself, which has a flimsy chain-link fence around it. I might have stayed around and snooped longer had I not been overcome by the tremendous odor emanating from the well.

I’d just visited two active working fields (granted, both of those had a fence around the property), and they didn’t sicken me. But this idle one was releasing some kind of odor that made me keel over and vomit. I’m not sure what the exact culprit was, but these sites typically produce a cocktail of more than a dozen airborne toxins. If this is how spending some minutes next to an idle well can affect a grown woman, what does it mean for the children who live and play in Wilmington?

The oil well on the E&B field is next to a home on one side, an apartment building on the other, and just a block from a school. Some residents say they just get used to the odor after a while, but that’s rarely the case for visitors. In 2013, EPA agents were investigating hundreds of complaints by neighbors near a South L.A. oil field in the University Park neighborhood, owned by the Roman Catholic Archdiocese of Los Angeles and operated by AllenCo, when they fell ill during their inspection.

Local residents — 75 percent are people of color — had complained of respiratory problems, nosebleeds, and headaches since 2010, when the oil company increased its oil production. There was no environmental impact review, even though the 11 wells are as close as 30 yards from Frank Lanterman High School, a school for developmentally disabled youth. They’re nearly as close to Mount St. Mary University’s South L.A. campus.

As a regional administrator for the EPA, Jared Blumenfeld visits a lot of oil fields, but the AllenCo site made him and his fellow officials sick. “We suffered sore throats, coughing, and severe headaches that lingered for hours,” Jared Blumenfeld told the Los Angeles Times. AllenCo voluntarily shut down the site, but the firm hopes to re-open it soon.

Oil sites aren’t exclusive to the south side of Los Angeles. Some 5,000 oil and gas wells operate in the city, and not just in places like Wilmington or South L.A., but also in the more affluent, majority white neighborhoods of Wilshire and West Los Angeles. Yet the effects there are different. Take proximity: According to a Community Health Councils study published this year, outdoor oil sites are an average of 570 feet from homes in Wilshire and West Los Angeles. In Wilmington, where all the oil sites are outdoors, they’re an average of 139 feet away. And in South L.A., where they’re also solely outdoors, the average distance between a home and an oil site is just 85 feet.

Unlike the oil sites on the south side, many of the Westside sites are enclosed. The Packard site on Pico Blvd, for example, operates under a big building that blends into the surrounding community. Aside from the visual difference, the buildings provide soundproofing from the 51 wells that operate there. And since the production is kept indoors, you don’t smell the same nauseating odors — as I discovered when I visited recently. Although diesel rigs are used throughout the south side, the Westside sites most often use electric rigs, which also cuts down on pollution. Those kinds of enclosed oil sites on the Westside are, on average, 150 feet away from homes — which is still further away than the outdoor sites in Wilmington and South L.A.

The California Environmental Quality Act, or CEQA, ostensibly protects all of Los Angeles’s residents from oil wells. But the new lawsuit says that protection hasn’t been applied equally, which undermines the statute’s very purpose.

“The city, we’re alleging, has a pattern and practice of routinely exempting drilling activities from CEQA,” explains Gladys Limón, a staff attorney for plaintiff CBE. “The youth allege that the city has disproportionately exposed them to these dangers by creating less stringent rules for oil companies in their neighborhoods, where there are a vast majority of people of color, as opposed to those drill sites with a larger number of white residents,” says Limón. 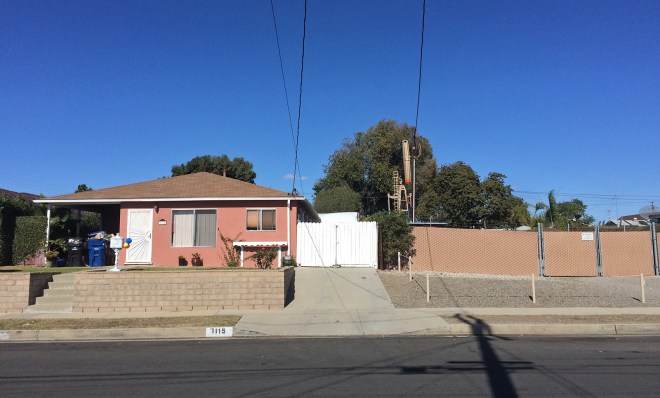 The suit essentially has two parts, a “pattern or practice” claim and a civil rights violation claim. The former isn’t too unusual — it’s used in lawsuits when a government agency neglects or otherwise fails to fulfill its obligations under the law. What is unusual is the civil rights portion, since it’s rarely been used in general and only recently in environmental justice cases. California government code section 11135 is the equivalent of Title VI of the Civil Rights Act of 1964 under federal law — it precludes any government agency that uses state funds from discriminating “on the basis of race, national origin, ethnic group identification, religion, age, sex, sexual orientation, color, genetic information, or disability.”

That doesn’t mean the City of Los Angeles will admit to any of the allegations — which is why a long legal battle is likely. “They’ll just flat out deny there’s any kind of civil rights issue in this case,” says David Pettit, a senior attorney with the Natural Resources Defense Council, who thinks the legal theory in the case is very strong. He’s watching the complaint because the NRDC filed a case with similar claims that’s going to court soon. “When you look at the map and look at … the oil drilling that’s subject to CEQA, they tend to be in [neighborhoods of color] in Los Angeles.” Most lawsuits settle out of court, but since the city will likely deny its practice, this case will probably go to trial.

Although this lawsuit by youth of color is unprecedented, it’s essentially demanding the City of Los Angeles comply with existing law. Because oil drilling is lawful, the lawsuit can’t demand the shutdown of these oil sites, no matter how close they are to residences and schools. Nor is the lawsuit seeking damages; it just asks the city to stop discriminating in its enforcement of the rules. The city will need to respond to the complaint. (The offices of city council member Joe Buscaino, who represents Wilmington, Los Angeles Mayor  Eric Garcetti, and Planning Director Michael LoGrande all failed to return calls to comment on the lawsuit.)

In the meantime, youth in Wilmington and other parts of Los Angeles that have oil wells for neighbors are organizing. The lawsuit is sophisticated and, at more than 40 pages, expansive. But for youth living next door to oil wells, it’s not all that complicated.

“Nobody should live around an oil drilling site — it affects your life, your environment, your health, and the way you live,” says Angel Ocegueda, the 15-year-old in Wilmington. “This is racism,” he says, adding that someone’s skin color shouldn’t determine whether or not they have to live next door to a polluting oil well. We’ll see whether the City of Los Angeles agrees.